Learning new things, staying engaged are keys to a sound body and mind 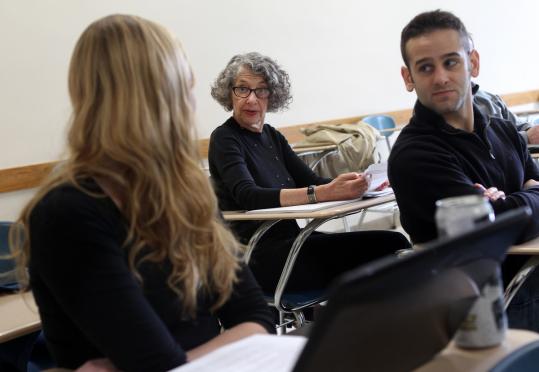 Dorothy Anger has taken nine courses at Boston University, ranging from film to foreign relations and the Middle East. But unlike the majority of her classmates, Anger is not in search of a future career path. Her working days are already behind her.

Anger, 69, retired several years ago after a career in grant writing and communications. In that time, she has become a dedicated student in BU’s Evergreen program, which allows adults 58 and older to audit undergraduate and graduate-level courses.

“I think this is one of the best times of my life,’’ Anger said. “I have enormous freedom to do whatever I want to do and I’m taking great advantage of it.’’

She also volunteers in her hometown of Newton, plays tennis twice a week, and travels extensively - Israel and Cuba are next on her list. Her schedule may sound loaded, but Anger is a model of what many aging specialists say older adults need to do to maintain a healthy lifestyle - both in body and brain: learn new things, stay socially active, and maintain physical fitness.

Most retired baby boomers today go directly from full-time work to full-time retirement, according to a 2011 AARP survey. But while spending some hard-earned days relaxing and napping on the couch may sound appealing, it will do little to help maintain an active and healthy mind, according to aging specialists.

The worst thing retirees can do - especially those accustomed to decades of long, stressful days - is stop challenging their brains with new tasks and experiences. Dr. Anne Fabiny, chief of geriatrics at the Cambridge Health Alliance, said retirees should be changing paths, not speed.

Based on her medical practice, Fabiny said those boomers who age well are also the most engaged in the world, in a variety of ways. “They are taking classes and going to lectures, read the newspaper every day,’’ Fabiny said. “It’s maintaining an engagement with the outside world. They don’t change that engagement fundamentally.’’

And it does not have to be all intellectual pursuit; Fabiny said other common activities include volunteer work, being active in your church or temple, minding grandchildren, and staying connected socially.

Researchers do not yet have enough evidence to say that one specific factor speeds up or prevents cognitive decline, said Dr. Mark Simone-Skidmore, who works at the Center for Older Adult Health at Brigham and Women’s Hospital. But they do know a lot about how the brain works and what happens as it ages.

Many of the same factors that keep the heart healthy also benefit the brain, Simone-Skidmore said. Conversely, high blood pressure, high cholesterol, diabetes, and smoking - all of which can increase the risk of a heart attack - can also damage the blood vessels of the brain, leading to a major stroke or reduced blood flow, called ischemic changes. That is why exercise and a healthy diet continue to be important as we age.

The brain also behaves much like a muscle. Without regular exercise and strength training, a bicep or hamstring will atrophy; when not challenged to process new information, the brain also loses strength. “If you don’t use it, you lose it,’’ Simone-Skidmore said.

He and others stress that 65 is not a magic number. Changes start to occur in the brain as part of the normal aging process as early as the 50s, even in the late 40s for some. Problems with short-term memory - word recall, forgetting your keys - are common, and older adults start to process information more slowly.

Just like Arnold Schwarzenegger can never get back the body he had at 20, an older mind cannot be as sharp as it was in younger years, Fabiny said. But that does not mean the brain cannot be maintained. Learning a new language, for example, is one of the hardest tasks for the brain because it exercises multiple areas.

Dr. Tom Perls, who studies people who live to 100 as head of the New England Centenarian Study at BU’s School of Medicine, said heavy weightlifting for the brain means learning something that is both new and complex, but which could be as basic as playing Sudoku puzzle games for the first time.

When adults challenge themselves to master something new, it builds up the part of the brain responsible for the task, which increases what’s called functional reserve, Perls said.

“So if there is something brewing like Alzheimer’s, it will probably require more time for the disease to have an impact on you, because there are more connections it has to attack, before there is an any impairment in memory.’’

So what does that mean for people hoping to make the best of their retirement years? You may have no choice. Your parents’ generation may have considered age 65 old; but the average life expectancy today is about 81 years, Perls said, which means plenty of opportunities to, say, brush up on high school French, or learn about Islam, as Dorothy Anger plans to do.

Nancy Reardon Stewart can be reached at nance.stew@gmail.com.