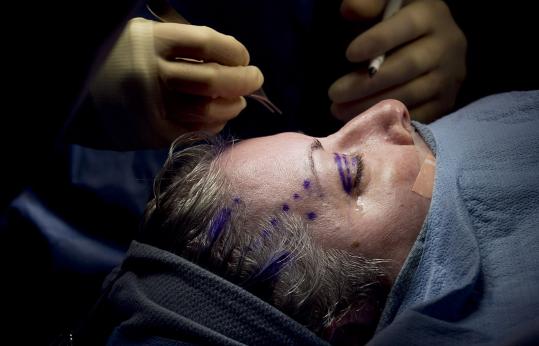 Debra Haining lay in a hospital bed at Massachusetts General Hospital, awaiting surgery. Both eyelids were colored purple, and blue dots were drawn on her forehead, including one on each temple, and one above her left eye.

The dots indicated the location where she feels the migraine, the trigger points, where the pain strikes. She is 57 years old and says that she never had a headache until five years ago, when she woke up feeling as if she’d been shot through the head.

She was forced to spend nearly every day in bed with the curtains drawn. She could not tolerate light, smell, or sound. Typically she rose only to see her 12-year-old son off to school in the morning and in the afternoon when he returned. Until recently, she had an ice pack to her head and could not drive a car.

He operated on her last month to relieve the pressure on the nerves believed to cause the pain in what is still a relatively new procedure.

An estimated 36 million people, or 10 percent of the US population, suffer from migraine, according to Cathy Glaser of the Migraine Research Foundation, a New York-based national organization that raises money for research and provides informational resources to sufferers. Three times as many women as men are afflicted.

Migraine is not merely a headache, but a constellation of neurological symptoms that may include nausea and visual disturbances.

The nerve decompression procedure is one of at least five new migraine surgeries, ranging from closing a hole in the heart to implanting electrodes to stimulate the nerves, Glaser says. These surgeries are only for “the very worst cases,” she says, the people who have already tried pharmaceutical and behavioral therapies. “The truly desperate.”

Haining says she was tired of doctors who suggested that she learn to accept a lifetime of pain, pills, and shots, and was relieved to find a doctor who offered to treat the cause of the migraine and not just the symptoms. “When you are debilitated and life comes to a halt, you are willing to try what’s out there.’’

In the operating room at Mass. General, Austen began surgery on Haining by making an incision in one of her eyelids in what would appear to be a routine blepharoplasty, a cosmetic surgery known as an “eyelid lift.”

Haining would benefit cosmetically by removal of this globular flat that settles into each eyelid with age. But the point, Austen says, is that this particular procedure provides “easy access” to the critical sensory nerves around her eyes that he believes were causing migraine pain.

This was just one of the three trigger points that Haining identified prior to surgery, and as he operated, Austen would be seeking a structural reason for that pain, a nerve compressed or impinged by surrounding bone or soft tissue.

This surgical approach was developed 12 years ago by Dr. Bahman Guyuron, chairman of the plastic surgery department at University Hospitals Case Medical Center in Cleveland, after several of his plastic surgery patients reported that their migraines improved after a cosmetic procedure known as a forehead lift.

At about the same time, other women reported migraine relief after they had received Botox injections that cosmetically smoothed their furrowed brows by paralyzing muscles. “We put two and two together and designed a surgical procedure to help these patients,” Guyuron says.

In the early days, one of the challenges of the surgery was getting patient referrals from neurologists who were skeptical about the approach, he says. Some migraine patients were willing to try the experimental procedure since they would receive the cosmetic enhancements.

After years of successful results on migraines, the surgery took off, and Guyuron says he has since trained some 250 plastic surgeons who practice the procedure worldwide.

A study published in the journal Plastic and Reconstructive Surgery in 2009 — led by Guyuron and submitted by Case Western Reserve University, the American Migraine Center, and the Center for Headache and Pain, Cleveland Clinic — found that just under 85 percent of patients who underwent the nerve decompression surgery reported at least a 50 percent reduction in migraine, calculating pain, frequency, and duration.

Nearly 60 percent (28 of 49 patients) reported a complete elimination of pain. This compared with only 1 of 26 patients who had a sham surgery, in which the surgery was limited to exposure of the nerve but muscle and attachments were left intact. Reported side effects included forehead numbness, temporary hair loss and itching, a slight hollowing of the temple, and small change in eyebrow movement

The surgery “certainly does help people,” says Glaser at the Migraine Research Foundation, but she cautions that while the study was rigorously designed, it was conducted on a very small population of sufferers. “It’s hard to extrapolate from these small populations,” she says. “You have to be very careful when you read headlines about cures.”

Austen, the only Boston-area plastic surgeon who received Guyuron’s training, began offering the migraine surgery in Boston four years ago, but says he only performed a handful a year until recently. In the last year, a few major insurers such as Blue Cross and Blue Shield of Massachusetts began reimbursing for the procedure when deemed medically necessary.

For self-pay patients, the estimated cost including doctors fees and hospital charges is between $5,000 and $10,000, depending on the number of trigger points, according to Austen, who now performs one to two of these surgeries a week.

He says that each new case confirms his belief that compressed nerve branches are both the cause of, and the solution to, his patients’ migraine pain. “Eighty percent of the time when I go to release a nerve, I find something anatomically wrong.” he says, such as a band around a nerve, or a nerve that comes through a hole in the bone instead of a notch.

As he explored the trigger point around Haining’s right eye, Austen discovered a fibrous band compressing the blood vessels at the bone right above the eye.

He pointed out the tiny vessel to his assistant, Dr. Neil McMullin, an Army major there to learn these plastic surgery techniques. Austen snipped the band, and noted how the vessel immediately began to plump up with the proper blood flow.

Later in the surgery, Austen removed nerves in the forehead area where Haining had indicated trigger points. He also gently pushed back into place a deviated bony septum that touched the sidewall of her nose, possibly irritating nerves.

The entire operation took about 2½ hours.

This was Haining’s second surgery. In December, Austen operated on her most painful trigger point, the occipital nerve that runs down the back of her head.

Haining says she woke up after that first surgery headache-free. But with the extreme pain gone, she later became more aware of duller migraine pain behind her eyes and at her temples.

She says she was not alarmed or apprehensive about needing more surgery. “Dr. Austen had explained to me that that could happen.”

Two weeks after her March surgery, Haining was optimistic. In a telephone interview, she says she is still a little sensitive to light, but is “pain-free” and feeling great. “I spent the last two days enjoying the fact that I could dust the house and do laundry. . . . I’m grateful for every day.”

Jan Brogan can be reached at janbroganbooks@gmail.com.

7 common headaches and their causes