Turns out, humans aren’t the only ones who need to drop a few pounds 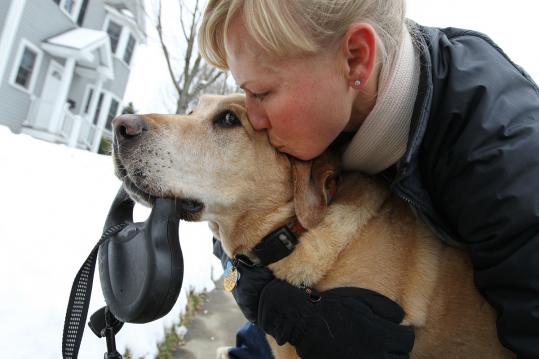 "I was in denial," said Lindsay Massengale, whose dog, Kona, gained 20 pounds when she switched his dog food. "Now when I look at pictures of him [before he slimmed down] I can see it," she said. (Pat Greenhouse / Globe Staff)
By Beth Teitell Globe Staff / January 26, 2012
Text size – +

Mayor Tom Menino’s promise to help Bostonians lose a stunning 1 million pounds this year is at once ambitious and doesn’t go far enough. Our cats and dogs need help, too.

Where’s Michelle Obama when you really need her?

Excess feline and canine weight can lead to serious health problems, including arthritis, diabetes, kidney problems, cancer, and shortened lifespan. But you wouldn’t know that from looking on the Internet, where nothing’s cuter than a pet with a muffin top.

“In our culture,’’ said veterinarian Ernie Ward, “a fat pet is a loved pet.’’

Ward, the founder of the pet-obesity prevention group, blames the “super sizing’’ of American pets on several factors: the growth of sugary pet treats; the normalization of obesity in the human population; and the trend of rewarding pets with food for everything they do.

“You’ve got 10-year-old dogs who get a treat for taking a potty break,’’ Ward said.

But good luck to the vet who tells an owner that his furry friend is fat. Some pet parents counter with excuses - “He’s big boned,’’ they’ll say, or “She’s really fluffy.’’ Others simply switch vets.

“We never went back,’’ said Dorothy Schlicting, 85, of Belmont, as she shopped for cat food recently. Incensed that her vet used the “o’’ word to describe her beloved cats, Kitty Cat and Nicholas, Schlicting took her business elsewhere.

“I didn’t like the idea of him telling me I had fat cats,’’ she said. Never mind that at 26 and 25 pounds, respectively, her felines weigh about twice what they should. The vet’s assessment hurt. “They are well-loved,’’ Schlicting said.

As for the food she feeds them, it’s decidedly not diet. “I tried,’’ she said, grinning like an indulgent grandparent, “but they didn’t like it.’’

That, it turns out, could be a good thing. A study published in 2010 by the Cummings School of Veterinary Medicine at Tufts University found that owners who give their pets diet food may inadvertently feed their animals too many calories.

Diet pet foods, the Tufts researchers concluded, vary widely in calorie density, meaning that a cup of one diet food may have many more calories than a cup of another diet food.

And how many calories does kitty need a day? It can be hard to tell. The Tufts team found a variation on daily caloric-intake recommendations among brands, making the pet owner’s job that much harder.

(You might recall that Jerry and Elaine faced a somewhat similar problem on “Seinfeld,’’ as they gained weight eating what they thought was diet frozen yogurt.)

But as nice as it would be to blame diet pet food, it’s not the only culprit, said Deborah Linder, co-author of the Tufts diet pet food study, and a second year resident at Tufts veterinary school.

“When we do nutrition consults, the first thing we do is a full diet history,’’ she said. “People are surprised when I ask them about treats. They say, ‘Why does that matter?’ But a dental chew or a raw hide can be 75 to 100 calories. Those can add up.’’

And quickly, says Michael J. Rosen, the author and editor of numerous pet-related books and anthologies. “Remember, one pound on a six-pound toy dog is like a person of 125 pounds packing on 20 pounds.’’

Animals who live in homes with two or more owners face additional challenges. In some homes, everyone wants to be the one to win the pet over with a treat or two, and the savvy animal works this to its advantage - or perhaps its disadvantage - getting double or triple the treats. In other households, one “parent’’ may be on board with the diet, while the other sneaks kitty scraps.

But cutting back on pet food can be hard - for owners that is, said Linder. Many owners worry that they’re being “mean’’ to their animals, or that they’ll be hungry, when that’s not the case. “They would probably be happy with a walk or extra attention,’’ she said.

But as humans know all too well, weight can sneak up on you. That’s what happened to Kona, an 8-year-old yellow Labrador in Newton, whose owner inadvertently switched to more fattening food, and then didn’t notice the pooch’s almost 20-pound weight gain.

“I was in denial,’’ said Lindsay Massengale, 35, a women’s soccer coach at Northeastern University. But friends’ comments - and a trip to the scale for Kona - forced her to confront the truth.

“Now when I look at pictures of him [before he slimmed down] I can see it,’’ Massengale said. “I wonder, what was I thinking?’’

Here’s another question for owners of plump animals: What are people at the dog park saying? Wendy Pierce, a publicist with a Labrador/Golden Retriever mix, reports that at her dog park, in Brookline, owners of healthy-weight dogs regularly gossip about a woman with a fat dog (whose breed is being withheld for diplomatic reasons).

“It’s just like when you have kids,’’ Pierce said. “Everyone likes to judge.’’

No less a pet authority than Claudia Kawczynska, editor in chief of the Bark magazine, worries about such whispered comments. Two of her dogs are normal weight -the German Wirehaired Pointer and a Border Terrier mix - but her two so-called “Southern girls’’ don’t have waistlines.

“Beagles are notorious for not having slim hips,’’ Kawczynska said, somewhat defensively, adding that she feeds them a healthy diet and has started cutting down on treats. “Not that anyone has ever said anything,’’ she said. “At least not to my face.’’

Meanwhile, as the pet obesity problem escalates, owners who think they have normal-weight pets would be wise to consider the words of Jordan Holt, owner of Tall Tails doggie day care in Woburn. “The fatter the dog,’’ he said, “the more defensive the people.’’