THIS STORY HAS BEEN FORMATTED FOR EASY PRINTING
g cover

Stretching the boundaries of yoga

The practice, associated mostly with the health-conscious affluent, may offer low-cost treatment for back pain and other ailments 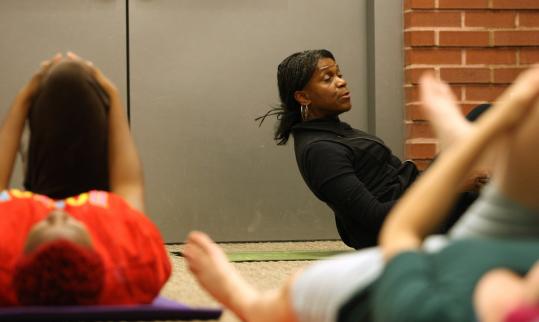 The lights are low, the music soft, as eight women lie on mats and follow the command to let their knees drop to one side, look over their opposite shoulder, and let out a long breath. Instructor Anna Dunwell leads them gently from one pose to another.

The yoga class, held in a Boston Medical Center lobby for staff and patients, features postures vetted for people with back pain. It was a prototype for an ongoing study exploring the use of yoga in the city’s poorer neighborhoods.

“You have yoga studios on every corner in Wellesley,’’ says Dr. Robert B. Saper, director of integrative medicine at BMC. “That’s not the case in Roxbury.’’

A survey of 5,050 people who practice yoga, conducted for Yoga Journal in 2008, found that 44 percent - almost half - reported annual incomes of $75,000 or more, and 24 percent said their income was higher than $100,000. Chronic low-back pain annually affects between 5 and 10 percent of all income levels of the population; low-back pain accounts for $50 billion in direct medical expenditures and is the most common cause of workers’ compensation, according to national health studies.

Because many yoga postures stretch and strengthen the muscles affecting the back, at least 10 published studies have been done on yoga and chronic low-back pain, says Saper. But though the majority have shown yoga to be promising as a low-cost treatment, all have been done on predominantly white, educated, affluent populations, he says.

“In our patient population, it’s unusual to have back pain alone as a single problem,’’ Saper says, noting that many patients also suffer from hypertension, diabetes, obesity, depression, and anxiety. And while he emphasizes that he doesn’t consider yoga a “panacea for everything, ’’ he says that “because of the mind-body component of yoga, we’re aware that [it] may be helpful for a variety of patients with co-morbidities. And that it may help with depression, anxiety, and resilience.’’

Saper is lead author of a pilot study published in a 2009 issue of Alternative Therapies in Health and Medicine that recruited 30 subjects from Codman Square Health Center and the Dorchester House Multiservice Center. A randomized controlled trial compared weekly hatha yoga classes to a control group that received standard treatment including doctor’s visits and medication.

The yoga group received one 75-minute class each week that included postures, deep breathing, and meditation. They were also given an instructional CD and equipment to practice 30 minutes a day at home. After 12 weeks, the yoga group reported one-third less pain and an 80 percent decrease in pain medications. The control group reported a decrease in pain of 5 percent and no change in medication use.

Nawar Naouri, a 28-year-old student and waitress from Dorchester, had been suffering from debilitating back pain when her doctor recommended the BMC yoga class that was used as a prototype. She now goes twice weekly and tries to do 20 minutes of yoga every morning in her home. “These poses put everything back in place,’’ she says. “It’s a balance issue. If I stop doing it, I have a lot of pain when I walk - and I walk everywhere.’’

In the study class itself, one participant reported an increase in lower back pain that improved after stopping yoga. And one patient refused to take part in the savasana “relaxation’’ component that concludes a yoga class because of a perceived conflict with his religion.

Overall, results were encouraging, and Boston Medical researchers received a $2.7 million grant to conduct two additional studies. The first, which is currently ongoing, enrolled 96 participants in a four-month “yoga dosing’’ study that will compare once-a-week yoga classes to twice-weekly classes to find the optimum effectiveness. The classes are held at Boston Medical Center and community health centers in Dorchester, Mattapan, Roslindale, and South Boston.

A third yearlong study begins in 2012 and will recruit 320 participants to take yoga classes for 12 weeks that will be followed by a maintenance program for half the participants. This study will compare yoga treatment to physical therapy, as well as to a control group.

“We hypothesize that yoga classes will be as effective as physical therapy, but more cost effective,’’ Saper says, adding that if research results bear this out, private, state, and federal health insurance programs might consider reimbursing yoga as a less expensive treatment.

In another study, published in 2007 in the Journal of Alternative and Complementary Medicine, researchers at Boston University School of Medicine and McLean Hospital used sophisticated magnetic resonance imaging to scan the brains of participants before and after a yoga class. They found that levels of a neurotransmitter called gamma-aminobutyric, typically low in people with depression or anxiety disorders, increased by 27 percent after participating in a session of yoga. (GABA modulates dopamine, glutamate and is related to serotonin.)

A follow-up study in 2010 at BU compared results with a control group that walked an hour on the treadmill three times a week. Participants who spent the same amount of time doing yoga classes instead had greater increases in positive mood and a greater decrease in anxiety throughout the 12-week period.

Chris Streeter, lead author of both studies and an associate professor of psychiatry and neurology at Boston University School of Medicine, used the same brain scanning technique on two participants of Saper’s chronic low-back pain pilot study and found a similar rise of GABA levels. At the conclusion of the 12 weeks, one patient who had suffered from severe depression said it was mild; another patient who began with moderate depression said it was gone.

Streeter says that yoga helps with balance and can reduce stress. “But you have to be careful not to over-promise. The effectiveness of yoga on mood may depend on the individual. For a person who hates yoga, it may not work.’’

Jan Brogan can be reached at janbroganbooks@gmail.com.