Push is on to stay one step ahead of cancer 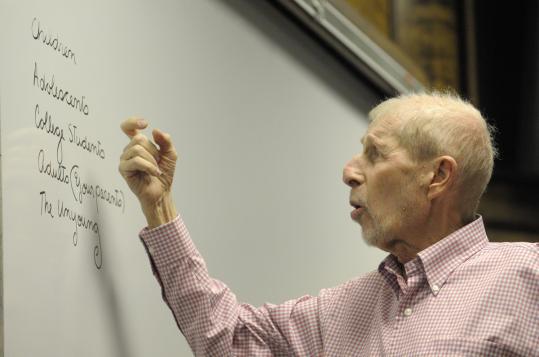 Martin Farkash, a psychologist in Florida, had success fighting his melanoma in a trial program, but the cancer has returned. (Phelan M. Ebenhack/Associated Press)
By Carolyn Y. Johnson Globe Staff / November 21, 2011

Targeted drugs that attack the genetic machinery of cancer with laser-like precision are, in a select group of patients, melting tumors away, often with few side effects. The problem is, almost invariably, these medications eventually stop working.

That is fueling an urgent push to discover why cancers become resistant to so-called smart drugs and to develop new therapies - or combinations of drugs - that can thwart the disease’s Houdini act.

At some hospitals, doctors are starting to request that patients whose cancer returns get a second biopsy, to help discern what has gone wrong. More than a dozen clinical trials are underway to test treatments for patients who have developed resistance to targeted drugs. And next year, the leading group of cancer scientists, the American Association for Cancer Research, will hold its first conference dedicated to resistance.

“It’s so much in our thinking today. As soon as we have an effective drug, we start thinking, ‘How does the drug begin to lose its benefit?’ ’’ said Dr. Pasi Janne, an oncologist at Dana-Farber Cancer Institute. “This is really rising to the forefront.’’

The push to do something about resistance is taking on greater urgency as pharmaceutical companies begin to focus on smart drugs - two major new ones were approved in the past year.

Because the new targeted treatments pinpoint specific weaknesses in tumors and scientists know how they work, there is optimism that researchers can develop medications or combinations that will have sustained effects. In the meantime, patients who thrived on targeted therapies are waiting.

Martin Farkash is one of them. An upbeat, 74-year-old clinical psychologist from Longwood, Fla., Farkash has been battling melanoma for seven years.

In October 2009, he enrolled in a trial at Massachusetts General Hospital for vemurafenib, a drug that targets a mutation in a gene called BRAF that is found in about half of patients with the deadly skin cancer. He responded well, and even jokes that one of the roughest parts of the treatment was traveling up from Florida every three weeks.

“I’ve never had any pain whatsoever, and was feeling great because the results of the drug were very, very good,’’ Farkash said.

The cancer had shrunk in three areas or lay dormant, but this summer a mass began to grow in his pelvic area. The cancer had returned.

Farkash’s doctor at Mass. General, Dr. Keith Flaherty, said it can be difficult to predict how long any patient will respond on a targeted therapy. The average response for patients on vemurafenib is about seven months, he said, but some people benefit for much longer and, unfortunately, some for shorter spans.

At Mass. General, he said, there are four trials of new treatments for patients resistant to the melanoma BRAF drug starting in the next few months and one near completion. There are at least 10 trials for patients who have developed resistance to targeted lung cancer drugs.

“It’s an explosion, partly because we’ve got some leads in terms of how to go forward,’’ Flaherty said.

Leads into the causes of resistance are now being sought before a drug reaches market. Last year, for example, while Mass. General researchers reported key early data showing the efficacy of the targeted Pfizer drug crizotinib for a small subset of lung cancer patients, a Japanese group published a paper describing two mutations that allowed the cancer to overcome the drug in a 28-year-old patient.

“People are thinking about this issue earlier on in the game,’’ said Dr. Neil Shah, an associate professor of hematology and oncology at the University of California, San Francisco, noting that it is now clear that resistance will crop up repeatedly with targeted therapies.

In the case of imatinib, an early smart drug aimed at a genetic defect in chronic myeloid leukemia, scientists discovered that when resistance develops, it is most commonly because of new genetic mutations that prevent the drug from binding to the target. That insight, Shah said, paved the way for the next generation of targeted drugs, which are more effective at overcoming resistance mutations.

Insights into how cancers resist drugs are fueling new research by drug companies. Many believe that drug cocktails, similar to the combination therapies that have transformed HIV into a chronic disease, will be the future for cancer. For example, earlier this year researchers presented promising safety data from an early trial that tested a combination of two targeted GlaxoSmithKline drugs in a subset of patients with melanoma. The hope is that if the cancer finds a way to evade one attack, another drug can stanch its workaround, keeping the disease in check.

Ariad Pharmaceuticals, a Cambridge company, is developing drugs that will block all the mutations through which a particular cancer could overcome a treatment.

Even with a strategy aimed at cutting off all escape routes, however, the company’s founder and chief executive, Dr. Harvey Berger, said it was important not to underestimate the opposition.

Farkash said he has not let cancer interfere with living - traveling, spending time with family, counseling, and teaching. The cancer has returned to only one area, for which he has received radiation treatments.

“I knew there was a possibility of it coming back,’’ he said. “And yet, on the other hand, I’m a very optimistic person and I always believe if I live long enough, they can come up with something for you.’’

Learn about carbon monoxide poisoning and the safe use of generators