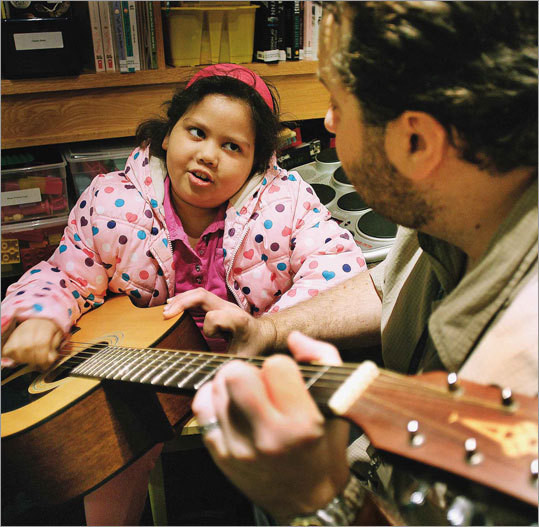 A little more than five years ago, music therapist Brian Jantz began to see a shift at Dana-Farber Cancer Institute and Children’s Hospital Boston, where he splits his time. Staff members, who previously would send him away when patients he was scheduled to see weren’t feeling well, started to call him with requests to visit people on their lowest days.

Nurses, doctors, psychologists, and other staff members had begun to realize what music therapists say they’ve known for decades, Jantz said: Music is more than just a fun distraction during a hospital stay. It can make people feel better.

Music connects people to their creativity and a sense of self, ‘‘that part of them

that is still healthy regardless of illness,’’ Jantz said. ‘‘In a way, cancer can’t touch that. And when you get patients in touch with that again, it really gives them hope. They become more optimistic.’’

Recent research lends credence to the idea that the emotional gains from music therapy can lead to physiological ones, too. A review of 30 studies, ranging from 8 to 260 participants, found significant benefits. Published in August by the Cochrane Collaboration, an international nonprofit that reviews th effectiveness of health care interventions, the review looked at the effects of music therapy and listening to recorded music on cancer patients.

Music therapy traces its roots as a formal field to treatment of World War II veterans. It has long been supported in nursing homes and special education settings. But integrating music as therapy — rather than simply entertainment—into the hospital setting, particularly in those arenas as intensely focused o evidence-based medicine as oncology, has taken more time, said Jantz and other therapists. Studies like the Cochrane reviewhelp.

‘‘As creative arts therapists, we need to communicate with people who operate from a very biomedical perspective, whose thoughts are often focused on survival and rehabilitation,’’ said Joke Bradt, lead author and associate professor in the Creative Arts Therapies Department at Drexel University.

The review authors noted there was a risk of bias in many of the studies, in part because they evaluate the music treatments based on subjective factors, such as mood and anxiety level. Of the 30 studies that qualified for review, only four focused on children and adolescents.

The benefits are clear for Amy Davis of Rockland, whose 4-year-old daughter, Phoebe, is in the middle o a two-year treatment for leukemia.

As Jantz was strumming on the guitar in a cozy corner of the Jimmy Fund Clinic and singing, ‘‘In the jungle, in Phoebe’s jungle,’’ Phoebe tapped away on the bongos. Davis said her daughter looks forward to these moments.

Music is an equalizer, she said. When Phoebe can’t play as others her age can because she feels weak or treatment has caused pain in her joints, she can sing or play an instrument, Davis said.

‘‘There’s just something about music that they don’t feel intimidated,’’ she said. Lorrie Kubicek, wh became a staff music therapist at Massachusetts General Hospital four years ago after doing contract work there for several years, said music therapy is distinct from other music projects that the hospital hosts, such as inviting volunteers in to play, in large part because of the relationship that can develop between patient and therapist. A therapist can evaluate a patient’s abilities and tailor sessions for the most benefit, emotionally and physically.

Kubicek described working with an adult patient, a woman she had been seeing for about five months, in ‘‘clinical piano lessons.’’

‘‘It’s not necessarily to teach her how to play Mozart,’’ she said. ‘‘It’s really about the process of really being able to express yourself.’’

Such lessons also can be about fostering self-esteem, reducing isolation that comes with treatment, strength building, and developing motor skills, she said.

Suzanne Rose, a nurse in the outpatient pediatric hematology and oncology unit at Mass. General, has seen the effects.

When Kubicek first started working with her patients, Rose thought the music was a positive distraction from the drudgery of being stuck in a cancer unit. Then Rose started to notice that patients who would tell her that they were feeling OK one day would then bang away on the cymbals during music therapy, as if they were getting out frustration.

‘‘As we saw Lorrie more in the clinic, and particularly with some of my patients, I saw how it was just such an outlet to express things that they just wouldn’t normally express,’’ she said.

Now Rose is working on a master’s thesis about music therapy, training to be a nurse practitioner. She wants to create a teaching tool to show other nurses the body of research explaining how music therapy works.

Research has been a priority in the field for decades, but funding has not always been easy to find, said Suzanne Hanser, chairwoman of the music therapy department at Berklee College of Music, which serves about 100 undergraduates. Though still difficult to get, Hanser said, funding for studies in medical settings has grown as hospitals have become more interested in ‘‘integrative therapies,’’ which can include massage, acupuncture, or meditation.

Bradt has written literature reviews about the use of music by people with coronary heart disease or on ventilators. One of Hanser’s studies was among those included in Bradt’s review on cancer treatment. Studies help ‘‘to explain why is it that music, of all things, this benign little thing that we surround ourselves with’’ can affect people on a physiological level, Hanser said.

But studies don’t always tell the full story. Hanser said they can’t, for example, fully measure the impact of a patient finding a moment of peace in the chaos of treatment or how that person is affected by being able to tap into that positive memory later during a difficult procedure.

Helen German, 9, of Lawrence, who travels to Dana-Farber every three weeks for treatment of acute lymphoblastic leukemia, said she visits Jantz every time she is at the hospital, and she looks forward to it.

Last week the two sang a song Helen had written during a previous session, ‘‘Magic is everywhere,’’ and practiced another she learned in school in preparation for a winter assembly. She strummed along with him on a smaller guitar.

Helen said the first time she played, she felt like ‘‘the music was inside me.’’

Chelsea Conaboy can be reached at cconaboy@boston.com. Follow her on

© Copyright 2011 Globe Newspaper Company.
Related
Your comment is subject to the rules of our Posting Policy
This comment may appear on your public profile. Public Profile FAQ