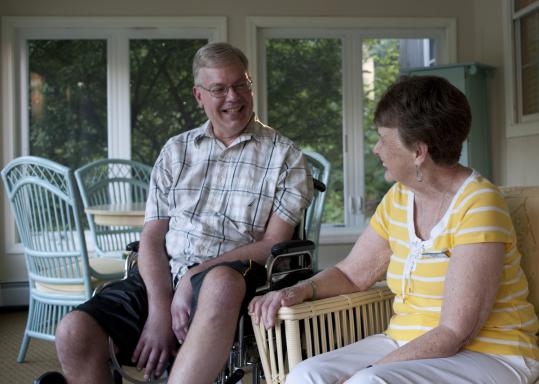 Barbara Swansburg and Richard Heidbreder chat during a visit at the Sawtelle Family Hospice House in Reading, where Heidbreder is a patient. (Essdras M Suarez/Globe Staff)
By Wendy Killeen Globe Correspondent / August 25, 2011

Barbara Swansburg was volunteering for a rare Saturday morning shift at the Sawtelle Family Hospice House in Reading when she was asked to feed the new patient in Room 7.

“I got up there and gave him his Danish and orange juice, and I came out of the room and said, ‘I know this man, where do I know him from?’ The voice and the mannerisms . . . there was something there,’’ Swansburg said. “I kept thinking about it all day. It drove me crazy.’’

When she returned to the hospice the next day for her regular Sunday visit, she asked a nurse the patient’s name. It was Dr. Richard Heidbreder.

“I said, ‘Oh my God,’ ’’ Swansburg recalled. “I called the volunteer coordinator and said ‘I am coming in to talk to you. I have a story you will never hear again.’ ’’

Thirteen years ago, Heidbreder, a radiation oncologist at Winchester Hospital, treated Swansburg for breast cancer. She had gone to him after a bad experience with another doctor.

“I was still pretty fragile and [Dr. Heidbreder] picked up all the pieces,’’ said Swansburg, 73, of Tewksbury. “He was very compassionate, very caring, and took all the time explaining [the treatment]. It was a very nice visit, and from then on, too.’’

A year later, Swansburg was in remission. She’d see Heidbreder at an annual gathering for cancer survivors, but hadn’t attended for a few years.

Meanwhile, Heidbreder, 59, of Reading, had been diagnosed with amyotrophic lateral sclerosis, also known as Lou Gehrig’s disease, in the summer of 2008. Weakness in his arms forced him to retire as medical director of Winchester Hospital’s radiation oncology service in November 2009.

In June, he moved into the hospice house.

As soon as she learned who he was, Swansburg told the hospice’s volunteer coordinator she’d like to come in Monday, Wednesday, and Friday evenings to feed Heidbreder. “I wanted to give back something,’’ she said.

When she told him who she was and what she wanted to do, Heidbreder was at first taken aback. But, she said, “It’s been great since then.’’ After dinner, they always watch “Wheel of Fortune’’ and “Jeopardy,’’ which Swansburg said is what she did with her late husband when he was hospitalized with cancer.

“It was instant bonding,’’ said Heidbreder. “We chat away and have fun. We ask about each other’s day and comment on news items, and then we try to beat each other at games. She’s outgoing and warm and it’s nice to see her three days a week and have her all to myself.’’

Heidbreder’s wife, Sue, a nurse in the breast care center at Winchester Hospital, said of Swansburg: “It’s nice to have someone who really cares about him. She cares about all of us. She’s become part of the family.’’ When Swansburg attended a cancer support group at the hospital many years ago, Sue Heidbreder was the coleader.

Anyone who knows Heidbreder is not surprised by the relationship.

“He is beloved,’’ said Kevin Smith, president and CEO of Winchester Hospital. “He is well respected for his clinical capabilities, but it goes well beyond that. He has a way of connecting with patients on a one-on-one basis and an ability to make them feel like they are the only one in the universe when they are in his presence. And his colleagues love him.’’

Kristin Desiata, manager of the hospital’s radiation oncology center, said Heidbreder struck a good balance between the business side of the center and patient care.

“He is old school but new technology,’’ she said. “He was receptive to taking on something new or urgent; very go with the flow. And he had the mentality you extend yourself to what patients need no matter what that means.’’

“Radiation oncology was the perfect place for me to be,’’ said Heidbreder, who has a degree in mechanical engineering as well as a medical degree. “I loved my job, loved my patients. I liked working with my staff and colleagues. It really was everything to me.’’

His approach, he said, was like that of a country doctor. He didn’t wear a white coat or sit behind a desk because they could be barriers between him and a patient. He also allowed as many as eight to 10 family members in on a discussion with a patient so all the information could be absorbed.

One consultation he particularly remembered: A woman’s husband came into the office and said his wife was too nervous to come in. “So, I said, ‘Why don’t I come out to the car and say hello?’ We got to talking and I did a whole consultation curbside; I sat in the parking lot for close to an hour. And she ended up being treated.’’

“I never tried to talk up to a patient or down to a patient, but thought they needed to be informed about what was down the road,’’ he said.

Heidbreder has the same philosophy concerning his own condition. “We certainly haven’t buried our heads in the sand,’’ he said. “We’ve done due diligence researching the disease and treatments, which aren’t many.

“I still have a mind and can speak and breathe; just the rest of me doesn’t work very well. So I have to rely on other people, like Barbara. I think it is always easier to give than receive. I’ve spent my life giving and now I am on the receiving end of things, and that’s hard for me. There are days when it gets overwhelming.’’

Also overwhelming, but in a positive way, is a $2 million gift to the hospital that will name the radiation oncology center at the new Center for Cancer Care after Heidbreder. The gift was made by Heidbreder’s colleagues at Winchester Laboratory Associates and Strata Pathology Services Inc. in Lexington.

“In 2007, Winchester brought radiation oncology under its own roof and Richard was the founding director. His staff and patients adored him. He’s just a great guy,’’ said Dr. Mark Zuckerman, chairman of the hospital’s pathology department and president of Strata. “We were in a position to put his name on the center. It was just the right thing to do. No one’s name other than Richard’s should be on that center.’’

Heidbreder said he was “flabbergasted’’ and “humbled’’ by the gesture.

“I have been winding down the road here,’’ he said. “Certainly, thoughts of leaving some kind of legacy and wanting to be remembered have started to come to the surface. But this is so far above what I ever imagined, and to have it while I am still alive and able to enjoy it, wow.’’

A dedication of the Dr. Richard Heidbreder Center for Radiation Oncology, 620 Washington St., Winchester, will be held Sept. 6.

In this edition of Be Well, Boston, we talk about the dangers of diet supplements.