Transformers: No gloves, no glory

Indya Sheehan, 33, breeds show dogs and is a groomer at Petco in Woburn. Having lost 70 pounds, she was looking for a way to get – and stay – in shape.

As told to Amy Sutherland

The girl who did my nails suggested: “You should try boxing.” I remembered when I was a little girl, I saw a female boxer and she was in beautiful shape. So I went to MK Boxing and signed up for a year. I was so confused at first [that] I thought I was never going to be able to box, but I had to stick with it, because I had spent the money for the membership.

The hardest part was learning the punches. The thought that someone is going to punch at you is very scary, but it was harder for me to punch someone else. I never punched anybody before. Maybe my younger brother when we were kids. But when someone is swinging at your head, you get comfortable quick.

At first, I went three days a week. After two months, I started going every day. Then I started going twice a day. Sometimes I go three times a day now. I’m lucky that I can arrange my workday around my boxing. It’s almost more important to me that I’m in good shape than working. Before it was the opposite, and that’s how I got so heavy. Everything was about work.

When I began I never had any intention of competing. Then the gym owner said I should think about fighting. If I’m good enough, why not? There’s a tournament in the fall. I hope there will be someone in my weight class. I think I’m ready. 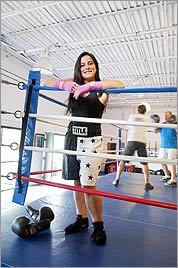