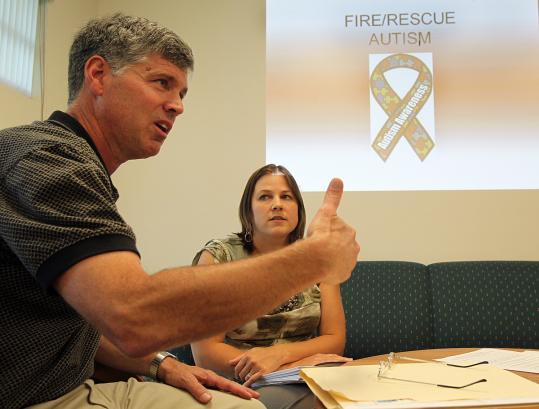 Westwood Fire Captain Bill Cannata has spent the last six years teaching first-responder firefighters how to recognize the symptoms of autism at an emergency scene so they know how to best approach someone with the disorder who is in distress.

The first-of-its-kind program, which has reached 17,000 professionals in all corners of New England, will now expand to 13 other states, including Oklahoma and West Virginia, with the help of a $52,780 federal Assistance to Firefighters grant from the Department of Homeland Security.

Cannata helped launch the Autism and Law Enforcement Education Coalition in 2005 as a collaboration with the Norfolk district attorney’s office and the South Norfolk County ARC’s Family Autism Center. Startup funding came from the Dedham Institution for Savings.

Today the program is funded through the Autism Spectrum Division of the state Department of Mental Retardation, to the tune of some $35,000 a year, augmented by various small grants. The new federal grant will allow Cannata and his business partner and the center’s director, Betsy Roche, to go national.

Both are thrilled with the financial boost, and the expansion it will allow.

“We love it, and we love to talk about it,’’ said Cannata, who has a child with autism.

The number of diagnoses of the developmental disorder has exploded over the last two decades, making their project’s educational work even more poignant and necessary, they said. The federal Centers for Disease Control says autism-spectrum disorders affect 1 in 110 children in this country.

Flashing police lights, the sound of sirens, acrid smoke, and strangers in their homes all add up to sensory overload for children and adults with autism, who might hide, try to bolt from the scene, or even attempt to run back into a burning home, Cannata said.

Responders should look for “stimming,’’ or physical movements like arm flapping to relieve stress, and people who hit themselves repetitively or become aggressive, he said.

The center’s training demonstrates how to diffuse panic, ask the right questions, and, especially, know what not to do in those tense situations, Cannata said. “For example, running and pinning someone down is a bad idea,’’ he said.

Rather, if firefighters have to act quickly, they can take a person with autism to a less frantic spot, or wrap them in a blanket to calm them.

“Give them space, geographic containment, and time,’’ he said.

Cannata and Roche said they are amazed at the calls of thanks from first responders who have put their new knowledge into practice, often shortly after completing the ALEC course.

As examples, they cited the time a Norwood boy who had set his house on fire was stimming on the lawn when firefighters arrived. Or the Hingham child who fell through thin ice but refused help, although he was freezing, because he was enjoying splashing around.

Or the young, nonverbal Stoughton child who was found alone at 5 a.m. at a bus stop, and who led a police officer down the sidewalk to his home once the officer stopped asking where he lived, and instead asked the boy to show him.

“When they got there, his mother was unaware he had wandered off,’’ Cannata said.

ALEC training lasts two hours, but Cannata said it’s not unusual for his entire class to jump up and leave in the middle of the presentation for a medical or fire call.

Training has also occurred at the Boston Police Department, the MBTA police recruiting program, and the Massachusetts Firefighters Academy, as well as through the state’s Department of Children and Families and the judicial and probation systems, Cannata said.

“What’s important for me is not only the first responders but also helping to build awareness in the community and a little more acceptance for autism,’’ Roche said.

She holds community programs that allow people with autism and their families to visit with the police and firefighters they may meet under other circumstances. The program also reaches out to schools.

Family participation is a big deal, and Cannata and Roche urge parents to have fire drills, work out exit plans, and register with their local police and fire departments so first responders know a person with autism lives in the home.

Closer to home, Cannata’s boss, Westwood Fire Chief William Scoble, praised his commitment to the program, which he runs independently of his full-time fire job.

“This is his passion, and it has been for a long time,’’ he said.

Town Manager Mike Jaillet agreed. “We are fortunate to have a member of our staff who saw a need and has fulfilled it,’’ he said.

A requirement of ALEC trainers - there are 10 presenters, including Cannata - is that all must be first responders and have family members with autism.

“I think that’s what makes this program unique,’’ Cannata said. “We are telling our story and what we go through as parents. But we also speak the same language. Many times firefighters have said to me, ‘We just had no idea.’ ’’

Michele Morgan Bolton can be e-mailed at michelebolton@ live.com.

How to avoid concussions in sports

Tips on staying healthy from Boston area health professionals and The Boston Globe.