The possible link of antidepressants to autism has expectant mothers worried, though the risk may be small 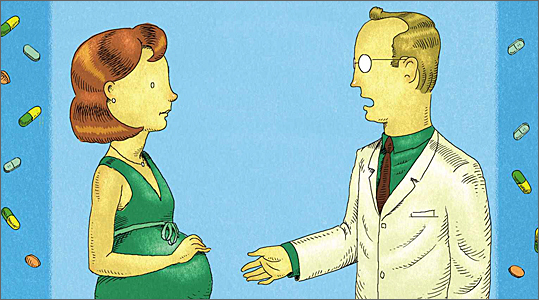 Try Googling “Prozac pregnancy’’ and you’ll get a sense of the fear and confusion surrounding the relationship between the two.

“Anyone with experience on Prozac?’’ asks a woman on the community page of www.babycenter.com. Prescribed the antidepressant by her doctor, she writes, “I’m just really concerned and frankly scared to take them after reading all these articles and research. I’m 20 weeks 2 days, and I’m supposed to start on 10mg of Prozac this morning, but I’m staring at it right now and I don’t know what to do - should I take it?’’

In the past decade there has been a flurry of research into the effects of antidepressants on pregnancy - in particular, on selective seratonin reuptake inhibitors (SSRIs), which include Prozac and are the most commonly prescribed such drugs. So far, findings published on their possible effects have been all over the map - from increased likelihood of pre-term delivery to poor adaptation by newborns because of withdrawal symptoms from the drugs.

This month, a report in the Archives of General Psychiatry by Kaiser Permanente researchers suggested that pregnant women who use SSRIs might increase their likelihood of having a child with an autism spectrum disorder (autism, Asperger’s syndrome, or other unspecified pervasive developmental disorders). Released in conjunction with a landmark study reporting that environmental factors may play a much larger role in autism than previously thought, the findings on antidepressants have fueled the debate over whether SSRIs can be harmful during pregnancy. (Some of the same researchers participated in both studies.)

Between 14 percent and 23 percent of women experience a depressive disorder while pregnant, according to a 2009 report by the American Psychiatric Association and the American College of Obstetricians and Gynecologists. The numbers are similar to those for women in the general population. Left untreated in pregnant women, depression has been shown to lead to such problems as poor fetal development and mother-infant bonding, and pre-term delivery.

What’s an expectant mother to do? How does she make a decision about whether it’s safe to use antidepressants when she’s suffering from a disorder that makes her more anxious to begin with?

“In pregnancy in general, we tend to be afraid of all medicine,’’ said Dr. Lori Wroble, the chief obstetrician for Harvard Vanguard Medical Associates at Newton-Wellesley Hospital. “And I think it’s actually scarier when you don’t have enough studies, because it’s an open-ended question that you’ll always wonder about.’’

There are so many new studies about the possible effects of medication on pregnancy that physicians can have trouble keeping up. At Newton-Wellesley, the Harvard-Vanguard group holds monthly meetings to discuss research trends - sessions that helped Wroble decide to usually prescribe sertraline, the generic equivalent of Zoloft, if her pregnant patients need medication for depression.

But try Googling “Zoloft pregnancy.’’ One of the first results? A TV commercial uploaded to YouTube called “Zoloft and Pregnancy Lawsuit.’’ The minute-long video lists the birth defects that allegedly have been linked to Zoloft, complete with background music of ominous piano chords. The website Zoloft-lawsuit.com has added the autism study to its information page, urging women to call for a free consultation.

One of the problems with linking medications to conditions like birth defects or autism is that while statistics on risk increases can seem alarming, the conditions themselves are relatively rare.

“People always concentrate on the risk, but the probability of having a perfectly healthy, vibrant little baby is very high,’’ says Dr. Lisa Croen, the study’s principal author and the director of the autism research program at Kaiser Permanente in Northern California.

Croen’s research team looked at the medical records of 1,805 mothers - 298 had children with autism, and 1,507 did not. Of the 1,507 mothers, 50, or 3.3 percent, had received at least one prescription for an SSRI in the year before giving birth. Of the 298 mothers with children found to have an autism-spectrum disorder, 20, or 6.7 percent, were prescribed SSRIs during the same time period.

Another reason it’s difficult to draw conclusions about the advisability of SSRIs during pregnancy is that researchers don’t know how to tease apart the risks of using the antidepressants from the risk posed by the depression itself.

“It’s very hard to know whether any effect that you know and see is due to the medications themselves or to the depression,’’ said Dr. Sengwee Darren Toh, an instructor at Harvard Medical School whose research focuses on the effects of different medications on pregnancy. “I don’t think we have an answer for that.’’

While the autism study’s design is good, he said, it’s too preliminary to use for any clinical recommendations.

So is it worth the risk for a pregnant woman suffering from depression to take an antidepressant?

The US Food and Drug Administration gives most SSRIs a “C’’ grade in its categorization for safety of medications during pregnancy. That means the drugs have shown adverse effects on fetuses in animal studies, but there isn’t enough data available on humans.

(The only exception is paroxetine, the generic equivalent of Paxil, which the FDA gave a “D’’ after two studies found that taking the drug early in pregnancy increased the risk of heart defects in babies from about 1 percent in the general population to 1.5-2 percent.)

Still, the FDA notes that the benefits of taking categories C and D medications may outweigh the risks.

But some pregnant women are so hesitant to take any medications that even their doctor can’t convince them otherwise. Vaccines are a case in point: Claims that autism is linked to thimerosal, a mercury-based preservative that is used in vials for medications and vaccines, were debunked years ago. Yet Wroble’s practice offers thimerosal-free flu immunizations.

“The fear factor is so great,’’ she said.

When it comes to antidepressants, if the patient is too scared to take them but Wroble believes they would help, the two find a compromise. Wroble will make sure the patient’s friends and family keep an especially close watch, schedule more regular doctor’s appointments, and set up counseling.

Then she’ll start the patient on antidepressants the morning after delivery.

Neena Satija can be reached at nsatija@globe.com.

Is there a connection between cell phones and cancer?