THIS STORY HAS BEEN FORMATTED FOR EASY PRINTING
In practice 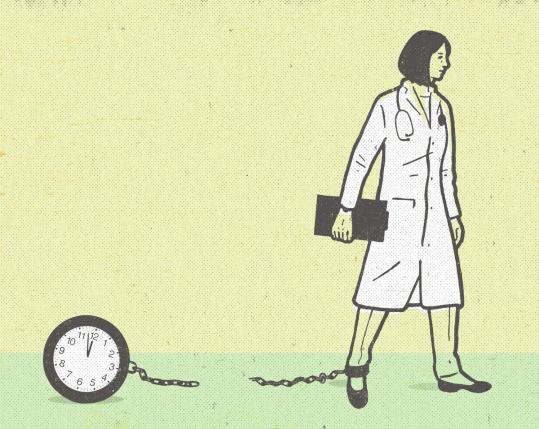 Though 17 years have passed, I never have trouble remembering exactly when my patient Irene was diagnosed with lung cancer - and that I wasn’t there for her. Admittedly, I had a pretty good excuse: I’d just had a baby. When Irene, a particular favorite of mine, a warm and intelligent woman in her 60s with an elegant British accent, underwent surgery, I was on maternity leave.

Despite the fact that one of my colleagues visited Irene in the hospital and saw that her recovery went smoothly, I felt guilty. When I returned to my practice part time, working three days a week to accommodate the needs of my growing family, that guilt compounded. An older male colleague, someone I respect greatly, once told me that the three most important qualities a primary care doctor can have are “accessibility, accessibility, and accessibility.’’ How could I call myself a primary care doctor if maternity leaves and part-time practice sometimes prevented me from being available to patients like Irene when they needed me most?

Gradually, the guilt subsided. I accrued a practice made up of patients who knew my schedule and accepted it. I trusted the doctors with whom I shared coverage. The development of encrypted electronic records allowed me to look up patients’ medical information and call them from home when necessary. It wasn’t perfect - at home or at the office - but I counted myself lucky to be able to forgo some income to have more time for Little League, Play-Doh, and even occasional solitude, as many working parents would if they could.

Having made peace with my decision to work part time when my kids were small, I was surprised at the depth of my alarm as I read a recent op-ed article in The New York Times in which Karen S. Sibert, a mother of four who works full time as an anesthesiologist, asserts that women physicians who work part time are betraying their patients, their full-time colleagues, and the taxpayers who partially subsidized their medical education.

Sibert points to the projected growing shortage of physicians in an aging America - a deficit of up to 150,000 in the next 15 years, by one estimate - as a reason why women who receive medical degrees should commit to full-time work. She notes that since women are more likely than men to enter primary care fields such as internal medicine, family medicine, pediatrics, and obstetrics/gynecology, in which the shortage of physicians is greatest, and are more likely to work in underserved communities, the loss of work hours when female physicians cut back is most sorely felt.

Maybe my personal history made me sensitive to Sibert’s scolding. Or perhaps it was the accompanying illustration, of a female physician wearing high heels and a stethoscope pushing a vacuum cleaner, a veritable “Physician Barbie,’’ that burned me up. But, after I cooled down, I took some time to consider Sibert’s argument carefully - and I still found it wrong.

It is true that nearly 50 percent of all American medical students are women and in some fields, such as pediatrics, women now make up at least three-quarters of all trainees. Clearly, under the current system, if in a few years most of these doctors are practicing part time, that would worsen the shortage, especially in primary care.

But it’s unfair to require women to work full time because they happen to be the ones who disproportionately choose to work in fields where there’s a shortage of doctors. Instead, primary care needs to be restructured and better paid to attract more physicians - women and men.

This is not only a women’s issue. According to a 2010 article in the New England Journal of Medicine, 21 percent of American physicians now work part time and one of the fastest growing segments of this group is older male doctors. A 2008 survey of 12,000 Boston-area physicians, men and women, found that 30 percent planned to cut back to part-time work in the near future.

Many factors contribute to physicians’ desire to work less, including increased recognition of physician burnout (not to mention higher rates of drug and alcohol abuse and suicide among doctors), increased numbers of malpractice suits, and increased paperwork as compared with previous eras.

Plus, male physicians are now more likely to want paternity leave and extra time to participate in childrearing than ever before. And both male and female physicians may desire a break from emotionally demanding patient care to teach, do research, or take on administrative roles.

With most medical school graduates carrying greater than $100,000 in loan debt, primary care, which pays the least and often requires the busiest and longest days, can be a hard sell.

Medicine remains one of the most satisfying, secure, respected, and well-remunerated professions. But the endlessly available solo practitioner, TV’s Marcus Welby, no longer embodies its ideal - for women or men. And even Dr. Welby signed out to take in a round of golf now and then. The reality is, while patients may become ill at any time, all doctors work part time. As one physician responded by letter to Dr. Sibert’s article: “The degree is a doctorate in medicine, not an application for martyrdom.’’

What then to do about the very real need for providers of medical care, particularly in primary care? Sibert’s answer is that women physicians should simply grit their teeth and work more, whether they want to or not.

And if they don’t want to, Sibert reasons, they shouldn’t have become doctors in the first place.

But this “Just Say Yes’’ approach is as unrealistic as it is coercive and patronizing. It ignores the increasing defection of male doctors from full-time work, for one thing. It also risks discouraging women, whom some studies show patients perceive to be especially empathic physicians and who are most likely to gravitate to those who need doctors most, from pursuing medical careers.

Rather, a revamping of medical care, particularly of primary care, is needed to attract and retain both men and women physicians. Already, new models in which physicians work in teams with nurse practitioners and other professionals are evolving. The shift in emphasis away from a single doctor as the source of care will take some getting used to from patients and physicians alike. And a payment scale that rewards a five-minute mole removal more highly than an hour spent managing diabetes and hypertension is being reevaluated.

I asked Irene recently whether it had bothered her that I was not available when she had her lung cancer surgery. (Yes, thankfully, all these years later she’s still doing great!) Her answer surprised me. She said that she felt well cared for because I had provided her with “an excellent proxy,’’ as she put it. In other words, my absence hadn’t gone unnoticed, but neither had I failed her.

Right now across the country, thousands of young women and men are preparing to move into dorms and student apartments, eager to start medical school.

Should we tell them to stay home?

Prevention and treatment of swimmer's ear is discussed with Dr. Raj Krishnamurthy.