Strapping on a pedometer helps get people moving toward dropping weight and blood pressure. Making it competitive leads to even better results.

When Andrew Dreyfus became chief executive of Blue Cross Blue Shield of Massachusetts last fall, he knew he’d no longer have time to hit the gym, so he decided to attach a $15.95 pedometer to his belt every day to keep track of his steps. Now he climbs the eight flights to his office, takes the farthest space in the mall parking lot, and conducts walking meetings, as he did for our interview on June 7. We logged 1,200 steps on the Greenway in about 15 minutes.

Dreyfus has even enlisted his 12-year-old daughter, Leah, in a daily competition to see who can accumulate the most steps, with each aiming to get at least 10,000 a day. “It’s the first question I get when I walk in the door,’’ says Dreyfus. “If I’m beating her, she’ll start walking around the house.’’ Leah, in a separate interview, said it was her dad who “took the long way around the house’’ if he came home to see he was behind. She accumulates her steps walking around her junior high school corridors, on the basketball court, or having friends chase her around the gym.

Strapping on a pedometer and aiming for the daily 10,000-step goal — equivalent to 5 miles — first caught on several years ago after studies suggested that the method really works to help couch potatoes get up and moving. One 2007 review published in the Journal of the American Medical Association, which looked at 26 studies involving nearly 2,800 participants, found that those who wore pedometers and were given specific step goals for a few weeks to several months increased their physical activity, lost excess weight, and significantly decreased their blood pressure compared with those who were told to simply walk more without any pedometer or goal.

But the JAMA study researchers also questioned whether people would actually stay motivated beyond the few months of the study. Like any exercise gadget, the novelty of wearing a pedometer can wear off pretty fast. And many of us have gotten used to sitting at desks all day, making it a hard habit to break. In a study last month, researchers from the Pennington Biomedical Research Center in Baton Rouge, La., reported that fewer than 20 percent of jobs now involve moderate physical activity, compared with half of jobs in the 1960s. They estimated that calories burned in the workplace have decreased by more than 100 calories a day, which could be contributing to the obesity epidemic.

Now, some experts believe they’ve found the X factor to get people to step it up over the long haul: competition. Blue Cross Blue Shield of Massachusetts last year reported it had successfully improved the fitness level of 160 firefighters in seven cities by having them keep track of their steps for a 12-week competition. The winning station, in Hudson — where firefighters averaged more than 14,000 steps a day — received a $2,000 wellness grant to be used for other wellness initiatives. Several participants in the program experienced a weight loss of 10 pounds or more, enough to lower their blood pressure and blood glucose levels, which reduced their risk of heart disease and diabetes.

Blue Cross sales director Gloria Paradiso says she found that the competition pitting her sales team against others was a huge motivator for her when she participated in a company pilot program two years ago where she attached an accelerometer to her shoe for several weeks. The gadget — similar to a pedometer but designed to measure any foot movement like jiggling or tapping — automatically transmitted daily accumulations to a computer network whenever she passed by a wireless hot spot.

“After my father’s wake, I logged on to the site and saw I was behind in the competition and didn’t want to let my co-workers down,’’ says the 50-year-old from Grafton. She immediately started walking more, first a 3-mile loop and then a 5-mile one, which made her feel like she was contributing to her team and also allowed her to work through grief over losing her brother and father in the same year.

For the average American taking about 5,500 steps per day, will adding a few thousand more really do much to improve a person’s health? “What we find is that when it comes to physical activity, more is better,’’ says James Hill, an exercise researcher at the University of Colorado and author of “The Step Diet.’’

In a 2007 study published in the journal Pediatrics, Hill and his colleagues randomly assigned nearly 200 families of overweight children to either make two small changes — adding 2,000 steps a day to what they were routinely recording on pedometers, and cutting 100 calories a day by switching to sugar-free sweeteners and beverages — or to self-monitor themselves for activity and food intake. After six months, children in both groups experienced a small drop in their body mass index but the group who wore pedometers had better results. (The adults in both groups lost an insignificant amount of weight, but at least halted the typical weight creep.)

What’s more, the pedometer wearers maintained their lifestyle changes for at least a year after the study ended. “The feedback we got from them was, ‘Oh my gosh, this is so easy, give us more,’ ’’ says Hill.

That’s the attitude Robert Giles takes in his approach to accumulating steps. The 47-year-old member-service representative for Blue Cross Blue Shield of Massachusetts managed to lose 70 pounds over the past 18 months by building in changes gradually over time, following the principles of Weight Watchers and using a treadmill work station at the office three times a week for an hour at a time.

“Typing while walking wasn’t as hard as taking notes or navigating with the computer mouse,’’ says Giles, who lives in Carver. “But it got easier, and after a while it was second nature.’’ To step it up a notch, Giles, along with more than 700 Blue Cross employees, last month entered an accelerometer competition, pitting himself against colleagues from other departments to win cash prizes. He’s now logging 9,500 steps a day.

Other companies, too, have caught on to the accelerometer craze — most likely in an effort to reduce employees’ health care costs. While Blue Cross hasn’t finished compiling health data from its employee walking programs, the offshore oil rigging firm has seen results from accelerometer competitions undertaken by 1,000 employees in its offices and on its rigs.

Some 15 percent of the competition participants whose high LDL cholesterol levels put them at high risk of excessive health care costs at the beginning of the challenge were no longer in that category by the end; neither were 17 percent of those who had high blood pressure before the challenge, nor 7 percent of those who started off obese, according to Frank Napolitano, president of GlobalFit, a company that has provided accelerometers to KBR and nearly 40 other companies, reaching 40,000 employees over the past few years.

Carole Lang, 66, a legal assistant at the Fox Rothschild law firm in Stamford, Conn., has been using an accelerometer provided by GlobalFit since March and says that while her firm provides a monthly drawing for a $200 gift card for those who meet the 4,000-step-a-day challenge, the prizes aren’t what motivate her to walk more. “I’m competitive with myself and can see how much I’ve walked today compared to what I walked in the past. I want to walk more each day because of who I am.’’

Deborah Kotz can be reached at dkotz@globe.com. 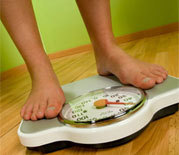 Find fitness tips, advice from experts, inspiration and more.
Your comment is subject to the rules of our Posting Policy
This comment may appear on your public profile. Public Profile FAQ