Patrick Kennedy’s new cause: the brain 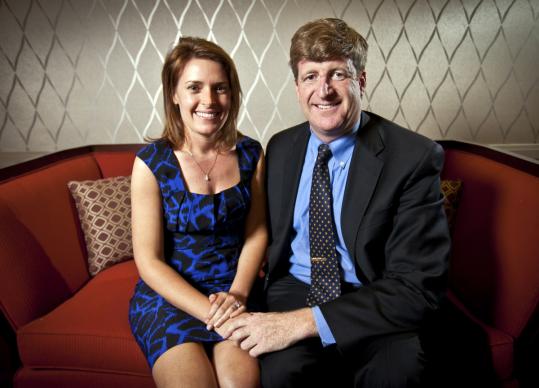 Patrick Kennedy walks, beaming, into the John F. Kennedy Library for a gala luncheon. At his side is his fiancee, Amy Petitgout. In his arms is her 3-year-old daughter, Harper. On his mind is another new passion of his: the brain.

On his way to the podium, Kennedy shakes hands, slaps backs, and poses for pictures. When he begins to speak, the crowd gives him a standing ovation.

It’s a big change from the days when Kennedy, who represented Rhode Island in Congress for eight terms, made headlines for various shenanigans, including an early morning crash in 2006 outside the Capitol and subsequent treatment for addiction to prescription medication.

As he prepared to retire from Congress in January, he turned his attention both inward — courting Petitgout — and outward, launching a nonprofit to advance brain research. When his father, the late Senator Edward M. Kennedy, lay dying from a brain tumor in 2009, he told Patrick that he didn’t have to stay in Congress, that he could find other ways to serve the public.

“My father said I could take satisfaction in what I had accomplished with the passage of the Mental Health Parity Act and that there were other ways to serve and make a difference outside of holding public office that may give me more of a personal life as well,’’ says Kennedy.

Using his family name and his extensive list of contacts, Kennedy, 43, has cofounded an initiative with California businessman and philanthropist Garen Staglin, who has raised millions of dollars for brain research since his son was diagnosed with schizophrenia.

“It’s enormously satisfying,’’ Kennedy says during an interview in Boston. “I feel like I’m still giving back even when I’m no longer in Congress.’’

The new organization, One Mind for Research, aims to hasten cures for neurological disorders by bringing together scientists, policy makers, and advocates to improve funding, awareness, and research of the brain. The project, which held a three-day symposium last month, includes a 10-year campaign to raise $500 million a year from private philanthropy and $1 billion in federal funding.

Kennedy, who in Washington labored in the considerable shadow of his father, calls the new effort his life’s work.

“This I believe, if successful, will be the most important thing I’ve ever done,’’ he says. “Right now I feel like I’m doing what I’m meant to do. This is what gets me feeling I’m using my family legacy to its purpose.’’

The Kennedy family tree is filled with political fame and fortune, as well as well-documented personal challenges. “It’s the brain, stupid,’’ is Kennedy’s short way of expressing his long interest in the family DNA. There’s the battle his mother, Joan, had with the bottle, his own struggle with bipolar disorder and substance abuse, and his father’s fatal tumor. Thought to be mildly retarded, Aunt Rosemary was lobotomized as a young woman and spent the rest of her life in an institution. Sargent Shriver, who married Eunice Kennedy, died in January after a long struggle with Alzheimer’s disease.

In Congress, Patrick Kennedy’s signature legislation was the Mental Health Parity Act of 2008, which requires health insurance companies to cover mental disorders as they do physical ailments. He calls it a civil rights battle, much like those fought by his uncles against racial discrimination in the 1960s. But he knows the societal stigma around mental illness remains.

“The American Medical Association categorized alcoholism as a medical disease in the ’50s, and people still don’t treat it as a physical malady but as a personal failure.’’ No one questions his lifelong struggle with asthma, he says, but his struggle with addiction has long been public fodder.

At 21, after graduating from Providence College, Kennedy was elected to the Rhode Island House of Representatives, where he served two terms before being elected to Congress. In Washington, he attracted attention as much for his personal problems — which included pushing a security guard at Los Angeles International Airport and trashing and abandoning a rental boat off Martha’s Vineyard — as for his legislative work.

After he crashed his convertible into a Capitol barrier in 2006, he publicly disclosed the extent of his depression, longtime drinking, and addiction to painkillers, and went into treatment at the Mayo Clinic in Minnesota, where he had gone on earlier occasions. He entered treatment again in 2009 and has said addiction is a “lifelong battle.’’

Now, a newly confident Kennedy says it took leaving Washington to find the time and space he needed to get his life in order. The public eye wasn’t particularly kind to him, nor was it conducive to sobriety.

The most important change, he says, has been taking the time to develop a relationship. He and Petitgout will be married July 15 at his father’s house in Hyannis Port. Vicki Reggie Kennedy, the senator’s widow, is throwing them an engagement party. Patrick’s brother, Ted Jr., a lawyer who lives in Connecticut, will be the best man, and Supreme Court Justice Stephen Breyer, once a top aide to the senator, will officiate.

“He seems great. He seems very relaxed, more rested, and healthier,’’ says Adam Brand, who was Kennedy’s chief of staff for four years. Brand says Kennedy’s office was known for being hard-driven and fast-paced. Though he misses him on Capitol Hill, Brand thinks his former boss was right to retire. “He obviously made the right decision for himself. I can’t imagine him trying to get married to Amy if he were still here, dedicating the time to establish a relationship.’’

Kennedy and Petitgout met last spring at a fund-raiser in New Jersey held by the Association for Retarded Citizens, where Kennedy was the guest speaker. Both believe it was fate. Her father, who taught special education for years, had a ticket but couldn’t go at the last minute. Amy went instead. The longtime bachelor and the divorced school teacher hit it off.

They dated quietly for a year, and in March he got down on one knee and asked her to marry him, after first asking her parents. Petitgout said yes immediately. Her large diamond — she says she doesn’t know exactly how large — is framed on both sides by pink sapphires.

“They are soul mates if I’ve ever seen it,’’ says James Ramstad, a retired congressman from Minnesota who is Kennedy’s sponsor in Alcoholics Anonymous. “It’s the happiest and most fulfilled I’ve seen Patrick.’’

Ramstad, who worked on mental health parity with Kennedy, says he’s proud of him for becoming a public face “of addiction and recovery in America.’’ He plans to travel with him around the country to educate Americans about One Mind for Research and the importance of neuroscience. The past several times they’ve been together, Ramstad says, it’s been obvious that Kennedy is doing well in recovery.

“He looks good and healthy — he’s jogging again, and he doesn’t done that in quite a while,’’ Ramstad says. “He’s taking care of himself, and I know Amy has a lot to do with that.’’

Petitgout says of their regular jogs: “He leaves me in the dust.’’ He smiles and calls her “wicked smaht,’’ pronounced with the broad “a’’ made famous by JFK.

The couple and Harper have been living with Petitgout’s parents in Absecon, N.J., where she teaches. But they plan to move into the house they bought near Atlantic City. A sixth-grade teacher, Petitgout, 32, will also help with One Mind for Research, advising staffers on early intervention with children who have brain-related conditions such as autism.

They also want Harper to have siblings. “We’re looking forward to that!’’ she says.

Patrick, the youngest of Ted and Joan Kennedy’s three children, was very close to his father. Last August, on the first anniversary of the senator’s death, he called Dr. Allan Friedman, chief of neurosurgery at Duke University Medical Center, who had performed brain surgery on Ted. Without the surgery, he believes, his father would have died much sooner. He thanked Friedman for giving him “the most important year of my life with my father.’’

It’s people like Friedman and his counterparts at other hospitals and laboratories and government agencies that Kennedy hopes to bring together, instead of each place having its own “silo’’ of money and research. He believes it’s timely, with thousands of veterans of Iraq and Afghanistan returning home with traumatic brain injury or post-traumatic stress disorder.

“Want to hear my light bulb moment?’’ Kennedy asks, then proceeds to tell how, during a board meeting of the John F. Kennedy Center for the Performing Arts in Washington, the director talked about tying the season’s programs to the 50th anniversary of President Kennedy’s call to put a man on the moon. “The New Frontier,’’ the president named it.

“I got on the horn with my cousin Caroline and said, ‘Do you think we could, at the JFK Library, rebrand the new frontier as a brain research program?’ She said it was a great idea.’’ Kennedy recently capped off a three-day conference of One Mind for Research with a lunch at the library for heavy-hitters in the political and medical fields.

Speakers, including Vice President Joe Biden and astronaut Buzz Aldrin, the second man to walk on the moon, called for the space program to serve as a blueprint for the next frontier: exploring the human brain. The idea is to bring scientists, each of whom normally works on a specific brain disorder, together so they might share findings and see where there is overlap in both research and funding.

At a table near the podium, Steve Winter sat in a wheelchair. He was there for Patrick and for the cause, he said. At age 14, the high school athlete was paralyzed from the waist down when his mentally ill mother shot him and his sister, who also survived. In recent years Winter has traveled with Kennedy to testify about mental health issues.

“When you tell Patrick Kennedy something is bad, he stands up and turns red,’’ says Winter, 49, who lives in Arizona. “He’s intense, passionate, and he just keeps pounding away. He knows the pain of mental illness in his own family.’’

Kennedy says the past months have been productive and happy.

“I can’t answer how the stars aligned,’’ he says, smiling at Petitgout, “but they have.’’