THIS STORY HAS BEEN FORMATTED FOR EASY PRINTING
Mansfield 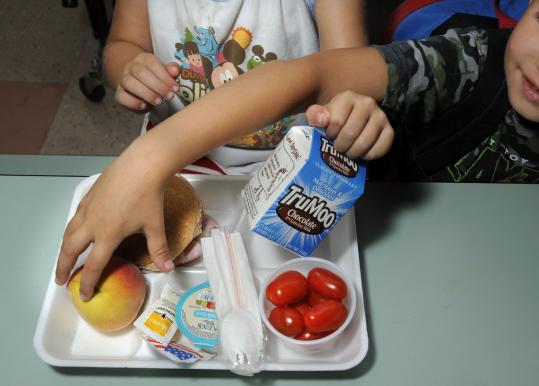 At a time when child obesity is in the spotlight and food allergies have spiked, Mansfield has approved a policy preventing children from bringing food from home for birthdays and parties. (Mark Wilson for The Boston Globe/File 2010)
By Michele Morgan Bolton Globe Correspondent / June 5, 2011

Mansfield schools have approved a no-food policy for classroom celebrations because of a rising number of children with food allergies and other illnesses, ending a longstanding tradition of parents and others sending in birthday cupcakes and other treats.

In fact, the rule passed by the School Committee recently in a 4-1 vote limits any food-related celebrations to two a year, urging school officials and parents to work out other, more creative ways to make special days stand out. The policy becomes effective when the new school year starts in September.

The ban is being hailed by some parents as a timely move, but is derided by School Committee member Jean Miller, who cast the lone vote against it, as the district taking one more step to becoming an overregulated “nanny state.’’

Mansfield joins a number of other school districts south of Boston that have, or are instituting, similar initiatives, as the state’s School Nutrition Bill, drafted by the Department of Public Health, kicks in on July 1. The legislation bans high-calorie, high-salt foods and sugary drinks in school cafeterias and vending machines and gives districts a year to comply.

Nationally, some people aren’t taking such edicts sitting down. The Texas Legislature, for example, passed a “Safe Cupcake Amendment’’ in 2005 after parents lobbied to have the exception added to that state’s wellness policy so that they would not lose their right to bring any kind of cupcake to their child’s classroom.

Nothing so extreme has surfaced here.

Janice King, president of the state’s School Nutrition Association, said the movement away from celebratory foods is a positive step that is taking hold in Massachusetts.

“Socially, and as a culture, we seem not to be able to get together without eating and drinking,’’ she said. “Is the world going to cave in if we don’t have a cupcake? A treat for some children is to have a slice of watermelon.’’

Changes are successful in small, incremental stages, King said. “We hope to find the middle ground.’’

Well ahead of the curve, Duxbury’s Chandler Elementary School banned birthday cupcakes in 2004, urging other ways to celebrate a special day, such as encouraging teachers to place a special birthday chair cover on the back of the student’s chair, or allowing young children to wear a birthday sash or crown.

More recently, schools in Hull and Weymouth have voluntarily imposed the cupcake crackdown, as have those in Brockton, where, for example, Hancock Elementary principal Marcia Andrade Serpa regularly refers parents of the school’s 720 kindergarten to Grade 5 students to the school’s policy on food, which very politely “refuses’’ cupcakes and other sweets.

That helps ward off incidents ranging from minor allergic reactions to anaphylactic shock, she said. Last year, a child with a citrus allergy had a serious reaction to an orange-scented magic marker, she said, and broke out in hives.

Now, parents are encouraged to be creative by bringing special pencils or erasers, as long as the treat isn’t food, she said.

In Mansfield, School Committee chairman Michael Trowbridge said the no-food policy, which resulted from the work of a district health advisory committee, has been under consideration for a few years.

While childhood obesity is a serious issue, the policy’s focus is overall wellness at a time when serious food allergies have skyrocketed, he said.

“It may be rare, but people do die,’’ Trowbridge said.

About 90 percent of all allergic reactions to food result from consuming eggs, peanuts, tree nuts, fish, wheat, soybeans, milk, and shellfish, according to the Centers for Disease Control and Prevention. An estimated 3.9 percent of children under age 18 and 2 percent of adults have food allergies.

Combined, food allergies cause 30,000 cases of anaphylaxis, 2,000 hospitalizations, and 150 deaths annually, according to the CDC data.

In 2007, the reported food allergy rate among all children younger than 18 was 18 percent higher than in 1997. During the 10-year period from 1997 to 2006, according to the CDC, food allergy rates increased significantly among both preschool-aged and older children.

Scientists have loosely attributed such jumps to reasons ranging from the environment to additives in foods.

Trowbridge said Mansfield officials are taking every step they can to keep school safe. Students swipe ID cards in the cafeteria that pop up their pictures and a list of any food concerns. But there is no such safety net with foods somebody else brings from home, he said.

In a letter to parents, officials said the school environment should model a healthy lifestyle from the cafeteria to the classroom.

“Children should be given the opportunity to learn healthy eating practices during young ages,’’ it said.

But if that’s the case, said Miller, what about Mansfield’s school lunch menus? In an interview, Miller read off a list of the cafeteria’s offerings for the week, from pizza bagels and macaroni and cheese to popcorn chicken with mashed potatoes and gravy.

“It’s unbelievable for the district to say cupcakes have become a risk and then serve fried, fatty foods,’’ said Miller, whose son is allergic to nuts. “I would like a more measured, reasonable approach with some common sense.’’

Mistakes happen even with safeguards in place, she said, describing an incident in which her child was served a granola bar in his school cafeteria that made him ill.

A number of parents contacted Miller with positive feedback about her vote, she said. But Roseanne Smargon, the mother of a Mansfield fifth-grader, wasn’t one of them.

“This totally needed to be done, and I wholeheartedly agree with it,’’ said Smargon, who said her friends with diabetic children agree.

Never mind the fact that some families can’t afford to bring in cupcakes to feed a whole class, but feel they must to save face with those who can, she said. “I have always felt it was ridiculous.’’

Bolton can be reached at michelebolton@live.com.