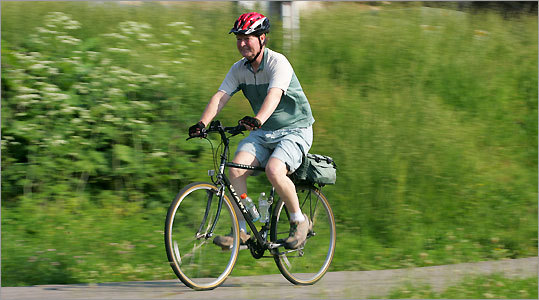 Bill Schuette was diagnosed with advanced lung cancer four years ago. But this summer, Schuette, 62, is planning a 180-mile bike trip — a high point in an unexpected recovery brought about by an experimental drug. Above, Schuette rode his bike in Ohio on May 31. (Skip Peterson for The Boston Globe via Associated Press)
By Carolyn Y. Johnson Globe Staff / June 3, 2011

After Bill Schuette was diagnosed with advanced lung cancer four years ago, he tried seven kinds of chemotherapy. But in early 2009, his doctor told him he would not make it to Christmas.

“Bill,’’ Schuette recalled the doctor saying with tears in his eyes, “we don’t have anything else.’’

But this summer, Schuette, 62, is planning a 180-mile bike trip — a high point in an unexpected recovery brought about by an experimental drug he happened to hear about on TV news.

That medication, crizotinib, has become one of the most talked-about treatments in the cancer world because of its promising results, including data being presented this weekend in Chicago at the nation’s largest meeting of cancer specialists. As impressive is how rapidly the drug was developed by , and cancer specialists say it shows the merits of a new approach to designing and testing cancer drugs.

So-called targeted cancer drugs, which are designed to disarm the specific genetic aberrations that drive a tumor, have been approved for a handful of cancers in the past decade, but increasingly, researchers are testing these drugs only in patients whose tumors carry the particular Achilles’ heel they are aimed at — with the hope that clinical trials will be quicker and cheaper because they need to enroll fewer patients.

For patients, the long-term benefit will be drugs that will likely become available faster and work better. The trade-off is that such treatments will work in smaller subsets of patients.

With the development of crizotinib and another targeted therapy, the experimental melanoma drug vemurafenib, scientists, clinicians, and drug companies say that cancer research and treatment has rounded a corner in which targeting has become integral to every part of the process from the initial drug development and testing, to the decision to give a drug.

“I think this is a one-way ticket to how to think about the treatment of cancer patients, ’’ said Dr. Todd Golub, a founding member of the Broad Institute, a Cambridge genetics research center. “There’s been a major US and international effort put in motion to identify the genetic basis of all human cancers, and the big pharma and biotech companies have done a very significant reorientation of their discovery efforts to align with this way of thinking.’’

Julian Adams, president of research and development at , a biotech company based in Cambridge, said that he has mandated that all future trials of cancer drugs include an analysis of biological markers, to ensure that the company is designing nimble and flexible clinical trials that will ensure the drug is tested on the right patient population.

“The key, I think, to the future of cancer drug development is to try to identify which patients are likely to respond and to do so in’’ early-stage clinical trials, Adams said, adding that this will “obviate the need for thousand-patient studies,’’ which are expensive and can take years to do.

But even these new targeted drugs bring with them a stark reminder of the limitations of science in fighting cancer. For all the excitement over crizotinib, it targets only a tiny slice of one type of cancer — 3 to 5 percent of patients with non-small cell lung cancer, or about 6,000 to 10,000 people annually in the United States. Each type of cancer carries a range of genetic abnormalities, and scientists do not always know which ones are the drivers, much less how to target them effectively. And even though many patients respond to crizotinib, the cancer eventually develops resistance to the therapy — as seen with other targeted drugs.

Dr. John Iafrate, director of molecular diagnostics at Mass. General, likens the situation to the early days of HIV therapy and believes cancer will follow suit.

“We’re like where we were when AZT was [developed] . . . realizing that all those patients are still going to die, but this is better than what we had,’’ he said. “Now people are living with the disease for a long time.’’

At the American Society of Clinical Oncology’s annual meeting, which starts today, Dr. Alice Shaw, a thoracic oncologist who is leading the crizotinib trial at Mass. General, will present data showing that among 82 patients with a rearranged gene called ALK, 77 percent were alive after one year on the drug, and 64 percent were still alive after two.

When the researchers compared a subset of these patients to an earlier group with the same ALK gene who did not get the drug, their survival rate after two years was more than six time times greater.

The speed of crizotinib’s development is remarkable, say scientists, though the process was helped by the fact that an experimental drug that was active against ALK already existed when the gene’s role in causing cancer was discovered by Japanese scientists just four years ago. That was the same year Schuette was diagnosed with lung cancer. The drug is receiving an accelerated review from the Food and Drug Administration, and Pfizer executives hope it will be approved this year.

“What’s distinctive about these stories is the rapidity,’’ Tyler Jacks, director of the Koch Institute for Integrative Cancer Research at MIT, said of the new approach to developing targeted therapies. “The turnaround time from science discovery to clinical testing to drug approval is going to be short.’’

Schuette, a former high school principal, knows that he is lucky, but he also knows that the cancer could return. He does not let bad weather deter him from his daily bike rides, and he cherishes his vacations — and even the 870-mile drive he and his wife make from their home in Versailles, Ohio, to Boston, to get his crizotinib medication every two months at Mass. General.

“Never in two years, or before that, was the word ‘cure’ ever used,’’ Schuette said. “But to be able to stabilize the disease and actually see it regress . . . to be able to again approach life with everything I had in the past, is more than anyone could ask for.’’