Dale Hoyt sees his cardiologist every six weeks at Massachusetts General Hospital, but he’s never out of touch for long. Every day, he checks his blood pressure, heart rate, and weight and logs them on his iPhone, and periodically he e-mails the data to Dr. Kimberly Parks.

Hoyt, 60, of Berlin, Conn., has congestive heart failure and coronary artery disease. He’s on the heart transplant list, and while he waits, he needs to track his vital signs and symptoms meticulously. But until he met Parks, in 2009, he wasn’t doing it.

Then Parks introduced him to HeartWise.

“She said, ‘Monitor your heart rate, monitor your weight, and oh, by the way, here’s a neat little app,’ ’’ Hoyt recalled. It cost just 99 cents and lets him track all his data, analyze trends, create spreadsheets, and share them with Parks. He uses it religiously.

“This makes it easy,’’ he said, quickly pulling up a chart and scrolling through weeks of data. Without the app, he said, he would still take his blood pressure — but keep and share a log? “I probably wouldn’t do that.’’

Patient engagement, doctors say, is a crucial factor in health outcomes. Office visits are brief; once you step out into the real world, it’s up to you to take your medicine, exercise, diet, and monitor your symptoms.

It can be hard, tedious work, and many doctors’ orders go unheeded, even in such basic matters as patients filling prescriptions. A recent study of more than 75,000 patients by researchers at Brigham and Women’s Hospital and Mass. General found that 22 percent of prescriptions were never filled over the period of a year. Noncompliance rose to 28 percent on orders for first-time prescriptions, according to the study, published last year in the Journal of General Internal Medicine.

Use of mobile applications, many medical professionals believe, could make an important difference. Multiple small-scale studies have looked at apps and their impact on patient education, engagement, and compliance, with mostly positive, though not conclusive, findings. Researchers at the University of Washington provided eight diabetic patients with services such as feedback on glucose levels and connection to care providers through cellphones and game systems. The study, published last month in the journal Diabetes Technology & Therapeutics, found patients liked using the system and felt more aware of their health needs as a result.

In Toronto, a study of more than 100 heart-failure patients reported that many were comfortable using mobile apps to manage their conditions — though some clinicians had reservations about difficulty of use by some patients, legal issues, and increases in clinical workloads. (The research was published last year in the Journal of Medical Internet Research.)

And because even people in some of the world’s poorest, least-developed areas often have cellphones, studies are looking at mobile tools to support HIV care, health education, and more. On May 3, Secretary of State Hillary Clinton announced an international campaign to deliver free health information and tips to pregnant women and mothers on cellphones.

In the United States, 36 percent of cellphone users have smartphones, according to the Nielsen Company, and the numbers are rising fast. Smartphones — which have operating systems like computers, can run applications, and can connect to the Internet — are far more than communications devices. The average iPhone user, Nielsen reports, has 48 apps installed, while the average Android phone has 35.

There are countless application options, with free or low-cost apps for everything from diet-tracking to yoga to medical guides and chronic condition managers. But the potential, doctors and software developers say, is much greater.

Imagine an app that connects directly to your blood-pressure monitor, scale, or glucometer, and not only shows you how you are doing, but also offers expert advice and alerts your doctor at the first sign of trouble, so he or she can adjust your medication.

More than 1,000 consumers already use such apps from Boston-based Healthrageous, as well as applications that manage weight loss, diabetes, and hypertension, the company reports.

“We’re trying to leverage technology to help you understand your body and to turn that into something really actionable that improves your wellness,’’ he said.

Dr. John Moore, a researcher at the MIT Media Lab, is building a system named “CollaboRhythm.’’ His apps — so far he’s focused on HIV, hypertension, and diabetes — redefine the doctor-patient relationship, casting it as “person and health coach,’’ with constant interaction.

The system includes visual tools that show how medications work, for example, and what happens when you miss a pill. It offers multiple ways for patients to analyze their data and involves regular communication with the doctor, by text, voice, or video.

“It’s using technology to deliver health care right to you when you need it, where you need it,’’ Moore said.

The increasing use of apps to engage patients in mainstream medicine is driven both by the smartphone boom and the expanded use of electronic medical records, or EMRs, far beyond simply as replacements for paper charts.

Last month, Southcoast Hospitals Group, headquartered in New Bedford, launched an app to help patients keep track of their medications, find a physician, and get health care news. More than 1,000 people have downloaded it so far, said Jim Rattray, vice president of marketing and public affairs.

“This is a great way for people to get comfortable with technology in managing their own health care,’’ Rattray said.

Connecting the app to Southcoast’s EMRs, Rattray acknowledged, will take “a few years,’’ and in general, linking doctors to their patients’ apps remains a major challenge. At Mass. General, Parks has to print out her patients’ reports from HeartWise to put it in their charts, and she cannot e-mail them back through the system.

Dr. Patricia Hopkins, a Quincy internist and rheumatologist who is working on technology and patient engagement initiatives on behalf of the Massachusetts Medical Society, said many key questions remain, from how apps and EMRs may be linked, to how doctors will be compensated for the extra work involved in these extended patient interactions.

The success of these new technologies, Hopkins said, hinges on answering those questions. “Right now there are as many apps being built as there are apps dying,’’ she said.

EMR developers are coming up with their own answers, building apps and adding patient portals to their systems. Westborough-based eClinicalWorks, used by more than 50,000 providers, allows doctors to text-message, call, or e-mail their patients through its portal. Now, eClinicalWorks is building mobile apps for asthma, diabetes, and other conditions, to be unveiled in October, said CEO Girish Kumar Navani.

“You cannot control patients’ chronic conditions by only seeing them in the office,’’ he said. So the company is working with doctors to build disease-specific apps, making sure they track the right data — say, blood sugar levels for diabetics — and can feed into EMRs.

Parks, who has 20 to 30 patients on HeartWise — a fraction of her practice — said that she sees huge potential in the coming years and that many of her colleagues are also “very interested in this technology.’’ In the meantime, she figures even limited-feature apps can help.

“Often patients come in, and they sort of expect some magic cure,’’ she said. “The truth is, most chronic illness requires participation. I think this puts responsibility on the patients, and it improves the quality of their care.’’

Marion Davis can be reached at msdavis@live.com. 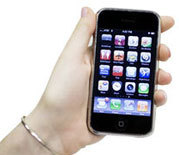 See which apps were favorites among Boston.com readers.

A sampling of apps
New health- and fitness-related apps are showing up on the market seemingly every day. Below are some of the most popular and highly rated by users.

Med Helper: Track all your medications in detail, set daily reminder alarms, track your inventory and get refill reminders. Android / free or $4.14 for no ads

RxmindMe: Track your medications in detail, set daily reminder alarms, attach pictures of each type of pill, look up drugs on the FDA database. iPhone / free

Calorie Counter (FatSecret): Find nutritional information for food at the grocery store, at restaurant chains, and more; keep track of your meals, exercise, and weight. iPhone, Android, and BlackBerry / free

The world of women's hormones

Research once suggested that hormone replacement medication could be harmful for women. Now, a new study says it may be beneficial for some patients.