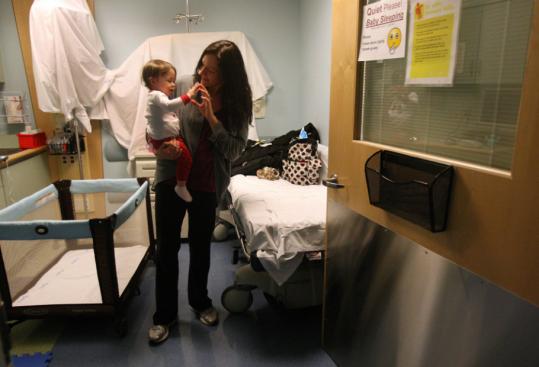 Nicole Porter tried to coax her daughter, Ava, to sleep in order to have an MRI as part of a study at Children’s Hospital’s Waltham clinic. (Suzanne Kreiter/ Globe Staff)
By Carolyn Y. Johnson Globe Staff / May 16, 2011

WALTHAM — Lights dimmed, a hush fell over the hallway as Nicole Porter, cradling Ava in her arms, walked gingerly toward the powerful imaging equipment that would allow researchers to peer into her baby’s developing brain.

Porter had spent hours coaxing Ava to sleep so she would lie still in the noisy scanner. Then, at the last minute, Ava’s eyes fluttered open and she gazed at the colorful ceiling. The experiment would have to start over.

It was another frustrating moment in the difficult process of studying the brain during early development.

Nothing was wrong with Ava; the 11-month-old from Boston was part of a study that uses brain imaging to see if early hallmarks of dyslexia can be seen years before children have trouble reading. Scientists believe that if they can identify nascent disorders such as dyslexia or autism earlier, and get a jump on therapy, they might eventually be able to prevent children from developing problems later.

“We know many important pediatric disorders start to emerge early on, and some things, for example dyslexia, you might not pick up until they’re reading. But you know their brain has probably started to diverge from normal in some way early on,’’ said Dr. P. Ellen Grant of Children’s Hospital Boston, who is leading the study with Nadine Gaab, an assistant professor of pediatrics at Children’s. The research is being done at the hospital’s Waltham clinic.

Scientists have previously experimented with behavioral tests to try to identify learning disabilities or even mental health problems well before a person meets the criteria for a disease, but now they are beginning to turn to sophisticated imaging techniques.

For example, a pilot study, published earlier this year in the journal BMC Medicine and led by other researchers at Children’s Hospital, used a technique that measures electrical activity in the brain to study 9-month-old infants that were at risk of autism. In other studies, researchers are imaging the brains of babies born prematurely, who are more prone to learning disabilities and other cognitive problems, and the brains of children with Tourette syndrome.

In those disorders, as with dyslexia, researchers hope to learn when problems develop, what goes awry in the brain, how treatments affect the brain, and whether problems can be detected and even fixed before symptoms appear.

“The overall question is, Are you born with it or does it develop within the first couple years, months of life?’’ Gaab said. And can new types of scans “be used as a diagnostic tool one day.’’

Much of what is known about dyslexia and the brain comes from research in adults that began in the late 1970s. Dr. Albert Galaburda of Beth Israel Deaconess Medical Center and colleagues examined the brains of deceased people who had dyslexia and found anomalies, including cells where they didn’t belong — clusters of neurons called ectopias that appeared to have migrated to the outer shell of the brain.

Glenn Rosen, an associate professor of neurology at Beth Israel Deaconess, found that by genetically manipulating rats, it was possible to create animals with the same odd collections of misplaced neurons. Behavioral testing by collaborators at the University of Connecticut found that those rats performed poorly on a test of rapid processing of auditory information. In people with dyslexia, the ability to distinguish between two tones played in quick succession diminishes as the gap between the tones shrinks; the rats with the brain abnormalities had the same problem.

But the question remained: Do such irregularities exist in most people with dyslexia, and when do they develop? Are there other changes in brain wiring and structure that are present from the start, or do the differences develop as people struggle to learn to read?

In a paper published last year in the journal NeuroImage, Gaab found that in a group of 20 young children who had not yet learned to read, there were differences in the size of specific brain areas, known to be involved in reading, between children with a family history of dyslexia and those who had no such history. That suggested that brain changes are already there before children begin to read.

That led Gaab to wonder whether it would be possible to discern abnormalities in the brain even earlier. She teamed up with Grant to try to answer that question. They needed better imaging techniques — and the ability to study the brains of healthy babies without sedating them.

On the technology side, the researchers are working to develop new scanner hardware and software that are tailored to babies’ smaller heads, to improve the speed of imaging and refine the data collected in the MRI scanner. Grant, director of the Fetal-Neonatal Neuroimaging and Developmental Science Center at Children’s, said that babies’ brains are different from adult brains, and traditional techniques are not good at picking out the features of the developing brain.

But ultimately, it all depends on getting the babies to remain asleep in the noisy, confusing scanner. The researchers are testing various strategies, from asking parents to play CDs for their babies of the pulsing noises they will hear, to booking the scanners around the nap time of infants. In the current study, researchers are scanning 40 babies under a year old, half with a family history of dyslexia, and half without.

Porter, a physical therapist, said that although the research protocol — nap time in an unfamiliar environment — isn’t the easiest, she plans to give it another shot.

“My husband and his sister both had learning disabilities. We’re not sure if it was dyslexia or not,’’ Porter said. “The more you can figure out, the better.’’

The world of women's hormones

Research once suggested that hormone replacement medication could be harmful for women. Now, a new study says it may be beneficial for some patients.