On the long, hard road to a breakthrough 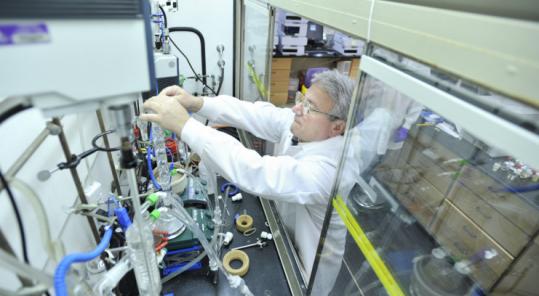 CAMBRIDGE — Fifteen years ago, Joshua Boger received a call from a team of scientists one floor down at who were searching for the key to hepatitis C, a liver-destroying virus that affects millions of people.

Come to the lab, they said, we might have done it.

Boger joined the small crowd gathered around a computer screen, anxious to get the first glimpse of their prey: an enzyme that the virus needs to attack the body.

The discovery was a coup for Boger’s seven-year-old biotechnology start-up. Vertex had beaten major drug makers with greater resources in the race to decipher the enzyme’s structure. But the researchers’ elation was short-lived. They quickly realized it would take a mighty effort to beat this virus.

And indeed it did.

After more than two decades in existence and $4 billion spent on research and development — including work on other experimental therapies and disease treatments — Vertex is finally on the verge of producing its first major drug. On Thursday, a Food and Drug Administration advisory committee is scheduled to consider whether the company’s hepatitis C pill, telaprevir, is ready for doctors to prescribe to patients. If the recommendation is favorable — as expected — and FDA officials approve the drug next month, telaprevir could become a blockbuster treatment, by some estimates quickly reaching annual sales of more than $2 billion a year.

The drug’s long roller coaster ride illustrates how complicated it is to turn a lab-built molecule into something that can cure patients. The process requires unwavering confidence, huge risks, a roster of brilliant scientists, and piles of money. Oh, and luck, too.

“The easiest thing you can do in this industry is say something is going to fail, because 95 to 99 percent of the time you’re right,’’ said Roger Tung, a founding scientist at Vertex who is now chief executive of Concert Pharmaceuticals Inc. in Lexington. “The trick is how to get to those very rare successes.’’

In 1996, the Vertex researchers who uncovered the structure of the critical enzyme hoped to find a place on it where they could easily plug in a drug molecule that would disable it — and thus stop the virus. Instead, they found the molecular equivalent of a sheer rock face, without so much as a decent toehold.

“This is going to be a really hard problem,’’ Boger recalled them saying.

The virus, which spreads through contact with infected blood, is silent and slow. Over years it damages the liver, eventually causing organ failure or cancer. When Vertex first began working on a treatment in 1993, the only established therapy had long-term success in about a quarter of patients. It also produced miserable, flu-like side effects and had to be taken for six months or longer.

But Vertex scientists had reason to be optimistic because of lessons that were being learned from a battle against the AIDS virus, HIV. Some new HIV drugs inhibited an enzyme called a protease. The hepatitis C virus was different from HIV in many ways, but researchers thought it might be similarly vulnerable.

“We were hot on the heels of learning all the things that came from the HIV protease drugs revolution,’’ said John Thomson, a biochemist who in 1989 was the company’s third employee. Still, he said, “we were a lot more in the dark than you would assume in terms of which way to go.’’

Because there were so little data available, Vertex had to tackle basic research questions before its scientists could begin to develop a drug. partnered with Vertex in 1997, providing critical funding and other support. The scientists had to create in-house many of the lab tests they needed to evaluate whether a drug to treat hepatitis C was likely to be effective. It was a bold strategy and Vertex became known as a place for aggressive thinking.

Ann Kwong, brought in from a competing company in 1997 to build a virus-fighting team, said joining Vertex was like “walking into a dragon’s den.’’

In 2001, Vertex emerged with the potential hepatitis C treatment, dubbed VX-950 at the time. But there were still plenty of bumps between that breakthrough and marketable drug. The partnership with Lilly ended two years later, cutting off a key source of funding and expertise. At about the same time, a competitor, Boehringer Ingelheim, presented early test results for a hepatitis C drug that showed an approach similar to Vertex’s could work. But the Boehringer Ingelheim study also suggested its treatment was more potent than the Cambridge company’s. As a result, people began to lose interest and Vertex began to shift focus, according to Kwong.

There was also more bad news for the Vertex hepatitis C scientists — a downturn in the US economy forced the company to lay off some of its researchers.

But Kwong kept chasing the virus and the treatment on the side, calling it a “midnight project.’’ One laid-off employee from Kwong’s team worked alongside her, without pay, to complete a crucial experiment.

The results provided evidence that Vertex’s drug could work just as well as Boehringer Ingelheim’s, fueling renewed enthusiasm about pushing the treatment into clinical trials. Initial results were positive. A swooping curve now called the “Vertex swoosh’’ showed that levels of the virus plummeted in patients.

Patients and doctors began to pay close attention. Based on the drug’s potential and the need for new therapies, Vertex was granted an expedited review process by the FDA in 2005. The last-ditch research efforts of Kwong and others had made a difference. Boger made the rounds of investment conferences to trumpet the test findings.

The company began to grow and eventually reshape itself, hiring salespeople in anticipation of having something to promote.

Last year, Vertex presented its most striking clinical trial results. Telaprevir, in combination with two drugs already used to treat the disease, cured 75 percent of patients with the most common form of the virus who had not previously been treated, compared with less than half of those whose treatment did not include telaprevir. The majority of patients were also able to shorten their treatment time by half, to six months.

But for all its benefits, telaprevir presents some complications. Patients taking it can suffer from a rash, and it has to be used in combination with the current treatment, a regimen that can cause flu-like symptoms. Other therapies that are in various stages of clinical development are being closely watched by industry analysts.

This week’s FDA advisory committee vote will come a day after the panel reviews boceprevir, a & Co. drug for hepatitis C. It’s possible both products will win favorable decisions, setting off competition between the two companies to gain an edge by being first to the market.

For the Vertex employees who have dedicated much of their professional lives to refining the compound, it will be a career pinnacle. One of them, Kyle Kelley, has spent 13 years managing many of the project’s logistics. He plans to be on hand when the first box of the drug is loaded on to a truck.

“I’ve been working on this project longer than my kids have been born,’’ Kelley said.

How to run safely -- whether you're a pro or beginner.