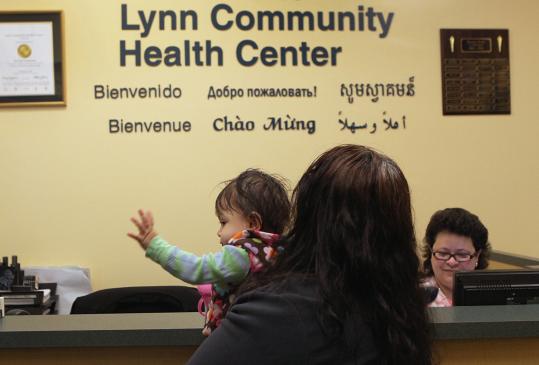 WASHINGTON — Construction workers have transformed the parking lot alongside the Lynn Community Health Center into a sleek, three-story annex that will double the center’s capacity to provide checkups, dental work, and therapy for the city’s poorest residents.

Yet even as bricklayers and electricians prepare the building for its August opening, a funding battle in Congress threatens to choke off the new services before the doors have opened. Republicans want to cut more than a billion dollars bound for such clinics, a move that would force centers across the country to cut back many services. Dozens of new centers could be forced to close, advocates said.

Community health centers, pioneered by Boston almost a half century ago, are a cornerstone of efforts to expand health care coverage to all Americans while cutting costs. By offering preventive care to poor, uninsured residents, these neighborhood centers reduce the chances these patients will end up in hospital emergency rooms for vastly more expensive treatment, with taxpayers picking up the bill, health analysts say.

“Why would you want to give someone access to more expensive care if you could take care of it in a less expensive way? It makes absolutely, positively no sense on any level,’’ Representative Michael E. Capuano, a Somerville Democrat, said of the GOP efforts. Capuano was a founder of the Congressional Caucus on Community Health Centers.

Republicans characterize their proposed cuts as a necessary piece of their overall effort to rein in government spending. Their approach would also cripple President Obama’s health care overhaul.

Steve King, an Iowa Republican who has been a leader in GOP efforts to repeal the health care law, said Republicans are taking a principled stand against what they believe is an unconstitutional and unsustainable federal law. If funding for health centers ends up being sliced, Republicans could revisit the issue after health care repeal, he said.

“I have been very supportive of community health centers; I’ve got some very good ones in my district,’’ he said. “But everybody has to share the pain.’’

Such centers have long been central to health care for the poor. The Columbia Point Health Center in Dorchester — now the Geiger-Gibson Community Health Center — was the nation’s first nonprofit center, transforming how poor Americans received such basic preventive medicine as prenatal care and blood pressure screenings.

Today, 52 community health centers in Massachusetts, which run multiple sites serving some 800,000 patients, and 1,250 nationwide centers with more than 8,000 sites are considered the front line in the battle to bring affordable care to regions with little primary care, whether in far-flung rural areas or poor urban neighborhoods. In Massachusetts, 38 of the centers receive direct federal funding.

These centers have historically enjoyed bipartisan support — President George W. Bush pledged to double their capacity and largely succeeded with support from both parties in Congress.

But despite that broad support, the centers have become ensnared in the venomous politics over the health care law Congress passed last year. The Obama administration poured about $2 billion into health center expansions through the 2009 stimulus bill, with over $100 million going to Massachusetts, according to the Massachusetts League of Community Health Centers.

The health care overhaul, called the Affordable Care Act, added an additional $11 billion over five years, with most of that going toward expansions and new centers. The goal: another doubling of the patients served, to 40 million by 2015.

The midterm elections broke that momentum, however. Many GOP freshmen were elected on promises of overturning the law, and so the budget bill that came out of the House last month sought to strip $1.3 billion from funding of health centers.

“Cuts to the level that were in the House budget resolution would be devastating to the whole equation of providing access to primary care across the nation and in Massachusetts,’’ said James W. Hunt Jr., president of the Massachusetts League of Community Health Centers.

Lumping the centers along with other programs deemed wasteful and unnecessary strikes some health center supporters as cruelly ironic: After pouring hundreds of millions of dollars into a program that both parties agreed was needed and effective, Congress could end up with 127 new advanced-level facilities with little funds to operate them. Some new centers could be forced to close.

Lori Abrams Berry, executive director of the Lynn health center, said she is disappointed that bipartisan support has crumbled. “If we really are concerned about cutting costs in health care, then it seems like adding capacity in community health centers would be a positive step,’’ she said.

Though the Senate rejected the House bill and its $1.3 billion in health center cuts earlier this month, few believe that centers will escape cuts as part of an eventual compromise to keep the government running.

“It’s going to really, really strain health centers’ capacity,’’ he said. “If you did just split the difference [between the House and Senate], you’re probably looking at about 5 [million] to 6 million people that we would not have the capacity to serve.’’

An increase of visits to health centers under the federal health care overhaul would save $181 billion or more between 2010 and 2019, according to a study last year from the George Washington University School of Public Health and Health Services. About $52 billion of the savings would come from federal Medicaid funds and $33 billion from state Medicaid funds. “If people can get good primary care, this means that they can become healthier, so they don’t have to go to the hospital for care, so that we can save money,’’ said Leighton Ku, the study’s lead author.

House Republicans are adamant, though, that the health care law must be scuttled, whatever the collateral damage. Michele Bachmann, a Minnesota Republican and a favorite among Tea Party activists, is among House Republicans who insist that Congress must cut money set aside for health care, which she asserts is more than $100 billion in all — a number that Democrats and health care analysts dispute.

Berry has been eagerly watching the addition rise next door. Paid for with stimulus funds, money from the Affordable Care Act, loans and other funding sources, the new building will double the number of dental chairs, add doctors and nurses, and increase mental health and substance abuse services. Almost a third of Lynn’s 90,000 residents received services at the center last year, she said.

Although the building will be completed, she’s not certain what will happen if Congress squeezes off the funds to pay its doctors, nurses, and therapists.

“I have a lot of concerns, because I worry about the people that we serve,’’ she said.