Students moving to be fit 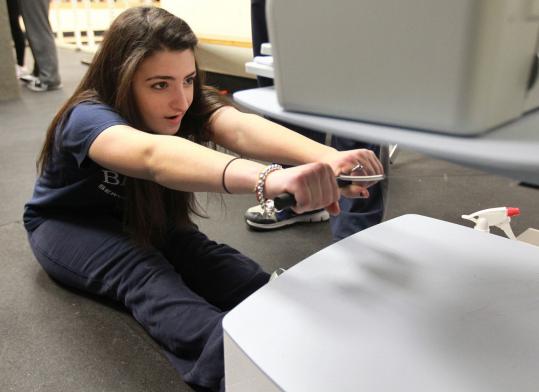 The fourth-graders have tried to tag each other in a relay race, darting back and forth. They have jumped rope, some twisting the ropes into complex patterns.

Now, at the end of the class, they are standing still, listening to their teacher, and the gym at Watertown’s Cunniff Elementary School reverberates with electronic beeps.

These noises are the heart-rate monitors that some students have strapped around their chests and wrists, announcing that the wearers’ hearts are no longer getting a rigorous workout.

Information about how fit these students are, based on their heart rates during exercise, will be transferred to a computer, allowing physical education officials to track students’ progress all the way through high school.

The heart-rate monitors are central to a new physical education program in Watertown with an ambitious goal: making students more fit.

School officials noticed a few years ago that local students were mirroring a national trend, falling short of recommended health and fitness standards.

Tests found that 37 percent of sixth-graders were overweight or obese, and nearly two-thirds of eighth-graders fell below fitness standards on a 1-mile run.

So Donna Ruseckas, the district’s physical education director, applied for a federal grant to turn around her program. The school system won $673,000 over three years for the project, which began last year.

“One of the main goals of the grant is that by the end of the grant, the fitness levels of kids will improve by 25 percent,’’ Ruseckas said. “That’s a challenge.’’

The revamped phys-ed plan mirrors other programs created to fight childhood obesity in an increasingly sedentary society, where nationally children ages 8 to 18 spend an average of 7.5 hours a day using electronics, including cellphones, TVs, computers, and video games. Both the federal Centers for Disease Control and Prevention, and Michelle Obama’s “Let’s Move!’’ program say children should get an hour of physical exercise every day, a target only a third of them meet.

After Watertown received the grant, Ruseckas bought 200 heart-rate monitors, so students in grades 3 to 12 could measure whether they were exercising vigorously enough to strengthen their hearts.

The middle school added a new fitness center, with cardiovascular machines and weights.

The high school bought new equipment for its fitness center, where nearly all the old gear was broken. Programs were added before and after school to give students more chances to exercise.

And the district tried to find new ways to get students moving that didn’t rely on the old model of organized sports, such as basketball and soccer.

They wanted to make students more interested in gym classes, and they also wanted to find games that didn’t allow the most gifted athletes to excel while others dragged behind.

So, they added fencing and snowshoeing to the schedule, and in high school the students will be graded on how much their fitness improves over the year.

“We’ll literally be able to track a student’s fitness records from elementary to middle to high school,’’ Ruseckas said. “That’s making really good use of technology through physical education. So for us, it’s not what people would consider a traditional approach for phys ed, which was sport-based, competitive games.’’

One of the biggest challenges is squeezing in enough time for students to get a vigorous workout when phys ed classes meet just two or three times a week.

State law used to mandate a minimum number of minutes that students were required to spend in gym class each week, but those rules were dropped. Now schools are required to have certified physical education instructors lead classes, but there are no gym-class requirements for students. Phys ed now falls into the 990 hours of academic time that students must have in a school year.

Massachusetts, like other states, has a bill pending that would enact National Association for Sport and Physical Education recommendations calling for elementary students to get 150 minutes of physical education each week, and secondary school students, 225 minutes.

But in an economic climate where schools are fighting to keep the programs they have, a bill requiring schools to allot more time and resources to phys ed is considered a long shot.

So Watertown is looking at other ways to get students to spend more minutes exercising each day. At Cunniff Elementary, the federal grant paid for a 7:30 a.m. jump-roping class, which draws more than 60 students 45 minutes before the start of classes.

Gone are the days when students trickled into the gym after they changed, and sat in the bleachers. Before Ruseckas applied for the grant, she noted that students often lost exercise time while everyone waited for the full class to assemble, and then while the teacher took attendance.

In the cavernous Kelly Memorial Gymnasium at Watertown High one day recently, music was playing as students emerged from locker rooms.

The students immediately headed to one of a handful of exercise stations that had them running around an oval, juggling, flinging lacrosse balls, stretching, and doing push-ups.

Once the students were warmed up, and attendance done, teacher Mike Smith led the class downstairs to the refurbished fitness room, where students can lift weights and work out on cardio equipment.

“I feel way more energized than I was,’’ said sophomore Julia Metjian as she used an elliptical machine during class. Metjian said she also walks to school more often this year.

Students in all the schools this winter learned to snowshoe, which turned out to be a popular activity. “We don’t live in an area like Vermont, where kids know snowshoeing,’’ said Marianne Cameron, a phys ed teacher at Cunniff. “Watertown kids don’t know snowshoeing.’’

At Cunniff last week, some of the fourth-graders put on heart monitors as class began. Elizabeth Allen, 9, checked her wrist often, to see how hard she was exercising.

“You get to see how fast your heart is beating,’’ she said. “It’s a good thing to do as a community because you know how fit your heart is. My highest was, like, 130.’’

Learn more about the exercise offerings in Watertown

Strokes and the young

Strokes are becoming more common in young adults. The mystery is why.