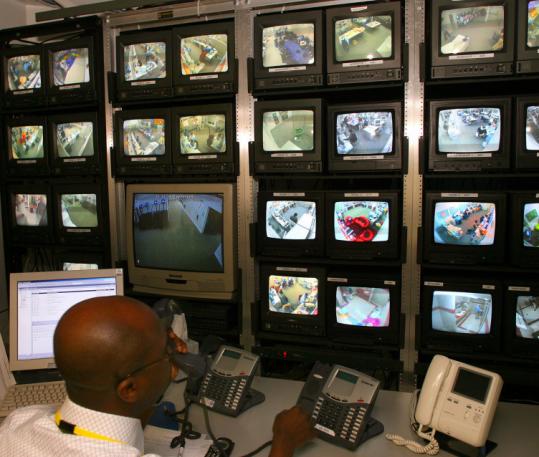 One of two video monitoring rooms at the Judge Rotenberg Center in Canton. Live camera feeds throughout the facility can be viewed, including activity in restrooms. (John Tlumacki/ Globe Staff/ File)
By Donovan Slack Globe Staff / February 28, 2011

WASHINGTON — The Judge Rotenberg Educational Center, a special-needs school in Canton that disciplines students with electric shocks, used a sophisticated lobbying campaign in Congress last year to help defeat a ban of its controversial techniques, according to recently released public documents.

Although the center declined to discuss its strategy for 2011, the legislative battle is expected to be rekindled this year.

The center, the only school in the country that uses electric shocks to modify behavior, launched its Capitol Hill campaign after the House approved a measure last year outlawing the use of restraints and some other devices to control students. The bill did not explicitly reference shock devices, but lawmakers said the ban would have applied to the Judge Rotenberg Center’s practices.

Critics say the electric shocks — which are the subject of ongoing state and federal investigations — are inhumane. But school officials and parents say they are necessary, a last resort to prevent severely disabled children and teens from harming themselves or others.

The center paid $100,000 last year to a law firm headed by former GOP presidential candidate Rudolph Giuliani in a successful effort to help stifle the measure in the Senate, according to 2010 lobbying disclosure records released in January. The bill died in the Senate Health, Education, Labor, and Pensions Committee.

As part of the campaign, it transported parents and students to the Capitol to argue the point in private meetings with senators and staff.

The parents told lawmakers that their children would be dead or institutionalized without the center and its unorthodox methods, said Edward D. Krenik, a top Washington lobbyist who led the campaign.

“They have a pretty powerful story,’’ he said. “There were folks that were visibly moved.’’

The center declined to make available for interviews any parents who participated in the lobbying effort.

Krenik said that he had sole discretion at the law firm, Bracewell & Giuliani, to take on the center as a client and that Giuliani was not involved in the decision. Giuliani’s office declined to make the former New York mayor available for an interview.

School officials declined to comment. They referred calls to a public relations firm in California, which referred questions to a lawyer in Massachusetts, Michael P. Flammia. He said the school hired Krenik and another firm to lobby senators because the “treatment at JRC is critical to survival and education, and we wanted to make sure the bills could not be interpreted to prohibit it.’’

“If you have an issue that Congress is dealing with, the way our system works, you need to have a lobbyist to get your information to the legislators involved,’’ he said.

Last year was the first time the school reported hiring federal lobbyists. It reflects an increasingly sophisticated public relations and government affairs effort mounted by the center, which disclosed in Internal Revenue Service filings that it spent more than a million dollars in recent years on lobbying at the state level.

Nonprofits like the Rotenberg Center are allowed to lobby under federal law, but they are limited in how much they can spend on the activity. The center’s annual budget, which is more than $40 million, means it can spend up to a federal cap of $1 million annually on lobbying.

It appears likely that the center will have to continue its lobbying effort. Supporters of the ban on shocks and other controversial disciplinary and behavioral measures — including last year’s House sponsor, Representative George Miller, Democrat of California — said they will introduce the legislation in Congress again this year.

“Congressman Miller was disappointed the Senate wasn’t able to complete its work to protect children in school from dangerous restraint and seclusion practices,’’ spokeswoman Melissa Salmanowitz said. “He plans to take the issue back up again this year in a bipartisan way.’’

The bill is also expected to be introduced again this year in the Senate committee where it died last year.

Massachusetts state agencies have twice attempted to close the facility, in the mid-1980s and mid-1990s. Legislation banning the electric shocks has repeatedly failed on Beacon Hill. Last year, a top United Nations investigator called the practice torture and asked federal authorities to probe the school’s use of shock discipline. The Justice Department is investigating whether the center is in violation of federal laws on fair treatment of the disabled.

Massachusetts Attorney General Martha Coakley’s office is looking at an incident at the school in 2007, when two students were repeatedly shocked after a caller pretending to be a supervisor ordered they be subjected to the discipline. School officials at the time destroyed surveillance video of the incident.

The push on Capitol Hill began in 2009, after an investigation by the Government Accountability Office found hundreds of cases across the nation in which children were harmed or killed by the use of seclusion or restraints at schools and treatment centers. The office, which did not cite any cases at the Rotenberg Center, concluded that there were no federal laws in place to address the problem.

Miller’s bill would have prohibited schools from using mechanical restraints or devices, which Judge Rotenberg Center administrators feared could have included their shock apparatus, Krenik said. The bill also would have limited the use of seclusion. Forty other legislators signed on as cosponsors, including Democratic representatives Barney Frank and Richard E. Neal of Massachusetts. The measure passed the House 262 to 153 in March 2010.

Aides to Senator John F. Kerry of Massachusetts said parents and students visited his office and asked that he not support the bill, but he was waiting to learn more about the legislation before taking a position on a new law. Kerry is opposed to using electric shocks for punishment.

“This is an inhumane form of discipline, and I’m particularly troubled by it when positive behavioral supports have been so successful,’’ Kerry said in a statement. “I understand that there are ongoing state and federal investigations, and I hope they result in an end to this archaic practice.’’

A spokeswoman for Senator Scott Brown of Massachusetts declined to say if he was lobbied by the center or what he thinks about the legislation or shock discipline.

The Judge Rotenberg Center serves 227 students and residents, including 145 school-age children. Roughly half have behavior and psychiatric issues, while the others are developmentally disabled. School districts in seven states and the District of Columbia send students to the school and pay annual tuition of $220,000 for each.

Matthew L. Israel, a student and devotee of Harvard behavioral psychologist B.F. Skinner, founded the school in 1971. For the first two decades, when nonphysical discipline failed, Israel used pinches, spankings, ammonia capsules, and white noise, among other methods. In the early 1990s, the center began using electric shocks, which it characterizes as “moderately painful.’’

Electrodes attached to students’ arms, legs, or torsos administer two-second shocks when activated remotely by teachers and supervisors. There are two levels of shocks, 60 volt and 66 volt, that transmit currents of 15 and 41 milliamps, on average. Tasers, by comparison, transmit between 2.1 and 3.9 milliamps on average, but for a much longer period than the shocks used at Rotenberg. Flammia said students’ inclusion in the program must first be approved by parents or legal guardians and a judge.

Nevertheless, critics contend that shocks are barbaric and are given for seemingly minor infractions like swearing or not paying attention.

“If it was so good, everybody else would be doing it,’’ said Barbara Trader, executive director of TASH, a disabled rights group in Washington.