Patrick gives Romney praise he may not want

Lauds his role in health overhaul 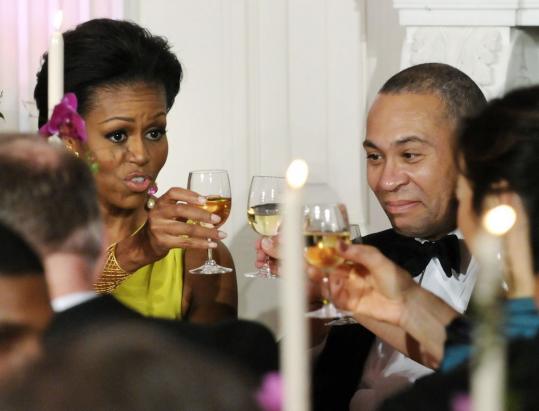 Michelle Obama shared a toast with Massachusetts Governor Deval Patrick at a dinner for the National Governors Association at the White House in yesterday. (Jonathan Ernst/ Reuters)
By Theo Emery Globe Staff / February 28, 2011

Patrick, appearing on ABC’s Sunday news show “This Week’’ while attending the winter meeting of the National Governors Association, singled out health care as an issue the former Massachusetts Republican governor “deserves a lot of credit’’ for. “One of the best things he did was to be the coauthor of our health care reform, which has been a model for national health care reform,’’ Patrick said.

The compliment is probably one Romney would be happy to do without as he courts GOP primary voters in his expected bid for the White House.

The sweeping health care overhaul that Obama promoted and Congress passed last year stoked the fury of conservative voters in last fall’s election, and the issue will be front and center in the 2012 presidential election. And among all the prospective candidates, the issue poses the biggest political headache for Romney, who as governor proudly championed the overhaul in Massachusetts. It was considered by many to be his signature accomplishment.

Since he left office, Romney has defended the Massachusetts overhaul as a legitimate effort by the state to experiment with health care. He has been sharply critical of the federal law, which he says should be repealed. His defense of his legacy as an architect of the law has not been without caveats. He has criticized the Democratic-controlled legislature and Patrick for how the law has been implemented.

Some of Romney’s probable opponents for the 2012 GOP nomination have hitched Romney to the Massachusetts law, and not in a complimentary manner. In his recently released book, former Arkansas governor Mike Huckabee called the Bay State law “socialized medicine,’’ and derisively described it as “Romneycare,’’ a not-so-subtle tweak of Obamacare, the turn of phrase favored by critics of the national law.

A Romney spokesman, Eric Fehrnstrom, said last week the former governor is proud of what he accomplished in obtaining near-universal health insurance coverage for Massachusetts residents. Fehrnstrom said last night that “the law works for Massachusetts but it should be up to each state to determine what’s right for them.’’ He did not address the question of whether he thought Patrick’s praise of Romney was designed to further tie Romney to the inception of health care overhaul.

“To make that health care argument and defend his position was hard enough in 2008,’’ he said. “Given strategically where the Republican Party went for the election of 2010 makes it almost impossible for him to sweep this under the rug.’’

Patrick is a close ally of Obama who will probably serve as a proxy for the president on health care and other issues during the upcoming presidential campaign. With his words highlighting Romney’s hand in the Massachusetts law, Patrick also lumps his predecessor in with the federal plan it spawned.

Though Patrick said the White House has not officially asked him to be a spokesman, he nonetheless acted as a surrogate of sorts yesterday, saying during his appearance on the televised panel that Obama had been saddled with a deficit “run up through the roof’’ under President Bush and has tried to reach out to Republicans. At the same time, he accused Republicans of rebuffing those efforts, and said GOP leaders needed to “act like the adults we expect in that building.’’

But it will probably be his comments about Romney that will be remembered. Immediately after the appearance, Patrick sat on a panel about Medicaid, the system of health care insurance for the poor, in which he again discussed the Massachusetts overhaul effort. Afterward, Patrick scoffed at the notion that politics were at play in his praise of Romney. “It’s just the truth,’’ he said, and insisted that he was doing nothing more than paying Romney a deserved compliment.

“He signed our bill. That’s all I said, and I congratulated him for it. I told him so at the time, and I’ve said it publicly,’’ Patrick said. “It was a great thing. It showed that there was another choice than the usual two, which is the perfect solution or no solution.’’

McLean predicted Patrick’s comments would resurface in negative ads from primary opponents. “Giving him credit for reforming the health care system and being a model for national reform is not something that a Republican candidate running for the presidency wants to hear,’’ he said. “With compliments like that, you don’t need attacks from your own party.’’

Mississippi Governor Haley Barbour, another possible GOP presidential candidate, declined to take a swipe at Romney, saying, “I’m not going to get into the ups and downs of presidential politics.’’ But without naming Romney, he went on: “I will say we don’t want the Massachusetts health care plan in Mississippi.’’

Asked if any Republicans were trying to link Romney to his health care legacy, he responded: “Not by me.’’

Theo Emery can be reached at temery@globe.com.