To help rein in health care costs, we're supposed to pay more attention to our bills. But guess what happens when you try?

When we buy a microwave, we carefully compare prices and double-check the receipt. Yet when it comes to our health care bills, many of us barely give them a second look – they usually go directly to our insurers. But with practically everyone now saying one step to solving the problem of skyrocketing costs is for us to become more vigilant consumers, I decided to look into what seemed an especially egregious charge on one of my mother’s recent Medicare statements.

In November, a Town of North Andover ambulance brought my mother to Lawrence General Hospital for tests. Later that day, an ambulance from a private company, Patriot Ambulance Inc., took her home. Looking at the Medicare statement, I saw North Andover charged $650 for the 4-mile trip. That seemed rather steep. But then I saw the Patriot bill: $1,153 for the return trip on the same day. What was up with that?

To try to find out, I called Patriot Ambulance and spoke with co-owner David Walton. Yes, he agreed, his charge to Medicare ($990 base rate plus $40.70 per mile) “does look horrible” compared with North Andover’s ($563 plus $22 per mile). But because Medicare regards ambulance service to a residence as not medically necessary, it typically reimburses nothing for such trips. That’s why Medicare notified my mother that she “may be billed” Patriot’s full $1,153 tab. (She hasn’t been – Walton says his firm doesn’t expect senior citizens to pay such hefty bills themselves; her personal bill currently stands at $257.)

Medicare did, however, pay North Andover $316, because that trip was to the hospital. And my mother’s secondary insurer, Blue Cross, kicked in another $79.

Though private ambulance operators such as Patriot say Medicare rates barely cover costs, North Andover Fire Chief Andrew Melnikas told me that his town’s service is “not a money-losing operation.” In fact, its two ambulances, which answer 3,000 calls a year, “provide significant revenue to the town’s general fund.” Of course, the costs for North Andover’s vehicles are largely borne by taxpayers, whereas private operators like Patriot pay all their expenses from their own revenue stream.

So if Patriot is unlikely to collect its initial steep fees, why bill for them in the first place? Because in this Alice in Wonderland health care world, some people actually do pay them. Car insurance companies, for example, may cut such checks when their clients are in accidents, a windfall Walton says he needs to offset lower payments from Medicare.

Which made me wonder how Medicare sets the ambulance reimbursement rates in the first place. “The Ambulance Fee Schedule was developed through negotiated rulemaking with full industry input and agreement,” Medicare spokeswoman Ellen B. Griffith told me by e-mail. And the fees have been increased to keep pace with inflation “virtually every year,” even as payments for other services have not. In other words, stop whining, ambulance operators, you’ve got it pretty good.

Medicare isn’t alone in trying to limit ambulance costs. Health insurance giant Blue Cross Blue Shield of Massachusetts has been telling operators that they must accept the insurer’s rates if they want to participate in its 2.9 million-member network. According to spokesman Jay McQuaide, the state’s Blue Cross customers spend about $80 million a year for services that do not “improve the quality or effectiveness of the care” – $60 million of that total goes toward ambulances. “We do not believe it is fair to [ask customers] to pay out-of-network providers, such as ambulance companies, 300 percent to 500 percent more than what the federal government pays,” McQuaide says.

That certainly seems reasonable. But Walton also made some reasonable points. As a reporter, I’m used to dealing with complex material, but this drive down one of the countless, curvy roads that merge into the Health Cost Superhighway left me both more informed and more confused. Maybe it really is easier to remain clueless and indifferent about our medical bills. The alternative, as a friend who has spent decades in the health care trenches told me, is “to be clueless and terrified.”

Phil Primack is a writer and editor in Medford. Send comments to magazine@globe.com. 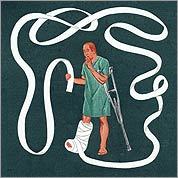