A cut above: Surgery meets silicone 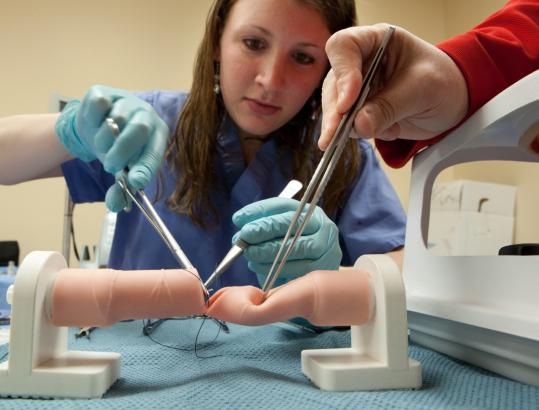 A few weeks before new residents arrive at Massachusetts General Hospital’s cardiothoracic surgery program, they each get a heart in the mail.

It’s as big as a large fist, with thick maroon walls covered with a thin yellowish layer of fat, clearly defined atria and ventricles, and the great vessels cut off at the top. The surface is slippery, slightly moist. Though it’s made of silicone, it’s eerily lifelike.

The package also includes basic surgical instruments, snippets of artificial veins, and a manual. For the duration of the residency — and especially in the first year — this will be the young doctor’s personal workshop, a place to hone critical skills and make mistakes, safely.

After each procedure, the residents cut out the tiny coronaries and insert new ones. Once a week, Dr. Jennifer Walker evaluates their work and gives them supervised training in a lab with pig hearts.

“Our residents all get taught, to varying degrees, in the operating room,’’ she said. “But because our patients have gotten so much sicker and the operations are so much more complex, the old apprenticeship model doesn’t quite work in terms of getting over-and-over, repetitious, hands-on practice. So that’s why I developed the simulation program.’’

This, many doctors will tell you, is the future of surgical training.

Gone are the days of “see one, do one, teach one’’ — there is too much to learn, and not enough opportunities to do it safely. Cadavers are scarce and available only at highly specialized labs. Operating on live animals, once common, is now considered unethical. And animal parts from slaughterhouses, while valuable, are messy and require careful handling.

So increasingly, residency programs are turning to companies such as Chamberlain Group, a small firm in Great Barrington that has carved out a niche making hearts, bowels, and various other body parts for medical training.

Started in 1999 by a couple, Eric and Lisa Chamberlain, the company now does several million dollars’ worth of business each year, serving two primary markets: medical device makers who need to demonstrate their products and train doctors to use them, and hospitals.

Device-maker clients include , Johnson & Johnson, and , maker of the robotic da Vinci Surgical System, for which Chamberlain produces training materials.

The da Vinci work, in particular, has taken their products around the globe — an accomplishment they track with pins on a map. They are also in 48 US states, all but Arkansas and Alaska.

Neither Eric nor Lisa Chamberlain has any medical training.

Until the late 1990s, both worked in the movies, doing visual effects such as the “bullet-time’’ slow motion in “The Matrix,’’ an airplane explosion in “Eraser,’’ and various other illusions.

They had moved to the Berkshires for some movie projects, and one day, they got a call from Mark Curtis, a subcontractor who did staff training for medical device makers. “He said, ‘I hear from your silicone supplier that you guys are big model makers. Do you want to make medical models?’ ’’

They had never done any body parts or prosthetics, but decided to try. The job was to make legs to train doctors with a device to harvest a piece of the saphenous vein; Curtis brought them a video of the procedure.

“We were truly grossed out,’’ Lisa Chamberlain said. “But we got hooked.’’

They relished the challenge, she said, and liked the chance to stay in New England. Plus they had gotten disillusioned with the movies. “Eric worked on ‘Judge Dredd’ for 10 months, and then the movie was terrible.’’

Curtis kept bringing them jobs, and they built the models with a few basic tools, in a former auto body shop. Eric Chamberlain did the designs and found the materials; sculptor Stephen Thurn molded the figures by hand, in clay.

Then, in late 1999, Curtis closed his business but let them take over his toll-free number. After getting a call for models for a conference, they decided to attend, and they realized the size of their potential market.

Today, they have 20 employees and have expanded into the building next to the body shop. Eric Chamberlain uses 3-D design software that can capture data from CAT scans; Thurn sculpts virtually, on FreeForm software from SensAble. They have four 3-D printers and high-tech machinery; they make items by the hundreds and thousands and have a patent for a beating heart.

Yet the body parts are hand-glued and painted, and the creative process is long and labor-intensive: going into labs and hospitals, consulting with medical specialists, testing materials and shapes, and remaking the models over and over, until they’re realistic enough.

“As they put a needle on this, the feel of the needle needs to be right,’’ Lisa Chamberlain explained as she held a piece of 1.5-millimeter vein. “Because if you train somebody with the wrong feel, if it feels like a rubber hose and then they go into delicate vessels, they could damage the tissue.’’

The products are expensive — the hearts MGH buys, for example, are about $1,200 — but many come with replaceable parts, so they can be reused (coronary pieces are $12).

Other items are good for multiple procedures: A kit for gynecological robotic surgery, for example, can be used to remove seven uterine tumors, then for a hysterectomy, then a sacropoplexy.

About two-thirds of the Chamberlains’ revenue comes from medical device companies, Lisa Chamberlain said, but they have also had successful collaborations with teaching hospitals, such as Baystate Medical Center in Springfield, which has a large simulation lab.

Dr. Neal Seymour, medical director of the lab, said simulations are crucial to ensure residents get the focused, deliberate practice they need, even with skills they won’t use every day.

One such skill is cutting out and stitching human intestine, which Seymour called fundamental for general surgeons, but which is rarely used now, with the rise in minimally invasive surgery.

Residents can practice on pig intestines, but as with pig hearts at MGH, which Walker buys frozen and thaws, it’s cumbersome. So Baystate called the Chamberlains, and using a $150,000 grant from the John Adams Innovation Institute, they developed a silicone model and a training curriculum.

As part of first-year training, Baystate surgical residents put the 10-inch pink tubes on small stands to practice cutting and stitching, then practice again in a simulated operating room, with the tubes stuck inside a lifelike abdominal case.

On a recent afternoon, Dr. Jose Espinal, a surgical fellow, used a piece to practice miniature sutures in a laparoscopic surgery simulator, watching himself on a screen. He said he goes into the lab as often as he can.

“Personally, it really makes a difference,’’ he said. “You really feel that confidence, coming and making your mistakes in here. That’s how we get expert.’’

The Baystate doctors are now working with the Chamberlains on other models: for sewing a pancreas to a bowel and for laparoscopic hernia repair.