No easy solutions for alarm fatigue 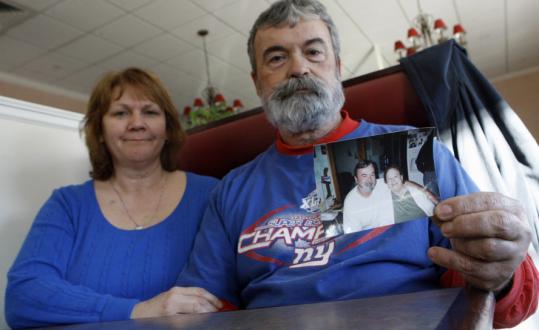 Suzon and Howard Warner said the death of his mother, Madeline (in photo) because of an ignored heart monitor alarm shouldn’t have occurred. (Stew Milne for The Boston Globe)
By Liz Kowalczyk Globe Staff / February 14, 2011

On the morning of Jan. 28, 2007, a neighbor looked through Madeline Warner’s window and saw her elderly friend passed out in a recliner. Medics rushed Warner to a hospital near her Connecticut home, and a day later she was transferred to UMass Memorial Medical Center in Worcester.

Doctors suspected she had had a heart attack, but Warner, 77, suffered from enough medical problems to fill a textbook, including diabetes, kidney disease, asthma, spinal stenosis, chronic back pain, and strokes, according to medical records provided by her family. Stents propped open her arteries, and a pacemaker helped her heart beat.

Even so, Warner was tough — she had raised 11 children and worked in a factory for 25 years. “Every time something would happen, we would say, ‘Is she going to pull out of this one?’ ’’ said her son Howard. “And she always did.’’

This time, she did not. Warner died after nurses failed to respond to an alarm that sounded for about 75 minutes, signaling that her heart monitor’s battery needed to be replaced, state investigators found.

It’s an all-too-common problem in hospitals — alarm fatigue — but War ner’s death led UMass Memorial to do something about it. The hospital linked alarms to nurses’ pagers and cellphones, and now it plans to reduce the number of alarms by connecting fewer patients to monitors, in hopes that nurses will not have their alertness numbed by as many false alarms.

Hospitals, monitor manufacturers, researchers, and federal regulators are similarly grappling with how to reduce the rash of unheard and ignored alarms and other patient monitor problems — which the Globe reported yesterday was linked to more than 200 deaths nationwide between 2005 and mid-2010, and, experts say, probably far, far more. But they are finding answers elusive.

“If there were an obvious solution to this problem, we would have done’’ it, said Dr. James Bagian, the former chief patient safety officer for the Veterans Administration hospitals, where he said there have been multiple patient deaths and close calls because alarms were turned off or the volume was turned down. “No one has one.’’

Solutions being explored range from relatively simple fixes to sophisticated technology. Some — like UMass Memorial’s effort to reduce the number of monitored patients — are being tried out in hospitals where patients have died, while others are being tested in labs or debated by regulators. Most are expensive, however, and may not be practical, patient safety experts say, at a time when hospitals are under enormous pressure to cut costs. They include:

■ Improving monitor technology, to sharply decrease the number of false alarms, which some studies have shown exceed 85 percent. New machines would simultaneously sense multiple measures of a patient’s health to more accurately gauge whether a patient is really in crisis.

■ Hiring more nurses, and assigning some to do nothing but watch monitors for alarms. Nurses say hospitals need to be staffed more robustly to ensure alarms are heard and nurses have time to respond to each one. “There are fewer RNs,’’ said Colleen Wolfe, a nurse who has worked on various units at UMass Memorial, speaking about hospitals generally. “We don’t have the staff to get there and physically get eyes on patients the way we know we need to. No technology can take the place of the nurse’s eyes.’’

■ Strengthening voluntary industry standards or federal rules for monitor design and use, such as requirements for how loud alarms should be, or how long monitors should delay sounding an alarm to ensure an apparent problem is real and reduce false alarms.

Doctors expected Warner to pull through when she arrived at UMass Memorial. According to her hospital records, she underwent cardiac catheterization on Jan. 29 and the procedure found no significant blockages in her arteries. “I anticipate she will be in the hospital 24 to 48 hours,’’ wrote Dr. Joel Gore, a cardiologist at UMass Memorial.

But two days later, when she was scheduled to go home, a nursing assistant discovered Warner at 5:50 a.m. “without a rhythm on telemetry.’’ Caregivers rushed in to perform CPR and pump in drugs they hoped would restart Warner’s heart. After 15 minutes, they realized it was fruitless.

Later that morning, nurses studied the recordings from the heart monitor. They saw it had stopped working at 5:08, when the battery died, so no crisis alarm sounded when Warner’s heart failed. Her cardiologist, who is not identified in the state report, told state investigators that he did not share this information with the family because “they were relieved that the patient’s pain and suffering were over’’ — a lapse for which the state criticized UMass Memorial. And, he reasoned, even if a monitor had alerted caregivers to Warner’s cardiac arrest, medical intervention would not have saved her.

Weeks later, hospital officials arranged a meeting with Howard Warner and his wife, Suzon, and revealed “an equipment malfunction,’’ the couple said.

“It shouldn’t have happened,’’ Warner said.

To UMass Memorial’s credit, the story did not end there. “That patient death was a catalyst for us,’’ said Dr. Robert Klugman, the hospital’s chief quality officer.

Low-battery warnings now appear on the pager or cellphone of the patient’s nurse. If he or she does not respond within a minute, a page goes to all nurses on the unit — as do alarms for potential life-threatening changes in patients. The hospital tossed its $1 leads, wires that run from a patient’s chest to the monitor, and purchased $14 leads, which rarely fall off, significantly reducing “leads-off’’ alarms.

Klugman decided to conduct a study of patients on cardiac monitors at UMass Memorial and three other Massachusetts hospitals over the course of one week in 2008. He found that at UMass alone, 40 percent of patients, or 73, didn’t need to be on monitors at all, based on American College of Cardiology criteria.

“Cardiac telemetry saves lives, there is no question about that,’’ Klugman said. “But there’s the potential of unintended consequences and that’s what’s happening here. It’s overused.’’

Like most hospitals, UMass Memorial has increased its number of cardiac beds with monitors — from 168 in 2008 to 221 now — to accommodate sicker patients. When technology is readily available, he said, doctors end up ordering it for patients who might not benefit. “They feel a certain comfort level when they have a person on a monitor.’’

So the hospital plans to implement new guidelines for doctors on when to order cardiac monitoring for patients, and how often they must recheck their orders.

But persuading doctors to put significantly fewer patients on monitors will be a huge challenge, because monitors can be an important tool for alerting staff to problems. Other solutions adopted at some hospitals also are difficult. For example, hiring technicians whose sole job is to monitor the monitors is expensive — and they can suffer alarm fatigue, too.

The most promising technology is a new generation of “smart monitors’’ that would check not only a patient’s heart rate and rhythm but also arterial blood pressure, blood oxygen level, and pulse, considering all these parameters together before triggering an alarm. If a patient coughs, and his or her heart rate soars temporarily, a standard cardiac monitor alarm may sound; the newer design would also know that the patient’s blood pressure and other important indicators are stable.

“If you look at just one signal it could be artifact,’’ said Dr. Paul Hickey, chief of anesthesia and critical care at Children’s Hospital Boston. “If you look at multiple signals, a smart computer can reduce the rate of false alarms and make the alarms that get through much more meaningful and real. And nurses and doctors taking care of those patients will have a much lower fatigue rate.’’

Hickey is working with engineers at the Massachusetts Institute of Technology to build a prototype, but a finished product is far off.

GE Healthcare, a monitor maker, is testing similar technology for intensive care units. The company said the new software significantly reduces the number of false heart rate alarms because it uses information from a variety of physiological signals to evaluate patients, rather than just cardiac information. At one hospital, “the technology resulted in an 89 percent reduction in false asystole alarms’’ (asystole refers to a state of no cardiac activity), compared with a traditional cardiac monitor, the company said in a written statement.

Dr. Roger Mark, head of the Laboratory for Computational Physiology at MIT, said the smart monitor approach is probably only appropriate in the intensive care unit. “By the time you get to the regular floor you are not going to wire patients up to all these extra devices. I don’t have a good suggestion about how you’re going to make a major dent in false alarms there. All the companies would love to solve this problem.’’

The head of the Food and Drug Administration’s device division, Dr. Jeffrey Shuren, said alarm fatigue is a “big problem’’ and that the agency is “finding cases where staff turned off’’ alarms and “turned them off inappropriately.’’

He said he is considering convening meetings with manufacturers and hospitals to work out better systems, as the agency did to solve problems with infusion pumps and external defibrillators in recent years. A spokeswoman said the division has formed a team to develop solutions and assess the adequacy of current standards for monitor alarms.

Meanwhile, Shuren said, “there is going to be an onus on caregivers.’’