THIS STORY HAS BEEN FORMATTED FOR EASY PRINTING
Winter Survival Guide

Don’t believe the rumors about this season’s megacase of the sniffles. 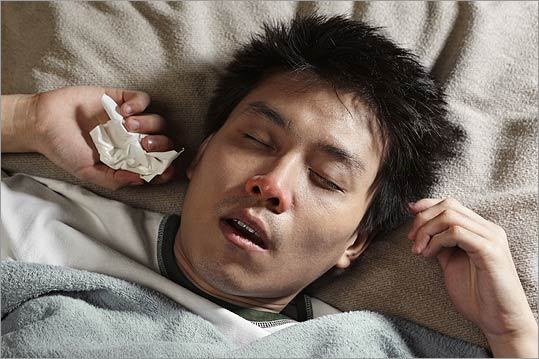 You’ve had it. Your mom’s had it. Every 4-year-old in the neighborhood has had it. You know it by its symptoms: a perpetually dripping nose, a persistent cough, and the feeling that little knives are being sharpened on your tonsils. Welcome to another cold and flu season, but don’t be fooled by gossip that pegs this as a particularly sickly one. As far as experts can tell, colds and flus are tracking at their normal, ho-hum average this winter, which means tales of super-bugs are probably more myth than reality.

“Common respiratory illnesses are prevalent at this time of year,” says Dr. Alfred DeMaria, epidemiologist for the Massachusetts Public Health Department. The perception that they’re particularly bad is part of the annual surprise of getting sick in the first place, he says, “like people are suddenly surprised that it’s cold outside.”

Colds and flus are caused by a number of different viruses, and though they often have overlapping symptoms (congestion, cough, aches), the flu tends to be more severe and be accompanied by high fever. Hopefully, you already got your flu shot: The virus strains that health officials see circulating are matched in the vaccine, says DeMaria, which should make the shot effective at preventing infection.

But then why all the swirling stories about this winter’s uberviruses? Chalk it up to a kind of squeaky-wheel effect, DeMaria says. He hypothesizes that people who do get lousy, lingering colds are going to complain (and loudly), creating the sense that this year’s illnesses are worse than ever.

Which isn’t to say that if you think you have a particularly nasty cough, it’s mostly in your imagination. DeMaria admits that sometimes bad viruses do pop up but don’t make it onto his department’s radar.

So keep your hands away from your face until you’re sure they’re clean, and stay home if you’re feeling sick. And while chances are you’ll catch a cold this winter, it probably won’t be the worst – or the last.