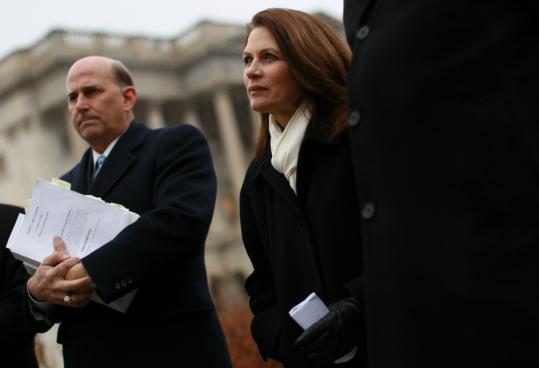 WASHINGTON — A health care repeal vote expected today will send a highly symbolic political message — the icing on the midterm elections that gave Republicans control of the House — but the GOP’s effort to undermine the rollout of the contentious measure and put its own imprint on health care will probably hinge on smaller attempts to change the law.

The complete legislative repeal that House Republicans are promising to pass today is all but doomed, because the Democrats who still control the Senate have said they will not approve it. Even if a repeal did emerge from Congress, President Obama would veto it.

So Republicans are already looking at an alternative course. They are scheduling hearings to grapple with reforming the medical malpractice insurance system — long a key goal of the GOP but something Democrats left out of last year’s landmark health overhaul measure. They are likely to seek repeal of some specific provisions, such as a new tax on medical devices, a levy that has drawn fire from Senator Scott Brown of Massachusetts. That 2.3 percent tax is expected to raise $20 billion over 10 years.

Brown has also teamed up with Democrat Ron Wyden, of Oregon, on legislation that would allow states to more quickly opt out of certain portions of the health care law.

On another front, Republicans say they are laying plans to eliminate or reduce funding for certain agencies that will be in charge of enacting the new law — a strategy of fiscal starvation that Democrats pursued in the 1970s in a bid to cut off funding for the Vietnam War. Republican leaders have said one of the first targets in such an effort would be billions that the Internal Revenue Service will need to ramp up its enforcement of new health care regulations, including a requirement that nearly all Americans obtain coverage beginning in 2014.

“There’s a serious discussion about laying the groundwork for individual, stand-alone pieces of legislation,’’ Representative Steve King, an Iowa Republican, said in an interview yesterday.

Democrats and supporters of universal healthcare, meanwhile, say they are looking forward to a political do-over, after they got thumped in the midterm elections over healthcare.

“I think this gives those of us who supported the Affordable Care Act a new chance to do much better than what we have done so far in explaining what is in the legislation, and securing much broader public support,’’ said Ron Pollack, executive director of Families USA, which backs the health care overhaul.

The 10-member, all-Democratic Massachusetts delegation is expected to vote in lockstep against today’s repeal measure.

Representative Edward J. Markey, a Malden Democrat, distributed statistics about how Boston area residents would be affected if the law is repealed. It would mean 12,500 young adults in the area would not be allowed to stay on their parents’ health plans; 1.1 million people would be denied new preventative care benefits; and 113,000 would lose health care tax credits, according to Markey.

The White House has spent the last few weeks spotlighting the law’s more popular aspects — such as permitting children up to age 26 to remain on their parents’ insurance plans, and provisions that prevent children from being denied coverage because of pre-existing conditions.

President Obama indicated last night that he was open to making changes to the law, while steadfastly defending the overall law.

“I’m willing and eager to work with both Democrats and Republicans to improve the Affordable Care Act,’’ he said. “But we can’t go backward. Americans deserve the freedom and security of knowing that insurance companies can’t deny, cap, or drop their coverage when they need it the most, while taking meaningful steps to curb runaway health care costs.’’

“If this gets in to a food fight back and forth, I think this is a food fight that we’re going to win big time,’’ Senator Sheldon Whitehouse, a Rhode Island Democrat, said. “Because when you take away the veil of quote ‘Obamacare,’ it is stuff that Americans like and count on and that defends them when they get ill.’’

Micah Weinberg, a health policy specialist at the New America Foundation, a public policy think tank, said Republicans will have a difficult time rolling back the expansion of Medicaid to insure more low-income Americans, and subsidies to help people pay for private insurance — elements that lie at the heart of the law. Because they are social-service entitlements, they cannot be simply reduced with the stroke of a pen.

“This isn’t the sort of thing the Republicans will be able to monkey around with during the course of the regular budgeting process,’’ he said.

Republicans may be able to score more points by pursing malpractice limits, a provision that is favored by physicians and hospitals but has been opposed by trial lawyers.

The House Judiciary Committee is planning to hold a hearing tomorrow on medical liability reform.

“The current system is quite dysfunctional for patients and physicians and health care costs,’’ said Dr. Alan Woodward, vice chairman of the Massachusetts Medical Society’s committee on medical liability. “What we want to do is move to a system that is fundamentally different.’’

Representative John Kline, chairman of the House Education and the Workforce Committee, is interested in studying ways to roll back the so-called “employer mandate,’’ which will require businesses with more than 50 employees to provide health care to their employees or pay a penalty.

“We want to take a look at that and see what impact that has on jobs,’’ said Brian Newell, a spokesman for Kline and the committee.