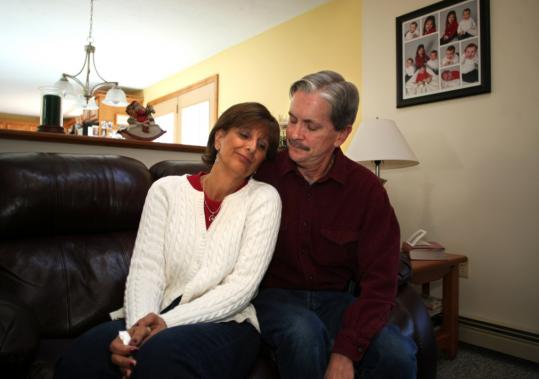 Lorraine Heidke-McCartin is battling breast cancer, and is frustrated, along with her husband, Phil, at how difficult it is to get cancer drugs that appear to be working. (John Tlumacki/Globe Staff)
By Robert Weisman Globe Staff / January 5, 2011

HANSON — On first meeting, you would not guess that Lorraine Heidke-McCartin, a cheerful woman who raised four children, has been battling an aggressive form of breast cancer since 2006.

During that time, Heidke-McCartin, 54, has experienced heartening victories and wrenching setbacks. Last summer, her hopes were buoyed when her doctors said she was a good candidate to take a promising experimental drug at Boston’s Dana-Farber Cancer Institute. The treatment, called T-DM1, had reduced patients’ tumors — with few side effects — during clinical trials.

“They were feeling very encouraged about this drug,’’ Heidke-McCartin recalled. “I said, ‘Can I tell my kids this is good news?’ ’’

Yes, her doctors said. But in late August, shortly before the treatments were to start under a so-called expanded access program, the drug’s maker, the Genentech division of AG, shut down the program in Boston after the Food and Drug Administration refused to speed the approval process.

The about-face underscores the plight of thousands of patients whose lives can be thrown into upheaval by decisions about who can receive experimental drugs. Desperate to regain their health, they might be willing to try almost any treatment, even if it is unproven.

But regulators and companies also must make sure a drug that is initially effective does not later prove to be dangerous. That requires years of clinical trials. And to make trials scientifically valid, some patients enrolled in them — no matter how ill — don’t receive the drug being tested.

In certain cases, however, “compassionate use’’ of experimental drugs is permitted through expanded access programs, like the one Heidke-McCartin was headed for in Boston.

Four months after the Dana-Farber program was scrapped because the FDA denied accelerated approval, she is still fighting HER2-positive metastatic breast cancer. But she is finally taking T-DM1, which combines Genentech’s powerful antibody with a cancer-killing agent made by a Waltham biotechnology company,

To get it, she must travel to a hospital in Fairfax, Va. — every month, at her own expense.

The 950-mile round trips are exhausting, but Heidke-McCartin said she manages because of her faith, her husband, Phil McCartin — who has been her chief medical advocate — and her growing family, including five grandchildren born since her diagnosis.

“I was ready to give up,’’ she said, describing side effects from other cancer drugs that ranged from nausea and hair loss to yellowed palms. “Then I would look at my grandchildren and get back on my feet again.’’

Genentech is moving forward with the regulatory approval process for T-DM1, but based on the current FDA timetable, it won’t reach the market before 2013. For now, it’s available only to patients in trials and those eligible for treatment at 13 expanded access sites across the country — none within 450 miles of Boston.

“There are hundreds or potentially thousands of patients over the next two years who won’t have access to a drug that clearly has benefits for them,’’ said Dr. Ian E. Kropp, assistant professor at Harvard Medical School and a breast cancer specialist at Dana-Farber.

FDA officials won’t talk about their decision to deny accelerated approval for T-DM1, citing a confidentiality policy regarding filings and deliberations on experimental drugs.

To gain accelerated approval status, a drug must fill an “unmet need,’’ and patients in mid-stage trials need to first exhaust all other approved options. Heidke-McCartin, who has never been enrolled in a trial, has endured at least eight treatment regimens, some of which proved temporarily effective.

If a faster approval process for T-DM1 had been allowed, doctors could have prescribed it anywhere while Genentech completed procedural steps needed for full approval. But after the FDA decision, Genentech officials decided not to add another seven sites — including Dana-Farber — to the expanded access program.

Under the scaled-back program, “there are probably some geographic holes, and the Northeast probably is one,’’ said Krysta Pellegrino, a spokeswoman at Genentech’s South San Francisco, Calif., headquarters. “The priority is how do we get full approval for T-DM1 as soon as we can because that’s in the best interest of the majority of women who could benefit from the drug.’’

The company recently started enrolling patients in a late-stage clinical trial at 95 locations around the country, including Dana-Farber. Half the patients are assigned at random to the experimental drug while the other half are given a treatment now on the market: a combination of the drug Tykerb with the chemotherapy Xeloda.

Researchers worry that if the health of patients taking Tykerb and Xeloda worsens, they might leave the trial to get T-DM1 by signing up for the expanded access program. That would compromise the integrity of the study and further bog down the approval process for T-DM1, they say. If more sites offered such expanded access, they noted, the likelihood of trial patients defecting would increase.

Such scientific concerns rankle breast cancer patients who only want to get a drug that might work where others have failed.

“When it comes to something like this, a drug that everyone’s excited about, to not allow patients access to it is criminal,’’ said Ann Maskalenko, an East Kingston, N.H., psychotherapist and breast cancer patient who wants to try T-DM1 in Boston. Only a small number of patients are permitted to take part in a clinical trial, and drug makers typically favor the healthiest subjects.

Phil McCartin, Heidke-McCartin’s husband, said patients’ needs get lost in a bureaucratic process that is supposed to help them. McCartin has become a self-taught specialist on cancer therapies since his wife was diagnosed.

Though he is a social worker by profession, McCartin regularly pores over articles from the New England Journal of Medicine and medical newsletters. Decisions on access to experimental drugs are made without patient input, he said.

“There was no patient at that table that day in the summer’’ when the FDA opted not to grant accelerated approval, McCartin said. “We were represented by doctors. I guess they never had a close friend or family member who had HER2-positive metastatic breast cancer.’’

That lack of representation is partly because clinical trials are more focused on getting drugs to market than immediately benefiting individual patients, said Dr. Irene Kuter, a breast cancer specialist at Massachusetts General Hospital in Boston. It might be better for the FDA to mandate a two-level approach, Kuter said — give experimental drugs to late-stage patients right away and observe the results, while also testing them more widely in patients who are not critically ill.

“What I find myself saying to patients again and again is it’s a shame that there aren’t more trials designed for the patients who really need the drugs and don’t have other options,’’ Kuter said.

Dr. Eric Winer, director of the breast oncology center at Dana-Farber, disagrees with the FDA decision on T-DM1, but he doesn’t support giving it to patients outside of a trial unless the agency indicates approval is imminent.

“It’s a great drug,’’ he said. “But once the FDA made the decision, patients shouldn’t be able to get the drug except in a legitimate clinical trial where researchers can ask the questions that will lead to the drug approval.’’

And answering those questions could take several more years.

Lorraine Heidke-McCartin’s story illustrates the impact of cancer on the lives of families, as well as their resilience. Her first husband, Peter, died from melanoma in 1991 when their daughters were 7, 11, and 13 years old. Her husband Phil’s first wife, Colette, died from breast cancer in 1992 when their son was 4. She and Phil met at a grief support group.

About four years ago, shortly after her daughter’s wedding, Lorraine complained about a pain in her arm. Tests showed she had breast cancer that had spread to her lymph nodes.

A PET scan also revealed cancerous spots on her liver. She was referred to Dr. Kuter, the Mass. General oncologist, who started her on a series of aggressive treatments.

McCartin can tick off the names of drugs that have prolonged his wife’s life, but even he can’t keep up with all the details of her treatment regimens. “We’ve lost track of how many chemo combos we’ve had,’’ he said.

They are hopeful about T-DM1 because it is so targeted and has fewer side effects than other drugs.

McCartin likens it to a heat-seeking missile, attacking only cancerous cells.

So they travel to Virginia. The monthly trips are taking a toll on Heidke-McCartin, but she is determined to keep going. The alternative — a potential two-year wait for T-DM1 in Boston — just isn’t feasible.