Maine dispensary may be 1st in East 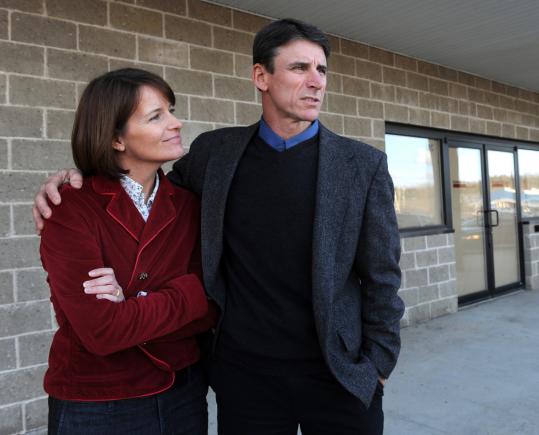 Tim and Jenna Smale plan to open a dispensary in Maine where they will grow and sell medical marijuana. Tim Smale says use of the plant to treat his migraines has given him his life back. (Fred Field for The Boston Globe)
By Brian MacQuarrie Globe Staff / December 28, 2010

AUBURN, Maine — In the cavernous confines of a long-vacant store in a standard-issue shopping plaza, an earnest couple are cultivating plans for what could be the first dispensary for medical marijuana east of the Mississippi River.

Called the Remedy Compassion Center and expected to open this spring, the dispensary is one of eight that state health officials will allow in Maine after Jan. 1. In its 10,000 square feet, set next to a craft store, the center will grow, harvest, and sell marijuana.

“It’s a wonderful medicine I hope to share,’’ co-owner Jenna Smale said in the space where she and her husband, Tim, see the beginnings of a thriving business.

God, the Smales said, wants them to sell marijuana to the sick.

“We know we’re doing what we’re called to do, which is help patients who are suffering with a natural herb that was put on the earth,’’ said Jenna Smale, 43.

“I’m responding to a personal call in my life,’’ said Tim Smale, 51, dressed in a tweed jacket and casual business attire. “We have the guts to take our personal funds and follow the Lord.’’

Their personal investment so far is more than $100,000 and included savings, retirement money, and life insurance, Tim Smale said. But this commitment has been born of nearly three decades of battling migraine headaches that traditional remedies could not ease , he said.

Beta-blockers, antidepressants, and different narcotic medicines all failed, Smale said. He turned to marijuana in 2004. Now, through multiple daily doses of marijuana for which he has medical approval, Smale said, he can lower the intensity of his headaches from debilitating to moderate.

“It’s given me my life back,’’ said Smale, who worked as general manager at an Oakland, Calif., company that advised clients how to start marijuana dispensaries.

The use of marijuana for chronic medical conditions is increasing across the country. Maine, whose voters approved dispensaries in a 2009 binding referendum, is one of 15 states plus the District of Columbia that allow medical marijuana, and one of seven states where more than 1,000 dispensaries have opened or are being implemented. The remaining states where medical marijuana is legal are allowing patients or caregivers to grow their own.

Rhode Island, where caregivers can grow marijuana for registered patients, is the only other New England state to approve dispensaries. Health officials there are expected to choose among applicants for three centers by early spring, but the dispensaries would not open until later.

In Maine, each of the state’s eight public health districts will have one dispensary selected through competitive applications. If the Smales’ dispensary, which topped eight other applicants, is not the first to open, the center is expected to trail only a facility in far-north Aroostook County. No dispensaries are up and running east of Colorado, according to medical marijuana advocates.

Maine would appear to be a good fit for pharmacy-style distribution of marijuana. Its libertarian streak and homegrown cultivation of the plant, a rural practice often winked at here, make the transition to dispensaries almost unsurprising in a state where 60 percent of voters approved the move.

In a break from the state’s previous system, where only a doctor’s letter was sufficient to grow and use marijuana, Maine patients who wish to partake of medical marijuana must register with the state by Jan. 1 to do business with the nonprofit dispensaries and use the drug legally.

About 200 residents have been approved, and 200 more have applications pending, said John Thiele, the state’s medical marijuana program manager. Applicants must produce a doctor’s letter and pay a fee of $75 or $100, Thiele said.

Illnesses for which marijuana can be used in Maine include HIV, hepatitis C, cancer, Alzheimer’s, multiple sclerosis, and amyotrophic lateral sclerosis, also known as ALS or Lou Gehrig’s disease.

How the dispensaries obtain their initial seeds or plant grafts, Thiele said, is “almost a don’t ask, don’t tell thing.’’

Marijuana purchases, at an unregulated price that Jenna Smale said will be as low as possible, will be available to any Maine resident who has registered, complete with home delivery if needed. Insurance will not cover the transactions.

Despite his position as the Maine program’s top administrator, Thiele said he has some misgivings about the drug.

“I think it creates more problems than maybe it solves for society,’’ said Thiele. “But if my mother had ALS or Alzheimer’s, I would want my loved ones to be able to use the program’’ if marijuana proved to be beneficial.

Sharing those benefits has become the life work of the Smales, who added that the literal process of seeding his business has not been determined.

“How I start the product, I don’t know yet,’’ Tim Smale said.

In Auburn, a city of 23,000 where half of the state’s population lives within 40 miles, Mayor Richard Gleason welcomes the dispensary.

“Anything that brings commerce to Auburn and is legal is fine with me,’’ Gleason said.