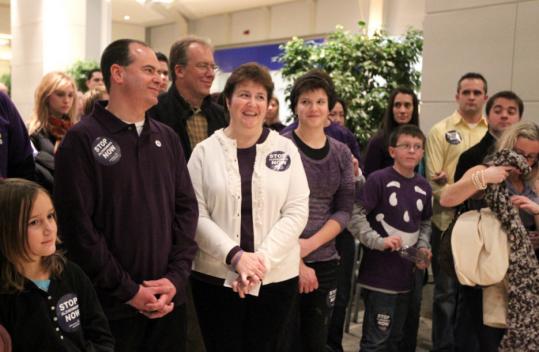 Second in a series of occasional articles about the Vincent family’s struggle with Alzheimer’s disease.

WESTMINSTER — Faith got Bruce Vincent through his first encounter with Alzheimer’s disease.

He was in ninth grade, his parents long divorced, and his mother was acting odd. Theresa Vincent would light a cigarette, put it down and light another. Or she would answer the phone, lay down the receiver, and forget someone had called.

Around this time, a friend invited Bruce Vincent to join the Royal Rangers, an Evangelical Christian boys organization. Amid his confusion, the teen found tranquility in the camping trips, camaraderie, and prayer.

That faith is now sustaining Vincent through his second experience with Alzheimer’s — his own. At 48, Vincent is the fourth generation of his family to battle a rare inherited form of the disease that strikes people early, usually in their 40s, and claims life about a decade later.

The role of faith in coping with Alzheimer’s disease has received little attention and has not been a significant focus of researchers. But that may be changing.

“It’s not really talked about that much because everyone feels uncomfortable, and everyone is trying to be politically correct,’’ said Paul Raia, vice president of clinical services for the Massachusetts and New Hampshire chapter of the Alzheimer’s Association.

Raia, who counsels families shortly after they receive an Alzheimer’s diagnosis, believes acknowledging and talking about spirituality can help. Yet too often, he said, pastors are missing from these early discussions.

“We see clergy involved in hospice at the end stage,’’ he said.

With science unable to provide answers for Alzheimer’s patients, spirituality provides an anchor for many, giving comfort and, as they withdraw from the outside world, helping them find joy in rituals shared with family and friends. The disease can also test their faith.

Raia is organizing a spring conference to bring together clergy members, social workers, nurses, and other caregivers to discuss spiritual aspects of the disease.

Olivia Ames Hoblitzelle, a Cambridge-based therapist and behavioral medicine teacher, discovered that there was very little said or written about spirituality and Alzheimer’s when she needed it most, in 1995, when her husband, Hob, a former literature professor at Brandeis and Columbia universities and a teacher of Buddhist meditation, was diagnosed.

“It’s all dealt with rather clinically, and yet it was the most important part of life for Hob and me. We were very interfaith in our approach to things spiritual,’’ Hoblitzelle said.

From the outset, the couple made a pact to negotiate his illness together, anchored by their Buddhist practices. Hoblitzelle sought guidance from a Tibetan teacher who, she said, helped her see that even the smallest of things, such as spoon-feeding her husband in his dying days, was a kindness infused with spirituality that cut across all faiths and illness.

“Even when the mind goes, there is feeling,’’ Hoblitzelle said. “You can reach someone with love. They might not respond, but it’s really about the heart.’’

Hob died in 2001, and his wife later self-published a book about their experience that became so popular that it was picked up by Tarcher/Penguin and reissued this year under a new title, “Ten Thousand Joys and Ten Thousand Sorrows: A Couple’s Journey Through Alzheimer’s.’’ Among those who offered praise on the book’s jacket was the Dalai Lama.

Raia, from the Alzheimer’s Association, similarly talks to newly diagnosed patients and their primary caregivers about forming a “karmic bond’’ to go through Alzheimer’s together. The disease can be life-sapping, he tells them, but Alzheimer’s can also reveal many life-strengthening moments.

“I see many remarkable love stories in progress,’’ he said.

He tells one about a 94-year-old man named Peter who cared for his 93-year-old wife, Celeste, in the later stages of the disease. The two met in the first grade, married as teenagers, and raised five children. Celeste had lost many abilities but still delighted in watching the birds drawn to 20 feeders atop tall poles in her backyard.

Each morning Peter hobbled from pole to pole with a crutch and a cane, and a bag of seed around his neck. He would slowly climb a rickety ladder to fill each feeder. Raia said that when he asked Peter why he didn’t let one of his children do that daily chore, he told him, “Celeste’s joy in watching those birds is the gift that she gives to me.’’

“We know the importance now of spending time together,’’ said Cindy Vincent, Bruce’s high-school sweetheart and wife of 29 years. The couple has three children, all in their 20s, who have a 50-50 chance that they inherited from their father a gene that causes early-onset Alzheimer’s.

The eldest, Jeff Vincent, a 27-year-old Holden police officer, keeps a Monday night date with his dad for their volleyball league. Jeff’s wife, Rebecca, hosts the family for dinner before the games.

“Bruce’s lead, his calm, and his strength sets the pace for the rest of us,’’ Rebecca Vincent said. “Instead of crying, we spend more time now laughing.’’

Cindy Vincent was asked by the Alzheimer’s Association to speak at a holiday gathering two weeks ago to raise public awareness.

“This disease,’’ she told the gathering at the Prudential Center in Boston, “has robbed our family of a future we once took for granted.’’ The true spirit of the holidays, she added, is about “caring, sharing, family, and friends.’’

Later, Brian Vincent, the couple’s 26-year-old son who has taken over management of the family’s Westminster grocery store from his father, confided that his faith has hit some “troubled waters,’’ mostly due to Alzheimer’s.

He said his father has long been his spiritual role model, the one who read his children bedtime stories from the Bible and who insisted they attend a Christian high school. Those lessons, Brian Vincent said, helped teach him right from wrong and how to treat people fairly.

Which is why, he said, he is now churning.

“I often wonder how a God of love and peace could create such a terrible disease such as Alzheimer’s, without a cure,’’ he said. “A problem without a solution. It doesn’t make sense to me how an amazing person like my father has to be struck down at such an early age.’’

His father holds no such doubts. In the two years since his diagnosis, Bruce Vincent has forgotten some things he has long known — how to read a digital clock and how to run the cash register at the family store.

But waiting for church to begin on a recent Sunday morning, he recited, without hesitation, one of the earliest Bible verses he learned at the Royal Rangers — about eternal life for those who believe.

“The presence of God,’’ he said later, “is like a low-level current, it’s a tingle that goes through your body.’’

Alzheimer’s does not frighten him.