Transformers: From four wheels to two

Matt Marx, 41, an assistant professor at the MIT Sloan School of Management, reworked his commute from Westwood.

As told to Amy Sutherland

I had been a doctoral student at Harvard, which isn’t too bad to drive to, but the stretch from the Allston tolls to MIT added a half-hour in rush-hour traffic. I couldn’t drive that every day.

I started driving to the commuter rail to take the train, but it cost $5 a day to park. So I bought a bike to ride to the train station. After a couple of months, the bike had paid for itself. I was excited, because I’m pretty cheap.

Then in early 2010, I drove halfway, to Adams Park in Roslindale, parked in a Staples lot, and rode in. I was shocked I made it. Next, I tried riding the whole way, 13 to 14 miles one way. Then I started riding in every day.

I’ve lost 40 pounds, but I could stand to lose another 40. I also have much more stamina. I never had done anything athletic – I was cut from the JV basketball team in high school. This is the first thing I’ve done, and I’m actually pretty good at it.

It also saves a lot of money, probably a few hundred dollars a month in gas, tolls, and parking. It’s also two hours a day my cellphone doesn’t ring and no e-mail.

And I’ve met a lot of people. It’s amazing how many people see my bike and strike up a conversation. Most drivers have been nice to me. I don’t know whether they look at the big guy on the little bike and take pity on me. 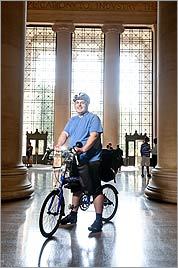