Masha Traber would prefer to use her electric scooter to tool around the Lexington area for work during the summer, but because of its short range and lack of charging stations, she often has to resort to using her car for longer trips.

So she was the ideal audience for an event state officials held yesterday on Lexington’s Battle Green to debut the new electric vehicle charging stations to be installed around the state, including three in her town.

“I’m totally excited about the new stations because they will expand my ability to ride to Cambridge,’’ Traber said.

Massachusetts officials hope the new charging outlets, 142 stations in 25 communities statewide, will not only make driving more convenient for existing electric-vehicle owners, but will compel other consumers to help the environment by buying them, too.

Most of the stations will be in common commuter or traveler spots - downtown parking areas or garages, MBTA lots, schools, businesses, or shopping malls - and will be owned and operated by municipalities on public land, and by property owners on private land, who will set rates for recharging.

The charging stations are chest-high boxes that can be placed in front of a parking space. The new Chevrolet Volt takes four to five hours to fully charge at these stations and has a 40-mile range.

Many of the stations will be part of ChargePoint Network, run by California-based station maker Coulomb Technologies Inc. and partially funded by the Department of Energy.

Drivers can access the network via a mobile app or its website, mychargepoint.net, to search for a charging station and make reservations.

The charging stations cost as much as $5,500, but most of them will be funded by the ChargePoint Venture and will be installed by the end of the year.

The remaining 37 stations will be funded by a $280,000 settlement in a pollution case that Attorney General Martha Coakley’s office obtained in 2007. The state put out a request for proposals on those stations, which are also expected to be installed by the end of the year, said Maeve Bartlett, state assistant transportation secretary.

With the popularity of the Prius, the debut of the Volt, and pending release of electric vehicles from BMW and , Bartlett said Massachusetts needed to ratchet up its available charging stations.

“We want to have a public investment so that once these vehicles come on the market, it’s going to be easy for people to find a charging station - it’s not going to be an impossibility,’’ Bartlett said. “We want a rollout of electric vehicles to be successful, and publicly available charging stations can enable that.’’ 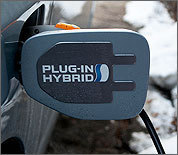