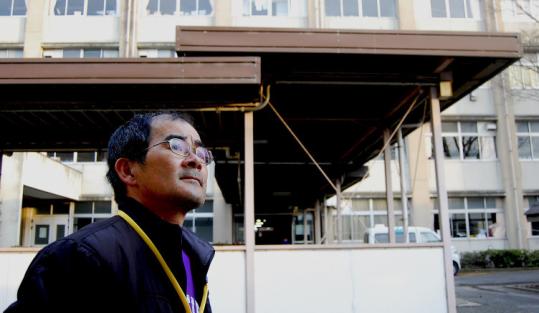 “What are you saying? Don’t you know a tsunami is coming?” said Masayuki Ishizawa, talking about what he shouted at a guard while trying to flee the Fukushima Daiichi nuclear plant, where he worked. (Moshe Komata/ New York Times)
By Hiroko Tabuchi New York Times / April 10, 2011

KAZO, Japan — The ground started to buck at the Fukushima Daiichi nuclear power plant, and Masayuki Ishizawa could scarcely stay on his feet. Helmet in hand, he ran from a workers’ standby room outside the plant’s No. 3 reactor, near where he and a group of workers had been doing repair work. He saw a chimney and crane swaying like weeds. Everybody was shouting in a panic, he recalled.

Ishizawa, 55, raced to the plant’s central gate. But a security guard would not let him out of the complex. A long line of cars had formed at the gate, and some drivers were blaring their horns.

“Show me your IDs,’’ Ishizawa remembered the guard saying, insisting that he follow the correct sign-out procedure. And where, the guard demanded, were his supervisors?

“What are you saying?’’ Ishizawa said he shouted at the guard. He looked over his shoulder and saw a dark shadow on the horizon, out at sea, he said.

He shouted again: “Don’t you know a tsunami is coming?’’

Ishizawa, who was finally allowed to leave, is not a nuclear specialist; he is not even an employee of the Tokyo Electric Power Co., the operator of the crippled plant. He is one of thousands of untrained, itinerant, temporary laborers who handle the bulk of the dangerous work at nuclear power plants here and in other countries, lured by the higher wages offered for working with radiation.

Collectively, these contractors were exposed to levels of radiation about 16 times as high as the levels faced by Tokyo Electric employees last year, according to Japan’s Nuclear and Industrial Safety Agency. These workers remain vital to efforts to contain the nuclear crisis at the Fukushima nuclear plants.

They are emblematic of Japan’s two-tiered workforce, with an elite class of highly paid employees at top companies and a subclass of laborers who work for less pay, have less job security, and receive fewer benefits. Such labor practices have both endangered the health of these workers and undermined safety at Japan’s 55 nuclear reactors, critics charge.

“This is the hidden world of nuclear power,’’ said Yuko Fujita, a former physics professor at Keio University in Tokyo and a longtime campaigner for improved labor conditions in the nuclear industry. “Wherever there are hazardous conditions, these laborers are told to go. It is dangerous for them, and it is dangerous for nuclear safety.’’

Of roughly 83,000 workers at Japan’s 18 commercial nuclear power plants, 88 percent were contract workers in the year that ended in March 2010, the nuclear agency said. At the Fukushima Daiichi plant, 89 percent of the 10,303 workers during that period were contractors.

In Japan’s nuclear industry, the elites are operators like Tokyo Electric and the manufacturers that build and help maintain the plants, like and . But under those companies are contractors, subcontractors, and sub-subcontractors — with wages, benefits, and protection against radiation dwindling with each step down the ladder.

Interviews with about a half-dozen past and current workers at Fukushima Daiichi and other plants paint a bleak picture of workers on the nuclear circuit: battling intense heat as they clean radiation from the reactors’ drywells and spent-fuel pools using mops and rags, clearing the way for inspectors, technicians, and Tokyo Electric employees, and working in the cold to fill drums with contaminated waste.

Some workers are hired from construction sites, and some are local farmers looking for extra income. They spoke of the constant fear of getting fired, trying to hide injuries to avoid trouble for their employers.

Most day workers were evacuated from Fukushima Daiichi after the March 11 earthquake and tsunami, which knocked out the plant’s power and pushed some of the reactors to the brink of a partial meltdown.

Since then, those who have returned have been shielded from the media; many are housed at a staging ground for workers that is off limits to reporters. But there have been signs that such laborers continue to play a big role at the crippled power plant.

Day laborers are being lured back to the plant by wages that have increased along with the risks. Ishizawa, whose home is about a mile from the plant and who evacuated the day after the quake, said he was called last week by a former employer who offered daily wages of about $350 for just two hours of work at the Fukushima Daiichi plant — more than twice his previous pay.

Some former members of his team have been offered nearly $1,000 a day. Offers have fluctuated depending on the progress at the plant and the perceived radiation risks that day. So far, Ishizawa has refused to return.