For Japan, Chernobyl may hint at future 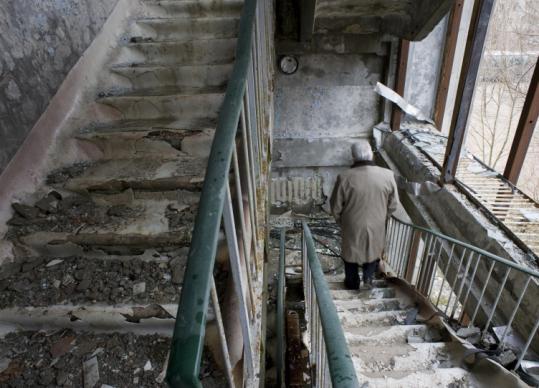 The town of Pripyat, Ukraine, a former dormitory city for Chernobyl workers who were evacuated after the nuclear plant’s 1986 explosion, is now a mostly abandoned area. (Nikki Kahn/ Washington Post)
By Will Englund Washington Post / April 10, 2011

The explosion that struck 25 years ago, in the world’s worst nuclear accident, set in motion a major undertaking that today bears on the life of the entire country. It is a model, or a warning, for what could await Japan. The crisis at the Fukushima nuclear plant will at some point be contained — but then there begins a national project from which there is no exit strategy.

Though the turbines are still, and cranes dangle above two unfinished reactors, just as they have for the past 25 years, too radioactive to be moved anywhere else, this is not a ghost town. Trains arrive on freshly laid tracks, workshops dot the grounds, and steam billows from the chimney of a new gas-fired heating plant that sends hot water throughout the complex.

About 3,000 people work here, in decontaminated areas, maintaining and decommissioning the plant. An additional 4,000 work nearby, providing security in the 19-mile-deep exclusion zone — from which residents were evacuated and where entry is possible only with a permit. Exclusion zone workers also handle water-management and forest-fire-suppression duties, part of the ongoing effort to keep contamination from spreading.

And beyond the exclusion zone lies the vast social structure of evacuees, former emergency workers and their families, farmers whose dwindling villages are contaminated but habitable — survivors battling the government for the care and assistance they believe they deserve.

Even if the scope of contamination is smaller, Fukushima will demand of the Japanese a commitment of unforeseeable dimensions.

“My wife told me, you know the sarcophagus better than you know your own apartment,’’ said Grigory Panchuk, who once maintained the tomb encasing Reactor 4. Retired now, he lives in Slavutych, where residents commute by train to the power station.

At 60, Panchuk is unable to work because of poor health, he hasn’t received the full pension he is entitled to as a Chernobyl veteran with a related disability, thyroid disease. So like thousands of others, he is going to court to try to make the government pay what it owes him.

The government fights these cases. It says it has no money. About 130,000 people were evacuated from the exclusion zone, and they are entitled, in theory, to an array of benefits.

Even if money were not an issue, other realities would be the same. Definitions have to be drawn up, medical examinations pursued, year after year, and distinctions made between the natural effects of aging and the consequences of radiation exposure. The worst issues don’t necessarily appear right away: The steepest rise in thyroid cancer in neighboring Belarus came nearly two decades after the explosion.

Maria Krivolapova, 61, worked near Chernobyl. Her husband, Mikhail, was at the power station. After the accident, she loaded sand into helicopters that were trying to put out the fire. After eight days, they were ordered to evacuate.

Mikhail died of lung cancer 13 years ago. Her daughter, Yelena, who was 13 in 1986, has a vascular disease that was only recently affirmed as Chernobyl-related.

Maria has thyroid disease, heart disease, and high blood pressure. She said she was diagnosed with radiation sickness in June 1986. She doesn’t know how much of a pension she is supposed to receive, but she knows she isn’t receiving it.