But hurricane forces a halt to gulf cleanup 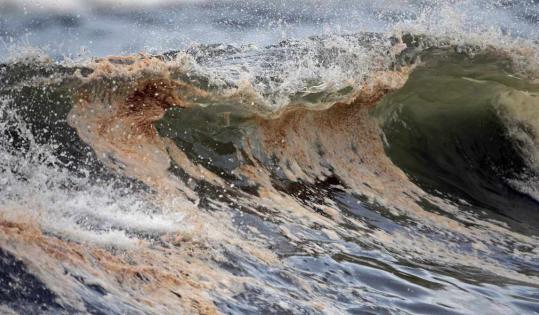 The Taiwanese-flagged former tanker named A Whale is the length of 3 1/2 football fields and stands 10 stories high. It just emerged from an extensive retrofitting to prepare it specifically for the gulf, where officials hope it will be able to suck up as much as 21 million gallons of oil-fouled water per day.

As the monstrous vessel made its way toward the Gulf Coast, large waves churned up by distant Hurricane Alex left Alabama beaches splattered with oil and tar balls the size of apples. The rough seas forced most smaller skimming boats into port for a second consecutive day, putting many cleanup crews at a standstill.

The hurricane crashed into Mexico’s Gulf Coast as a powerful Category 2 storm last night, spawning tornadoes in nearby Texas and forcing evacuations in both countries. The US National Hurricane Center said Alex, with winds of about 110 miles per hour, made landfall at a relatively unpopulated stretch of coast in Mexico’s northern Tamaulipas state about 110 miles south of Brownsville, Texas, and was pushing inland at 10 miles per hour.

The civil defense office in Matamoros, across the border from Brownsville, said Alex’s rains had already flooded around 30 neighborhoods there and officials were using small boats to rescue some residents.

Alex spawned two tornadoes around Brownsville, including one that flipped over a trailer. No injuries were reported.

Oil rigs and platforms in the path of the storm’s outer bands were evacuated, but none were part of the gulf oil spill response.

The giant oil-skimming ship, which was expected to arrive by today, looks like a typical tanker, but it takes in contaminated water through 12 vents. The oil is then supposed to be separated from the water and transferred to another vessel. The water is channeled back into the sea.

But the ship has never been tested, and many questions remain about how it will operate. For instance, the seawater retains trace amounts of oil even after getting filtered, so the Environmental Protection Agency will have to sign off on allowing the treated water back into the gulf.

The vessel, owned by the Taiwanese shipping firm TMT Group, was completed as a tanker earlier this year in South Korea. But after the gulf spill, the company’s chief executive and founder, Nobu Su, ordered it changed into a giant skimmer.

TMT officials, who hoped to see the ship in Louisiana coastal waters yesterday, planned to meet with the Coast Guard to plan a tryout of the ship. The Coast Guard will have the final say in whether the vessel can operate in the gulf. TMT will have to come to separate terms with , which is paying for the cleanup.

Yesterday, along parts of the gulf, red flags snapped in strong gusts, warning people to stay out of the water, and long stretches of beach were stained brown from tar balls and crude oil that had been pushed as far as 60 yards up on shore.

Oil deposits appeared worse than in past days, and local officials feared the temporary halt to skimming operations near the coast would only make matters worse ahead of the July Fourth holiday weekend.

“I’m real worried about what is going to happen with those boats not running. It can’t help,’’ said Tony Kennon, mayor of Orange Beach, Ala.

As of yesterday, between 71.2 million and 139 million gallons of oil have gushed into the Gulf of Mexico from the leak caused by the April 20 explosion aboard the drilling rig Deepwater Horizon that killed 11 oil workers.

Although skimming operations and the laying of oil-corralling booms were suspended across the gulf, vessels that collect and burn oil and gas at the site of the explosion were still operating. Efforts to drill relief wells that specialists hope will stop the leak also continued unabated.