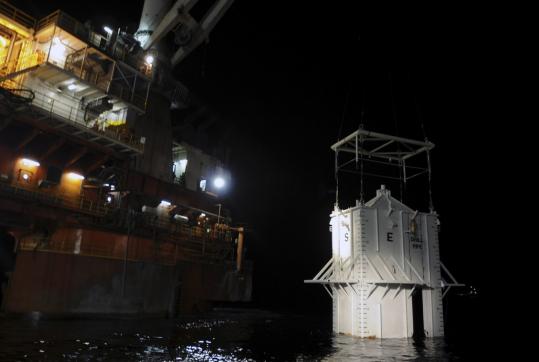 A four-story chamber, shown Thursday, was lowered to the bottom of the ruptured oil well in the Gulf of Mexico yesterday. The chamber has to settle for at least 12 hours before it can be hooked up in an attempt to capture most of the leaking oil. (Petty Officer Third Class Patrick Kelley/Coast Guard/Reuters)
By Harry R. Weber Associated Press / May 8, 2010

ON THE GULF OF MEXICO — A -chartered vessel lowered a 100-ton concrete-and-steel vault onto a ruptured well in the Gulf of Mexico yesterday, an important step in a delicate attempt to stop most of the gushing crude fouling the sea.

Underwater robots guided the 40-foot-tall box into place. Now that the contraption is on the sea floor, workers will need at least 12 hours to let it settle and make sure it’s stable before the robots can hook up a pipe and hose that will funnel the oil up to a tanker.

“It appears to be going exactly as we hoped,’’ BP spokesman Bill Salvin told the Associated Press yesterday afternoon, shortly after the four-story device hit the sea floor. “Still lots of challenges ahead, but this is very good progress.’’

By tomorrow, the box the size of a house could be capturing as much as 85 percent of the oil. So far about 3 million gallons have leaked in an environmental crisis that has been unfolding since a deepwater drilling platform exploded April 20, sending toxic oil toward a shoreline of marshes, shipping channels, fishing grounds, and beaches. Eleven workers were killed in the accident.

The deadly blowout was triggered by a bubble of methane gas that escaped from the well and shot up the drill column, expanding quickly as it burst through several seals and barriers before exploding, according to interviews with rig workers conducted during BP’s internal investigation.

Seven BP executives were on board the Deepwater Horizon rig celebrating the project’s safety record, according transcripts, which were described in detail to an Associated Press reporter by an engineering professor who received them from industry friends seeking his expert opinion. Meanwhile, far below, the rig was being converted from an exploration well to a production well. As the workers removed pressure from the drilling column and introduced heat to set the cement seal around the wellhead, the chemical reaction created heat, destabilizing the seal and allowing a gas bubble to form inside the pipe.

The executives were injured but survived a series of explosions, according to an account.

The lowering of the containment device was a slow-moving drama playing out 50 miles from Louisiana’s coast, requiring great precision and attention to detail. It took about two weeks to build the 40-foot box, and the effort to lower it by crane and cable to the seafloor began late Thursday night. After it hit bottom yesterday afternoon, the crane gradually eased off to allow it to settle.

“We are essentially taking a four-story building and lowering it 5,000 feet and setting it on the head of a pin,’’ Salvin said.

The task became increasingly urgent as toxic oil crept deeper into the bays and marshes of the Mississippi Delta.

A sheen of oil began arriving on land last week, and crews have been putting out floating barriers, spraying chemical dispersants, and setting fire to the slick to try to keep it from coming ashore. But now the thicker, stickier goo — arrayed in vivid, brick-colored ribbons — is drawing ever closer to Louisiana’s coastal communities.

There are still untold risks and unknowns with the containment box: The approach has never been tried at such depths, where the water pressure is enough to crush a submarine, and any wrong move could damage the leaking pipe and make the problem worse. The sea floor is pitch black and the water murky, though lights on the robots illuminate the area where they are working. If the box works, another one will be dropped onto a second, smaller leak at the bottom of the Gulf.

At the same time, crews are drilling sideways into the well in hopes of plugging it up with mud and concrete, and they are working on other ways to cap it.

The well has been spewing about 200,000 gallons a day in the nation’s biggest oil spill since the nearly 11 million gallons lost in the Valdez disaster in Alaska in 1989.

At Hopedale, a fishing community in St. Bernard Parish, La., that has been a staging area for efforts to protect inlets and bayous, Louisiana Governor Bobby Jindal stepped out of a helicopter and held aloft a tennis ball-size hunk of tarry oil he said a fisherman had retrieved near the mouth of the Mississippi River.

Oil was reported moving west of the Mississippi toward villages on the Louisiana coast.

BP’s planned destination for recovered oil — its refinery in Texas City, Texas — has a checkered history. An explosion there in 2005 killed 15 people. Regulators last October hit BP with a $87 million fine for safety violations.