Cape Wind has its 1st buyer 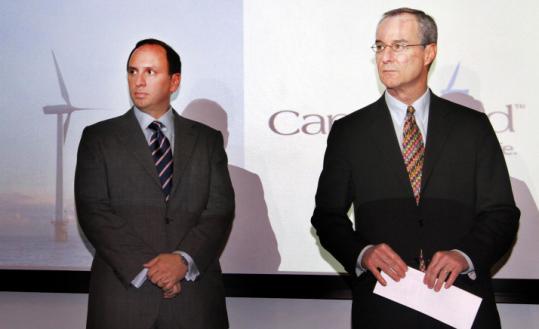 Cape Wind, the controversial wind farm proposed for Nantucket Sound, has signed its first deal to sell power: a 15-year contract with local utility National Grid, at a price that will add $1.59 a month to the average customer’s bill in its first year. The contract, which includes a 3.5 percent annual price increase, will be submitted on Monday to the Massachusetts Department of Public Utilities for approval.

Cape Wind Associates president Jim Gordon said the contract “helps put Massachusetts at the forefront of this emerging industry, and provides their customers with secure and stable-priced renewable energy.’’

But Robert Rio, senior vice president of Associated Industries of Massachusetts Inc., said that power from the Cape Wind project costs too much, and will only become more expensive over time. “This thing is a burden on ratepayers for 15 years,’’ Rio said.

The Cape Wind project is planned to begin generating power in 2013, although it still faces strong opposition. National Grid has agreed to buy 50 percent of the power it generates at a price of 20.7 cents per kilowatt hour — substantially more than the cost of electricity from conventional power plants.

Massachusetts consumers pay some of the highest rates for electricity in the nation. The price for the electricity alone is about 9 cents per kilowatt hour, and customers also pay a number of other charges. State law requires utilities to purchase a percentage of their power from renewable sources like wind farms or hydroelectric plants.

The utilities must also pay an extra 6.1 cents per kilowatt hour for such power, in effect subsidizing renewable energy providers. The price agreed to by National Grid includes the extra fee. In addition, National Grid agreed to the 3.5 percent annual increase for the life of the contract to adjust for inflation.

Massachusetts Energy and Environmental Secretary Ian Bowles said that the price of wind energy promises to be more stable than the cost of power generated by natural gas. He said rising natural gas prices prompted a tripling of electricity prices in the state over the past decade.

“I’m confident that over the life of the contract, the Cape Wind project will save money for Massachusetts customers,’’ he said.

But Audra Parker, president of the Alliance to Protect Nantucket Sound in Hyannis, disputed that. Parker said, the Cape Wind contract will cost National Grid customers $442 million in higher electric bills over the 15-year life of the contract.

The deal makes National Grid the first utility to sign a contract with Cape Wind, an important step. The wind farm will cost an estimated $1 billion to build, and a paying customer in hand will help lock down the financing.

Cape Wind plans to generate up to 468 megawatts of electricity from 130 wind turbines.

First proposed nine years ago, the Cape Wind project has been delayed by intense opposition from residents of Nantucket and Cape Cod, who say the giant windmills will ruin the natural beauty of the region.

The contract with National Grid accounts for only half of Cape Wind’s power output. Cape Wind spokesman Mark Rodgers said the company is in talks with other potential customers, including other electric utilities.

“We have been approached by many different kinds of entities about buying this power,’’ said Rodgers, but he declined to offer more detail.