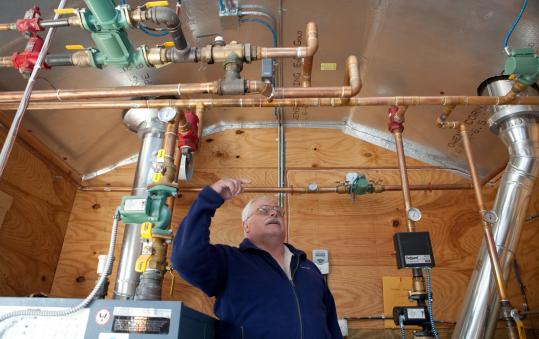 Skip Dunnell at Sandri Cos. with a wood pellet heating system, which the Greenfield firm offers as a cheap renewable alternative to oil. (Matthew Cavanaugh for The Boston Globe)
By Aubin Tyler Globe Correspondent / April 27, 2010

GREENFIELD — For someone who traffics in petroleum, Timothy Van Epps is doing everything he can to put his company out of that business.

Van Epps is president of Sandri Cos., an 80-year-old fuel oil company that is on a multimillion-dollar mission to convert heating customers to a common and cheap renewable resource: wood pellets.

In March Sandri received $3.2 million in federal stimulus funds to help commercial and institutional clients in Western Massachusetts replace petroleum-based heating systems with boilers that burn wood pellets. The pellet boilers have efficiency rates that rival the best of natural gas and oil boilers but are cheaper to operate. Best of all, they use an easy-to-replenish fuel source: sawdust and leftover chips from sawmills and other wood processing operations.

Sandri has gone full throttle into the green movement, with a 25-ton pellet silo and pellet boiler to fire the hot water it uses to wash its 60 fuel delivery trucks, and plans to install a solar array on the roof of its Greenfield headquarters.

“We’re trying to get renewables into the DNA of the company,’’ Van Epps said.

In selecting Sandri, Massachusetts energy officials were convinced the company had the wherewithal and infrastructure “to make a go of it’’ and bring wood pellet technology to a wider audience, said Dwayne Breger, who runs the renewable energy division at the Massachusetts Department of Energy Resources.

Next month Sandri will install its first commercial-sized pellet boilers at Greenfield Community College, the Greenfield Fire Department, and a half-dozen other commercial sites in the area. The cost for a large-scale system can range from $40,000 to $600,000 for a big high school. Efficiency rates run from 85 to near 95 percent, making them as efficient as the best natural gas systems available on the market.

For homeowners, Sandri is using the stimulus funds to develop a pilot project that will offer 250 energy audits, weatherize 75 homes, and install 25 pellet boiler systems — plus $5,000 in rebates toward the purchase of ultra-low-emission pellet boilers.

Home systems can run from $6,500 to $10,000 or more. Sandri would also be the supplier and service provider of the wood pellets and the boiler systems. The pellets are small enough that they can be delivered by truck using a hose system, just like oil.

Home systems typically require a basement pellet bin or outdoor silo; a 4-foot-by-10-foot cloth bin holds about 5 tons of pellets. One ton is equivalent to about 125 gallons of heating oil. So with the average winter heating oil use in Massachusetts at about 900 gallons, homeowners would probably go through 7 or 8 tons of pellets in a normal winter.

The city of Gardiner, Maine, elected to go with top-of-the-line commercial pellet boilers from Okofen last year to replace an old oil boiler system in its public works building

Although the two boilers had high up-front costs — $69,427 — the system is expected to yield considerable savings; already in this current fiscal year, Applebee noted that oil prices have gone up 14 percent, while pellets have remained stable.

The pellet boilers are much more popular in Europe, and one of the major manufacturers is Austrian-based Okofen. Its US distributor is Maine Energy Systems. Mike Broderick, chief operating officer, said the cost of an Okofen unit sufficient to heat a 2,500- to 3,000-square-foot home can range from $10,000 to about $16,000 for a fully automated system.

The systems’ pollution profile is evolving. For example, the boilers’ carbon emissions can be neutralized by the growth of new tress that capture carbon. However, the process of “resequestering’’ carbon, as it’s known, can take years.

So the state energy office is trying to find out how long it takes for pellet boilers to become carbon neutral. That is one of the questions to be tackled in a new study of the environmental consequences of biomass fuels the department has commissioned from Manomet Center for Conservation Sciences in Manomet, Mass.

“There’s still carbon coming from stack,’’ said Breger, of the state renewable energy division. “The issue is, at what rate; over what time frame can we wait for carbon to be re-sequestered?’’

Another concern is whether pellet boilers will encourage depletion of forest resources. Those same worries are fueling opposition in Western Massachusetts to several proposed wood-fired power plants.

Just last week Governor Deval Patrick dramatically increased the amount of state forests that will be off limits to logging, which provides a feed source for the wood pellets. Breger said the study will also look at how much pellet burning the region’s wood-processing operations can support.

“We need to know what scale is appropriate in terms of available forest resources and make sure that it’s sustainable,’’ Breger said.

Unlike those that use fossil fuels, pellet systems do not emit sulfur dioxide. They do emit more fine particles, or particulate matter, than conventional heating systems, but less than wood stoves. Particulate matter can contribute to asthma and respiratory problems.

But Breger said the technology is improving so fast that the systems are fast approaching levels of oil-fired boilers.