A decision in sight on Cape Wind dispute 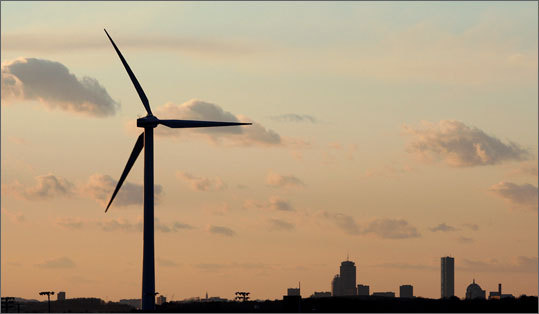 (Stephan Savoia/AP) In this Feb. 24, 2006 file photo, a wind turbine stands generating power next to Hull High School in the shadow of Boston.
By Beth Daley Globe Staff / January 5, 2010

The Obama administration signaled a sudden urgency yesterday to resolve the nine-year dispute over building a wind farm off Cape Cod, as US Interior Secretary Ken Salazar announced he would summon key parties to a meeting next week in hope of concluding the decision process within two months.

The announcement was made minutes after the Cape Wind project appeared to suffer an unexpected setback, when the National Park Service agreed with two Native American tribes that Nantucket Sound is eligible to be listed on the National Register of Historic Places because of its cultural and spiritual significance to the tribes.

The decision caught many by surprise, because listing in the Register, which affords extra protection against development, is normally reserved for structures or smaller, more specific locations.

Native Americans’ pursuit of the historic designation is the last outstanding major issue before Cape Wind Associates can begin construction in the Sound. The Park Service’s decision threatened to further delay a glacial review process for the 130-turbine wind farm.

But in a written statement, Salazar directed that “principal parties’’ meet next week, probably in Washington, to come up with a “common-sense agreement’’ by March 1 on ways to minimize the project’s impact on the sound’s cultural and historic value. Barring an agreement, the interior secretary said, “I will be prepared to take the steps necessary to bring the permit process to conclusion.’’

Salazar did not detail what those steps might be. He oversees the Park Service, and although it is unlikely he would overrule its eligibility determination, he could orchestrate a compromise all parties would have to accept.

An Interior Department spokeswoman said the date and exactly who would be attending were still to be determined. However, it is expected that Cape Wind developers and state historic preservation officials would be included.

Salazar’s intervention in the heated battle over the Cape Wind project reflects the Obama administration’s intensified interest in the fate of the nation’s first proposed offshore wind farm after more than a year of silence on it. The administration, smarting from disappointing international climate talks in Copenhagen and the failure of Congress to pass legislation to reduce greenhouse gas emissions, is eager, some observers say, to show the world that it is serious about switching to a lower-carbon economy.

“There is a renewed sense of urgency to address climate change in the wake of Copenhagen and the need for real action on the ground or on the water, in this case,’’ said Sue Reid of the Conservation Law Foundation, a Boston-based advocacy group.

Governor Deval Patrick hailed Salazar’s involvement, saying in a statement, “I’m pleased that Secretary Salazar is personally convening the parties next week to address any potential historic impacts of the Cape Wind Project. The decision by the [National Park Service] is unfortunate, but should not be an obstacle to this vital clean energy project moving forward.’’

The Wampanoag tribes of Aquinnah and Mashpee have said for years that the Cape Wind project would disturb their spiritual sun greetings and submerged ancestral burying grounds in Nantucket Sound. While the federal agency in charge of issuing permits for the wind farm had said the sound was not eligible to be listed in the Register, the Massachusetts Historic Preservation Officer had decided otherwise, leaving the matter in the hands of the Park Service.

The National Park Service was expected to dismiss the sound as ineligible for listing because there was no specific property associated with the determination and the service says it discourages the nomination of natural bodies of water. But in a seven-page explanation of the determination, Park Service officials said Nantucket Sound was unusual because it was dry land before sea levels slowly rose after the last ice age, and it was clear that Native Americans had lived there at that time and probably on more elevated lands that were exposed longer, such as Horseshoe Shoals where the Cape Wind project is proposed.

“Based on multiple sources of evidence, the sound is part of a larger, culturally significant landscape treasured by the Wampanoag tribes and inseparably associated with their history and traditional cultural practices and beliefs, as well as with the Native American exploration and settlement of Cape Cod and the Islands,’’ the Park Service document says.

Cedric Cromwell, Mashpee Wampanoag Tribe chairman, said in a statement that the decision “confirms what the Wampanoag people have known for thousands of years, that Nantucket Sound has significant archeological, historic, and cultural values and is sacred to our people.’’

Proponents of the Cape Wind project, however, see the tribes’ actions as a delaying tactic orchestrated in part by the Alliance to Protect Nantucket Sound, the main opposition group to the wind farm, which has worked with the tribes. But the tribes have vehemently denied that the alliance did anything but join with them in a like-minded cause, although for different reasons, to have the project moved farther off shore or elsewhere.

Dennis Duffy, vice president of Cape Wind Associates, said he was encouraged by Salazar’s involvement because “for the first time after all these years there is a definite decision date on the calendar.’’

The news is the latest and probably the most significant twist in the Cape Wind saga, which has undergone years of environmental review and political maneuvering, including opposition from the late Senator Edward M. Kennedy, whose home overlooked Nantucket Sound. While opponents’ main concern is aesthetics - the turbines would be visible on the horizon from the Cape and Islands - the battle was fought by raising other issues, including property values and harm to birds, fishing, aviation, and historic and cultural sites.

“It’s a tough election year for the governor,’’ said Jack Clarke, a Masssachusetts Audubon Society public policy specialist. He said Salazar’s decision will have ramifications across the country because if Nantucket Sound is placed on the National Register, other federal bodies of waters can be, too, potentially slowing offshore renewable development.