Rally to pressure negotiators in Copenhagen 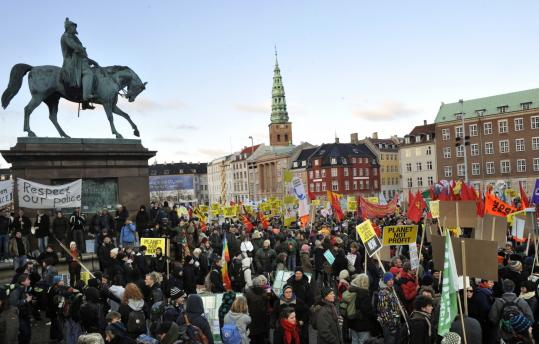 Demonstrators converged on Copenhagen to turn up the heat on world leaders debating global warming at the UN climate conference. While the protest was largely peaceful yesterday, more than 900 arrests were made. (Attila Kisbenedek/AFP/Getty Images)
By Beth Daley Globe Staff / December 13, 2009

COPENHAGEN - A pulsating wave of humanity, tens of thousands strong, amassed in this frigid capital city yesterday to urge world leaders to resolve their remaining differences and strike an international climate deal this week.

While the protesters marched with banners, signs, and flags, some said they were just carrying hope that differences among the 192 nations gathered here over firm emission targets and financing could be negotiated down into a meaningful document when heads of states begin to arrive.

Crowd estimates differed widely, with police saying upward of 30,000 protesters showed up and organizers claiming 100,000. While the protest was largely peaceful, more than 900 arrests were made, some for isolated violence and some in what police described as preventative action.

Hours before the 4-mile walk began, protesters began gathering with blue ponchos, floats, signs, music - and gas masks (to protest nuclear power). Families with children and people from literally every corner of the globe spent the next four hours chatting, chanting, and singing about issues ranging from climate justice to going vegetarian to stop energy-intensive meat production.

“I go to a lot of protests and sometimes, they can be disempowering and even boring,’’ said Eleanor Smith, 23, of London who attended the march and works for Friends of the Earth. “But the music, the levels of people, the chanting . . . it was all very inspiring.’’

Initial reaction to the negotiating text submitted Friday underscored the split between the US-led wealthy countries and countries still struggling to overcome poverty and catch up with the modern world.

The tightly focused document was meant to lay out the crunch themes for environment ministers to wrestle with as they prepare for a summit of some 110 heads of state and government.

US delegate Jonathan Pershing said the draft failed to address the contentious issue of carbon emissions by emerging economies.

“The current draft didn’t work in terms of where it is headed,’’ Pershing said in the plenary, supported by the European Union, Japan, and Norway.

But the EU also directed criticism at the United States, insisting it could make greater commitments to push the talks forward without stretching the legislation pending in Congress. Both the United States and China should be legally bound to keep whatever promises they make, said Swedish Environment Minister Anders Carlgren.

China has made voluntary commitments to rein in its carbon emissions but doesn’t want to be bound by international law to do so. In China’s view, the United States and other rich countries have a heavy historical responsibility to cut emissions and any climate deal in Copenhagen should take into account a country’s level of development.

Delegates at the conference center gathered around flat-screen TVs to watch live footage showing riot police rounding up small groups of young people dressed in black from the back of the demonstration and tying their hands with plastic wrist restraints.

Environmental activists also rallied elsewhere in Europe and in Asia to increase the pressure on climate negotiators in Copenhagen.

Thousands marched in a “Walk Against Warming’’ in major cities across Australia and about 200 Filipino activists staged a festive rally in Manila to mark the Global Day of Action on climate change. Dozens of Indonesian environmental activists rallied in front of the US Embassy in Jakarta.

Thousands of environmentalists staged stunts and protests in 100 piazzas across Italy, from Venice’s St. Mark’s Square to a historical piazza in downtown Rome. They carried banners that read “stop the planet’s fever’’ and asked passers-by to sign a petition calling on world leaders to reach a deal to reduce emissions.

The draft distributed to the 192-nation conference set no firm figures on financing or on cutting greenhouse gas emissions.

The draft continues the system for industrial countries set up in the 1997 Kyoto Protocol by which they are legally bound to targets for emission reductions and face penalties if they fall short. It makes no similar requirements of developing countries like China and India, which have pledged to reduce the growth rate of emissions but reject the notion of turning those voluntary pledges into legal commitments.