Ahead of climate summit, ‘sleep-outs’ point to energy use 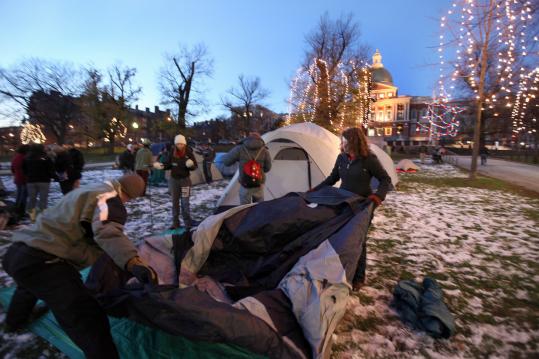 There is not just strength in numbers. There is warmth, too.

Night after night, in bustling college quads and quaint town greens, on urban fire escapes and the storied Boston Common, scores of college students have taken sleeping bags to hard earth and huddled under billowing tents. For six weeks they have done this, forsaking the comfort of the indoors as a grand gesture about what is happening outdoors - and the connection between the two.

They are protesting what they call “dirty electricity,’’ power generation that pollutes the environment. So, last night, on the eve of the UN Climate Change Conference in Copenhagen, they massed one last time in the shadow of the golden dome of the State House, colorful tents rising amid the crunch of icy snow underfoot.

And as they decried the warming of the planet, they plotted their strategies for staying warm on a frosty late autumn night. “There will be six of us in the tent,’’ said Rebecca Siegel, a 21-year-old Hampshire College student. “So we’ll be pretty cozy. I hope.’’

Every Sunday, starting Oct. 25, students and others have arrived at the Common laden with sleeping bags, backpacks, and “lots of layers,’’ said Sarah Yoss, a 21-year-old Tufts University senior. “I usually sleep pretty well, until the cops come and wake us up.’’

Boston police have cited the students, whose group is newly known as Students for a Just and Stable Future, for trespassing because it is illegal to stay overnight on the Common.

The cause that has drawn students to the Boston Common on Sundays - and to greens on college campuses and in surrounding towns during the rest of the week - is the same one that is luring world leaders to Copenhagen.

They are concerned about carbon dioxide and other emissions, and the complexities surrounding environmental issues.

“People think it’s going to get hot and some polar bears are going to drown and maybe we’ll have to move the beach back a few feet,’’ said Craig Altemose, coordinator of the student group and a fourth-year student at Harvard’s law and Kennedy schools. “I don’t think people realize that the economic, political, and social stability we have relied on for a couple of centuries is going to be under dire threat.’’

The Boston Common “sleep-outs’’ have attracted as many as 200, said Altemose, who was expecting 100 last night. Nearly that many had already flocked there as evening descended and holiday lights draped on bare trees began to twinkle.

The nearby Church on the Hill offered toilets and, in a nod to weary students on the cusp of final exams, Internet access for laptops.

There is, the students said, nothing paradoxical about their need for electricity even as they lament the way much of it is produced today.

They are not, they stressed, advocating a return to an agrarian society.

Instead, they are championing cleaner forms of energy production, a cause embraced by state Representative William Brownsberger, a Belmont Democrat planning to introduce legislation to establish a task force to explore how all the state’s power can be clean by 2020.

To illustrate that pursuit, the students said that at 9:30 this morning, they will position windmills along the sidewalk bordering the State House.

“A lot of environmentalists get a bad rap for saying that everyone should go back to ‘Little House on the Prairie’ and eat granola,’’ said Sam Rubin, 19, who dropped out of Oberlin College to dedicate himself to environmental activism. “We really like electricity, we really like that we have cell phones and laptops and all the amazing things they let us do. But we don’t feel the cost of those things should be climate change.’’