Financing of pact may emerge as key to agreement 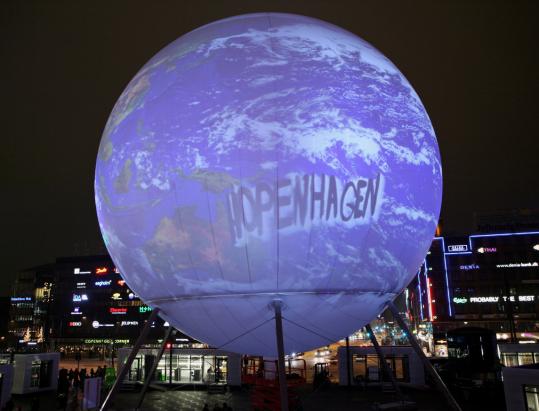 Delegates from 192 nations converged on Copenhagen yesterday for the start of the two-week summit. More than 100 heads of state and government have said they will attend the event. (Miguel Villagran/ Getty Images)
By Arthur Max Associated Press / December 7, 2009

COPENHAGEN - Delegates converged yesterday for the grand finale of two years of tough, sometimes bitter negotiations on a climate change treaty, as UN officials calculated that pledges offered in the last few weeks to reduce greenhouse gases put the world within reach of keeping global warming under control.

“Time is up,’’ de Boer said on the eve of the 192-nation conference. “Over the next two weeks governments have to deliver.’’

Yesterday, South Africa became the latest country to announce an emissions target. It said that over the next 10 years it would reduce emissions by 34 percent from “business as usual,’’ the level they would reach under ordinary circumstances. By 2025 that figure would peak at 42 percent, effectively leveling off, and thereafter begin to decline.

“This makes South Africa one of the stars of the negotiations,’’ said the environmental group Greenpeace.

President Obama’s decision to attend the conclusion of the two-week conference, after phone consultations with other heads of state, was taken as a signal that an agreement was getting closer. He originally planned to make an hourslong stop in the Danish capital this week.

More than 100 heads of state and government have said they will attend the last day or two, making Copenhagen the largest and most important summit ever held on climate.

“Never in the 17 years of climate negotiations have so many different nations made so many firm pledges together,’’ de Boer said. “It’s simply unprecedented.’’

Obama said he would commit to an emissions cut of 17 percent, compared with 2005 levels, even though those Congress has not yet approved those reductions.

The United States can show flexibility, even if it cannot raise its emissions offer, said Jonathan Pershing, the senior US delegate at the talks. He said the Obama administration was showing its seriousness through budget allocations and regulatory actions on big polluters.

Pershing defended the US position as a radical change from its previous policy.

Pending Senate and House bills would reduce carbon dioxide emissions by 17 percent to 20 percent by 2020, compared with 2005 levels. Based on 1990 levels, the standard UN benchmark, that is only a 3 percent to 4 percent reduction, a contribution far short of what scientists say is needed among industrial nations.

A study released yesterday by the UN Environment Program indicated that pledges by industrial countries and major emerging nations fall just short of the reductions of greenhouse gas emissions that scientists have said are needed.

“For those who claim a deal in Copenhagen is impossible, they are simply wrong,’’ said the UN Environment Program director, Achim Steiner, releasing the report compiled by British economist Lord Nicholas Stern and the Grantham Research Institute.

Environmentalists have warned that emissions commitments were dangerously short of what UN scientists have said were needed to keep average temperatures from rising more than 3.6 degrees.

But most of those warnings were based on pledges only from industrial countries. The UN report included pledges from China and other rapidly developing countries, which in turn were contingent on rich-country funding to help.

All countries together should emit no more than 44 billion tons of carbon dioxide by 2020 to avoid the worst consequences of a warming world, the report said.

Computing the high end of all commitments announced so far, the report said emissions will total some 46 billion tons annually in 2020. Emissions today are about 47 billion tons.

“We are within a few gigatons of having a deal,’’ Steiner said. “The gap has narrowed significantly.’’

Negotiations on a new climate treaty began in earnest two years ago with the aim of crafting a successor to the 1997 Kyoto Protocol, which bound industrial countries to cut emissions of carbon dioxide and other earth-warming gases from 1990 levels, but which made no obligations on countries such as India and China. That omission caused much resentment and the United States rejected Kyoto.

Months of deadlock were broken in the past few weeks when China and India announced voluntary targets for lowering the greenhouse gas component of economic growth. Emissions would continue to climb, but at a lower rate. They said, however, they would not accept legally binding targets that could imply consequences if they fall short.