Activists turn up the heat on climate 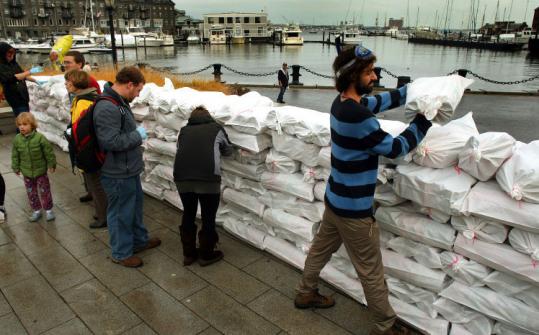 A man wrapped in a wet suit slid belly down near the crowd of 200 people gathered at Christopher Columbus Park, home to one of more than 5,200 events in 181 countries organized for the 350.org International Day of Climate Action.

“I want the earth to survive,’’ said 60-year-old Susan McLucas, a red snorkel pushing up her gray hair. “I don’t want our children and grandchildren to have to rush for higher ground.’’

As people hoisted green and yellow kayaks in the air, Seth Itzkan of Medford held a hockey stick and a poster that read: “Bring back the ice!’’

“People need to understand how important ice is to our climate,’’ Itzkan said. “We need a healthy North Pole.’’

The international gatherings, organized by 350.org founder and Lexington native Bill McKibben, ranged from a submerged group of scuba divers in the Great Barrier Reef in Australia to a potluck in Wellfleet.

“We’re taking the most important number in the world and trying to make it the most well known,’’ said McKibben, who was interviewed by phone yesterday from New York.

Red-shirted climbers in Middlebury, Vt., took their cause to the hills, forming a large 3, 5, and 0 on a craggy mountain.

The students, part of The Leadership Campaign, plan to reconvene on Boston Common tonight and every Sunday until world leaders meet at Copenhagen in December to craft a new pact for global warming.

Craig Altemose, a 25-year-old Harvard graduate student who organized the sleep-out, said he was inspired by 20-somethings who molded the face of protests during civil rights movements.

“People were killed by the police and hit with rifles,’’ he said. “What we’re doing is sleeping outside. Sure it’ll be cold.

“This is about a lot more than drowning polar bears and melting glaciers,’’ Altemose added.

Sunday school students, grandparents, and tourists rang a 2,400-pound bell more than 350 times at King’s Chapel along the Freedom Trail in Boston, one of scores of churches tolling for climate change.

In New Bedford, a 15-foot sailboat hoisted a sail emblazoned with a 350 logo.

Organizers in the fishing city hoped to open up discussion about ocean acidification, a climate change phenomena that could dissolve shells of scallops and oysters.

An actress dressed as Henry David Thoreau was among 50 people picking up bits of trash and spreading seaweed in a giant 350 on a beach in Wellfleet.

Kite surfers and an Australian shepherd named Dune joined in the festivities and photos.

Harriet Korim, a 63-year-old former Wellfleet recycling commissioner along for the cleanup, said people can take baby steps like forgoing beach bonfires to reduce their carbon footprint and bring carbon levels down to 350 (or even 349, the phone exchange in Wellfleet).

“I figure I can do a virtual beach fire,’’ she said, while whipping up a fish chowder with carrots, fennel, and mushrooms for the potluck.

“Instead of having meetings and demonstrations that are the same old, same old, we’re organizing the things we love,’’ she said.