Obama blows in, talks up Patrick and future 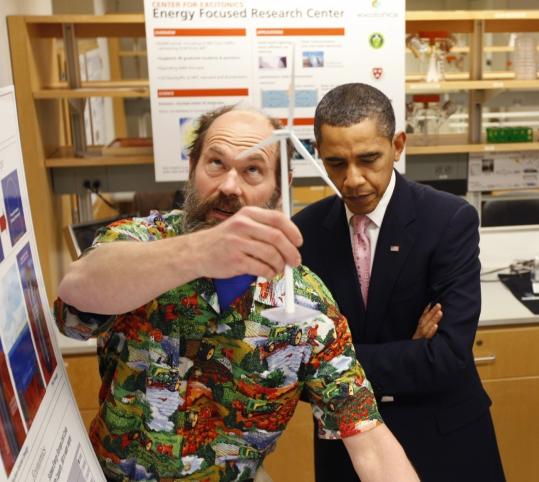 President Obama, on a whirlwind visit to Boston yesterday, linked Governor Deval Patrick’s political fate to the fate of the nation, telling Patrick supporters at a downtown fund-raiser that the governor had made the kind of hard choices the country needs to make to put itself on a stronger course.

Sweeping into town for the fund-raiser and to deliver a speech on clean energy at MIT, Obama said Patrick deserves credit for implementing near-universal health care, investing in education, and making the alternative energy and biotech industries a priority. If voters fail to recognize this hard work in next year’s state election, the president said, it will not bode well for the United States.

“When the people of states reward the courageous and hard-working governors like that, that has implications for our nation as a whole,’’ Obama said at a 125-person reception at the Westin Copley Place.

Otherwise, Obama said, other political leaders will say “then maybe I shouldn’t, as a member of Congress or as a senator, take some chances and take some tough stands in pursuit of that same vision.’’

The fund-raiser, composed of the reception and a larger ballroom gathering, demonstrated one of Patrick’s advantages in what is expected to be a difficult reelection campaign: having the president of the United States, a close friend and political soul mate, shower him with praise and help him raise money. Patrick aides said the fund-raiser would bring in more than $600,000 for him, running mate Lieutenant Governor Timothy Murray, and the Massachusetts Democratic Party - although the events appeared to not be fully booked.

“There’s not a tougher time to be governor than right now,’’ Obama said.

“And yet, without losing his cool, losing that steady inner calm that he has, Deval has gone about the business,’’ Obama continued, highlighting several accomplishments of Patrick’s term, including tougher ethics laws, a push for clean energy, and an overhaul of the transportation system.

Even at MIT, where Obama called on the United States to be a world leader in alternative energy, he made a point of trumpeting Patrick’s leadership, calling him a “champion of science and technology.’’

At the ballroom event, Patrick launched into an animated campaign speech similar to the ones that helped him get elected three years ago. The tone - it was Patrick’s most forceful speech yet in his reelection campaign - was a far cry from the somber nature of his recent appearances, addressing the widening state budget crisis.

“You fired up?’’ Patrick shouted into the microphone after coming onto the stage, using Obama’s trademark rallying cry from the 2008 election. “Ready to go?’’

The governor then ticked off several of what he considers his administration’s big achievements.

“And no, no, I have not yet mastered the ways of the career politician,’’ Patrick said. “I admit that. Because I don’t wake up every day thinking about reelection, or how to make myself look good on the evening news, or how to go along to get along. I wake up thinking about you. How to make a better commonwealth. And there is more to accomplish, so much more.’’

He listed closing the achievement gap in education, controlling health care costs, and creating more jobs among his biggest priorities.

“Give us four more years, and we will finish what we started,’’ he said.

The Massachusetts Republican Party seized on Obama’s trip to point out several of Patrick’s missteps in its “Memo to the White House Traveling Press Pool.’’ Referring to Patrick as “Disappointment Deval,’’ the memo noted his low approval ratings, the high unemployment rate in the state, and the political heat he has taken for signing a boost in the sales tax rate this summer.

Air Force One touched down yesterday at Logan International Airport at 11:27 a.m. on a windy, overcast day. Stepping off the plane, Obama, accompanied by Senator John F. Kerry, gave Patrick a huge grin, a handshake, and a big hug.

Before Obama’s speech at MIT, Patrick and Kerry looked on as Obama toured a lab with MIT’s president, Susan Hockfield. Two professors demonstrated a high-power battery that can be grown, using a biological process, rather than manufactured. Another professor showcased wind turbines, and a third showed off light bulbs that can last 5,000 hours.

Obama came to Boston two years to the day after Patrick endorsed his presidential campaign in a speech on Boston Common, and Obama made sure to repay the political favor. Obama said Patrick, like himself, is forced to make a difficult political argument - that things would be even worse if he were not in power.

Obama also highlighted some of the differences between running on a message of hope and change, as he and Patrick did, and then accomplishing things while in office.

“Campaigning before you’re governor is always easy, because everybody projects onto you whatever they think should happen,’’ he said. “Governance . . . means inheriting problems and having to grapple with them.’’

The message had particular resonance coming from a president who, like Patrick, swept into office with a huge amount of political capital, but is now bumping up against the hard realities of getting his agenda enacted.

Obama, who was slated to raise money later in the day for Senator Chris Dodd of Connecticut, who also faces a tough reelection fight, did not wade into the Massachusetts race to fill Edward M. Kennedy’s Senate seat. But the Democratic candidates made sure to have a presence.

US Representative Michael Capuano and Attorney General Martha Coakley went to the MIT speech, and Obama pointed them out in the audience. Capuano, Alan Khazei, and Stephen Pagliuca were at the fund-raiser, but Capuano was the only one who earned a presidential shout-out.

“I know that my great friend, Congressman Mike Capuano, is in the house, so give Mike a big round of applause,’’ Obama said.

But the president’s main goal was to give a big boost to Patrick.

“I want everybody on the battlefield,’’ he said. “I want you knocking on doors. I want you to make phone calls. We’ve got a lot of work to do.’’