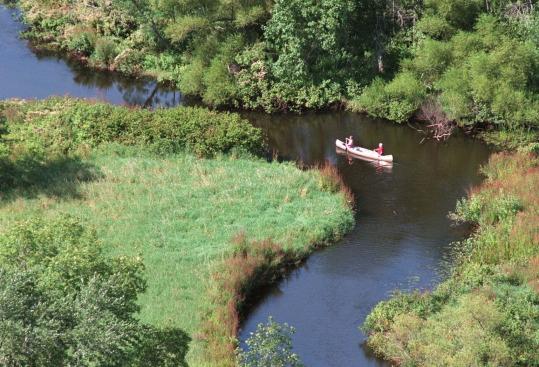 The Ipswich River has suffered from fish kills in the past because the state allowed it to be pumped dry. (Mark Wilson/ Globe Staff/ File)
By Beth Daley Globe Staff / October 15, 2009

Members of the Conservation Law Foundation, Charles River Watershed Association, Ipswich River Watershed Association, and Clean Water Action sent a joint resignation letter to Governor Deval Patrick saying the policy “removes any environmental consideration’’ from decisions about how much water is safe to remove from a river basin for industry, agriculture, or household use.

The resignations are the most significant break yet between environmentalists and the Patrick administration, which has largely enjoyed the groups’ support. They also underscore the growing pressure on the state’s 11,000 miles of rivers and streams for lawn watering and other uses as development spreads out from Boston. Today, 160 rivers and streams already suffer from low flows or water levels.

“This move makes a mockery of sustainable water management,’’ said Peter Shelley of the Conservation Law Foundation. The groups pulled their representatives from the state Department of Environmental Protection’s Water Resources Management Advisory Committee, saying the panel - specifically assembled to help guide the state on water issues - was not consulted on the state’s new approach.

The groups said the new water policy could allow much larger amounts to be withdrawn from stressed rivers such as the Charles and Ipswich. For example, the new policy could allow an additional 22 million gallons to be taken from the Ipswich River, they say. The river, largely considered to be the most stressed in the state, has suffered from fish kills in the past because the state allowed it to be pumped dry. Brook trout, a local favorite, have all but disappeared from the parched upper Ipswich.

State Department of Environmental Protection Commissioner Laurie Burt defended the state measure late yesterday, saying the new policy will help set Massachusetts on a path to sustainable water withdrawals. She said the groups were informed of the state’s new policy before it was formally announced last week.

“I am confident this will end up in a much better place than where we have been in the last decade,’’ Burt said in an interview.

At issue is the interpretation of “safe yield’’ - long considered by state officials and environmentalists as the amount of water that can safely be taken from a waterway during a drought while protecting fish and other river life. The state was directed to determine the “safe yield’’ of river basins in the 1986 Water Management Act, but has struggled since then to come up with a formula to calculate the amounts for each waterway.

Now, the state has finally issued a formal definition of safe yield, describing it as “the amount of water that would be present during a drought year’’ for each of the state’s 27 watershed basins, according to a statement from the Executive Office of Energy and Environmental Affairs.

Burt said the state will develop stream-flow criteria to ensure rivers and streams are managed with the environment in mind. Safe yield is just one of 10 factors - economics and time of year are among the others - that help the state determine how much water can be withdrawn from a waterway, she said.

But environmentalists say the new interpretation could result in severely taxed waterways, especially as the state prepares to issue 20-year water withdrawal permits to communities and water departments across the state. They say it could take years to come up with stream-flow criteria and, in the meantime, rivers could be drawn down until they are muddy or rock-strewn footpaths.

With about 4 feet of rainfall a year, Massachusetts has long escaped the water woes so visible in the Western United States. The enormous Quabbin Reservoir provides ample water for drinking, showering, and lawn watering to dozens of communities in Eastern and Central Massachusetts and has so much left over its managers want to sell it. Yet suburban and rural communities outside that system have to draw water from rivers and wells, some from sources that are becoming increasingly stressed.

A new state Department of Fish & Game report found that river fish are disappearing from many Massachusetts waterways - including the upper Charles and Blackstone rivers, in part because too much water is being taken from them. Native bait fish, such as common shiners, have plummeted in the Blackstone, in Central Massachusetts.

Aspects of the state’s new sustainable water policy were praised by some environmentalists when it was announced. But by yesterday, even the president of The Environmental League of Massachusetts, who was quoted in a state news release last week supporting the plan, said he had a problem with the safe yield definition.

“Our obligation is to ensure the environment is protected,’’ said George Bachrach of the Environmental League. He said the safe yield definition is “basically saying trust us.’’

State Representative Frank Smizik, a Brookline Democrat who chairs the House Committee on Global Warming and Climate Change, said the state was working to balance conservation and economic needs.

“They are going to base the stream flow [criteria] on science,’’ he said. “I think this can be worked out.’’