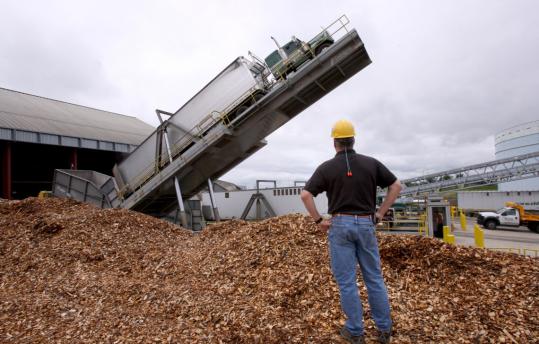 PORTSMOUTH, N.H. - Along the banks of the Piscataqua River, an ancient energy source is being transformed into retro chic renewable power.

Every minute, a conveyor belt dumps about a ton of matchbook-sized wood chips into a seven-story-tall boiler that generates enough electricity to power 50,000 homes and, in the process, supporters say, helps combat global warming.

Wood - or biomass as it is often called - is hailed by many environmentalists, scientists, and politicians as a renewable energy source because it can easily be replenished by planting trees - and because the new trees will, over time, absorb the greenhouse gases the power plants emit.

But with more than 10 wood-burning power plants proposed throughout New England - including three extraordinarily controversial proposals in Western Massachusetts - wood’s green credentials are coming under attack. Just like wind projects, where concerns about bird safety and aesthetics have stalled dozens of proposals, biomass is the latest alternative energy source to undergo deep public scrutiny.

More than 400 people packed a Greenfield school last month to protest a proposed biomass plant there, for example. And, sparked partly by the opposition, Massachusetts energy and environmental officials are launching an in-depth review of biomass, from how the fuel is harvested to how quickly new trees can recapture the heat-trapping gases emitted from burning wood. Biomass plants burn virtually any wood material - from stumps to whole trees to branches and treetops left over from logging.

“Everyone says it is sustainable, but how do we know it is?’’’ said Mary Booth, an ecologist and cofounder of the Massachusetts Environmental Energy Alliance, a research and advocacy group that opposes large wood-burning power plants. While many biomass developers promise to burn wood leftover from logging or tree-trimming operations her group fears vast tracts of forests will be heavily cut. “There is no definition . . . no rules,’’ she said.

Advocates acknowledge that biomass will never make up a huge part of US power production, maybe somewhere between 5 percent and 10 percent by 2030. Today in New England, less than 3 percent of electricity comes from biomass.

Yet supporters say burning trees is important because, in the end, they don’t add any heat-trapping gases to the atmosphere that contribute to global warming. Biomass power plants do emit these gases, supporters say, but the same amount is reabsorbed by new trees planted to replace the burned ones - essentially recycling the pollutants over and over again. Fossil fuels, like coal, are extracted from deep in the earth and add extra gases to the atmosphere. Decades of burning fossil fuels has emitted so many heat-trapping gases, there is no natural way to absorb them all.

A growing number of states are adopting rules, or plan to, to ensure that biomass fuel is green, including potentially banning the burning of wood from threatened landscapes and requiring environmentally sensitive logging practices. Environmentalists, meanwhile, are working to ensure federal climate legislation includes rules for biomass.

“Biomass is an important piece of the puzzle . . . now it’s [about] how to do it right,’’ said John Rogers of the Union of Concerned Scientists, a Cambridgebased advocacy group.

Today, coal-fired plants power more than half of the United States. Scientists want to replace some of them with solar panels and wind turbines because they do not generate heat-trapping emissions. But wind is variable and clouds often block the sun, making these energy sources intermittent. In contrast, biomass provides constant power for businesses and homes as long as there is wood. And Massachusetts, like a majority of states, rewards biomass plants with lucrative renewable energy certificates that electricity suppliers need to buy to meet energy goals. It’s the main reason for the increase in proposed plants. With these certificates, wood becomes inexpensive to burn, competitive with coal and natural gas.

Wood energy is not a new concept in New England. About 15 biomass power plants exist today, according to the Biomass Power Association, an industry group, and a burgeoning movement is underway to heat more schools and homes with wood. But opponents say new large biomass plants would wreak havoc on the region, not only because of constant truck traffic and smog-causing pollution, but because the plants would place extraordinary pressure on the region’s forests.

“The beautiful contiguous forest is what makes Western Massachusetts so unique,’’ said Jana Chicoine, who has organized citizens to protest a proposed biomass plant in Russell designed to power 50,000 homes. “These plants pose a serious threat to the gorgeous landscape.’’

Two other projects are proposed in Western Massachusetts - a large plant in Greenfield and a slightly smaller one in Springfield that mostly would burn recycled construction and demolition material. Environmentalists and residents are upset that state officials recently concluded that the Greenfield and Springfield plants do not require in-depth environmental reviews.

Most of the wood in Western Massachusetts would probably come from private lands, biomass industry executives say. Still, state forests may experience more cutting because of biomass use, state officials acknowledge. But they argue that this would be beneficial, because they want to thin the forests to make them healthier, but have had little means to pay for the process. Revenue from biomass sales would allow them to do the work.

“We’re not going to manage our forests in an ecologically unsustainable way because of the increasing interest in biomass,’’ said Ian Bowles, Massachusetts secretary of energy and environmental affairs. Still, he said, “the time has come to ask the hard questions’’ about biomass.

A biomass plant producing enough power for 1,000 homes needs roughly 13,000 tons of wood a year, said Eric Kingsley of Innovative Natural Resource Solutions LLC, a forestry consultant based in Maine. To harvest trees in a sustainable way for those 1,000 homes, which means cutting a small amount each year and allowing new trees to grow back to replace them, a plant would need about 9,000 acres of forest. But others say much more forest land is required.

To make biomass economically feasible, plants must get their wood from close by to reduce transportation costs. That’s why few large plants - plants that power more than 50,000 homes - and biomass alone will not solve New England’s needs.

In Portsmouth, the wood-burning power plant at Schiller Station replaced one of three coal-burning boilers in 2006. Its fuel largely comes from within a 60-mile radius, but sometimes it comes from Central Massachusetts and Cape Cod.

Every week, 300 to 400 trucks laden with wood chips back up to an unloading dock to dump the debris into a hopper. The wood travels along a conveyor belt to a sorting screen, where small chips pass through and eventually are burned for power. A wood chipper breaks up large pieces, which are then also burned.

“We’ve had six or seven biomass plants up here since the ’80s, and we’re not running out of trees,’’ said Jasen Stock, executive director of the New Hampshire Timberland Owners Association, a group of mostly private landowners.

Still, as more biomass projects are proposed in New England and across the country, some environmentalists say, there is another larger, troubling question: Re-growing trees will take decades to absorb the heat-trapping gases burned in biomass plants. If reducing emissions is critical now, should we burn so many?

“We need to figure out a way to adapt biomass to meet the 21st-century needs of climate change,’’ said Sue Reid of the Conservation Law Foundation, an advocacy group.