Says the problem is a matter of urgency, security 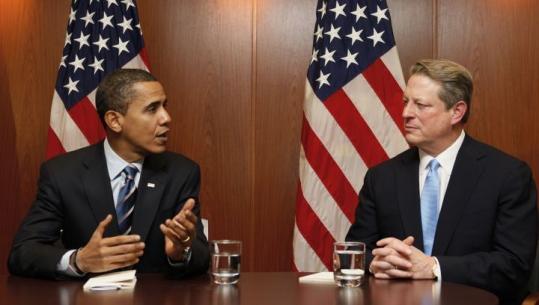 WASHINGTON - When Bill Clinton took office in 1993, global warming was a slow-moving environmental problem that was easy to ignore. Now it is a ticking time bomb that President-elect Barack Obama can't avoid.

Since Clinton's inauguration, summer Arctic sea ice has lost the equivalent of Alaska, California, and Texas. The 10 hottest years on record have occurred since Clinton's second inauguration. Global warming is accelerating. Time is close to running out, and Obama knows it.

"The time for delay is over; the time for denial is over," he said Tuesday after meeting with former Vice President Al Gore, who won a Nobel Peace Prize for his work on global warming. "We all believe what the scientists have been telling us for years now that this is a matter of urgency and national security and it has to be dealt with in a serious way."

Obama is expected today to name Nobel physics laureate Steven Chu as his energy secretary and former Environmental Protection Agency chief Carol Browner as the head of a new council that will coordinate White House policy on energy, climate, and environment.

There are powerful political and economic realities that must be quickly overcome for Obama to succeed. Despite the urgency he expresses, it's not at all clear that he and Congress will agree on an approach during a worldwide financial crisis in time to meet some of the more crucial deadlines.

Obama is pushing changes in the way Americans use energy, and produce greenhouse gases, as part of what will be a massive economic stimulus.

After years of inaction on global warming, 2009 might be different.

Obama replaces a president who opposed mandatory cuts of greenhouse gas pollution and it appears he will have a willing Congress. Also, next year, diplomats will try to agree on a major new international treaty to curb the gases that promote global warming.

"We need to start in January making significant changes," Gore said in a recent telephone interview with the Associated Press. "This year coming up is the most important opportunity the world has ever had to make progress in really solving the climate crisis."

US emissions have increased by 20 percent since 1992. China has more than doubled its carbon dioxide pollution in that time.

World carbon dioxide emissions have grown faster than scientists' worst-case scenarios. Methane, the next most potent greenhouse gas, suddenly is on the rise again and scientists fear that vast amounts of the trapped gas will escape from thawing Arctic permafrost.

In the early 1990s, many scientists figured that the world was about a century away from a truly dangerous amount of carbon dioxide in the atmosphere, said Mike MacCracken, who was a top climate scientist in the Clinton administration. But as they studied the greenhouse effect further, scientists realized that harmful changes kick in at far lower levels of carbon dioxide than they thought.

Now some scientists, but not all, say the safe carbon dioxide level for Earth is about 10 percent below what it is now.