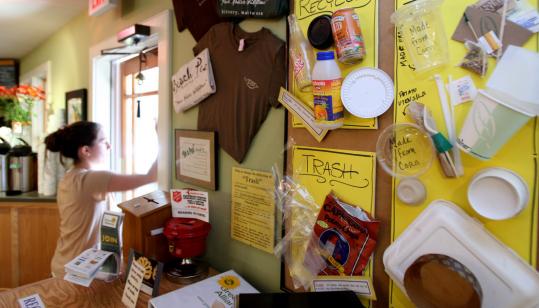 KITTERY, Maine - Mariah and Tom Roberts like to talk trash. All of the customers at Beach Pea Baking Co. are reminded about recycling at the refuse bins, educated about it on the cafe's tables, and told about the bakery's pledge to use only what is necessary. Mariah scours restaurant vendors for environmentally friendly products, such as compostable utensils made from potatoes. Even the butter pats here are wrapped in biodegradable paper, rather than metal-lined packets.

As a result, at Beach Pea, when it's time to dispose of your juice bottle or toss your napkin after nibbling on an oversized chocolate-drizzled croissant or a thick lemon bar, you'll find three clearly labeled bins: recycle, compost, and trash. And the trash receptacle is the least full. On any given day, a mere three bags leaves the shop, even after 300 to 600 customers pass through. Ninety-five percent of the bakery's waste is recycled or composted.

Since owners Mariah and Thomas Roberts opened in 2001, they have been about as green as they can possibly be. In fact, this couple is so passionate about their recycling program and sustainable practices that they nearly forget to talk about the actual sweet offerings. As for the confections, they're made with pure ingredients. "We didn't want to sell anything to anyone that we wouldn't cook in our own house," says Mariah. You won't find corn syrup, white sugar, white paper bags, or bleached napkins here.

The husband and wife team, who are natives of Portsmouth, N.H., had worked in enough restaurants to know that they didn't want to be like everyone else - with tons of trash, energy waste, and unnecessary plastic. So they started out using sustainable practices and took serious measures to tread as lightly as possible with regard to ingredients, electricity, and utensils. They source as much food locally as is possible. Breads are made with unbleached, unbromated, and often organic flour, and berry scones are studded with blueberries and raspberries, locally grown when in season.

At lunch fresh, healthful salads and sandwiches use the bakery's crisp French baguettes and the Robertses see to it that no processed products are brought into the kitchen. The couple make their own spreads and salad dressings and roast their own meats. All the bakery's ingredients come from local distributors.

In 2007 Beach Pea, named for the wild flowers that grow along the water, generated 85,000 pounds of trash, but 90 percent of it was composted. The rest was sent to a processing facility in Biddeford, Maine, where it was burned for electricity. "You have to have dedication as owners to teach people to dispose of trash properly," says Tom. "But I think it's been a useful tool for our community. It's interesting to see people get excited about it." Mariah would like to see other restaurants in the Seacoast area follow their lead. In fact she spends a good chunk of time fielding calls from restaurant owners who are interested in going green.

For them, it all starts in the kitchen with time, patience, and dedication. "Bakeries can be more connected to the community," says Tom. Adds Mariah, "You're creating a sense of place for people rather than just being a servant." When customers leave the shop, compostable brown bag in hand, a tempting little confection tucked inside, they can feel good about eating.