US backing of wind farm could come this week 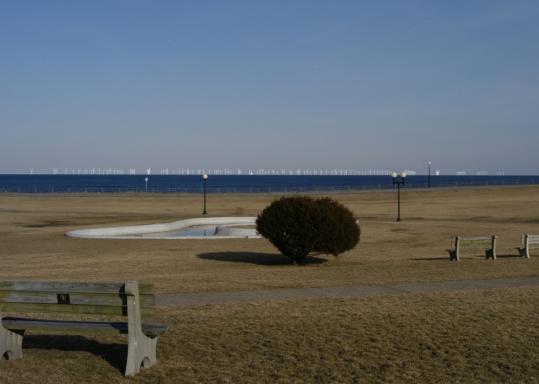 This computer-generated image showed what a view of Cape Wind farm would look like from Oak Bluffs. The developer expects the turbines will produce 170 megawatts of power a year.
By Bina Venkataraman Globe Correspondent / December 2, 2008
Text size – +

The Bush administration is expected to issue as early as Friday a favorable final environmental review of the nation's first offshore wind farm project, clearing the way for Cape Wind to obtain a federal lease to erect 130 wind turbines in Nantucket Sound.

Nicholas Pardi, a spokesman for the Minerals Management Service, said last week that the agency, part of the Interior Department, is planning to release its findings "by the end of the year." Supporters of the project who have been told of the agency's timetable said a favorable review should come in the next few weeks and possibly on Dec. 5.

Interior Secretary Dirk Kempthorne would then have to wait 30 days to make the decision official and award the lease allowing the project to be located in federal waters. The supporters, as well the leader of the main opposition group, said they believe the administration wants this accomplished before Inauguration Day, Jan. 20.

Final state backing could follow early next year, said a spokesman for the state's Executive Office of Energy and Environmental Affairs, culminating the developer's long struggle to gain approval for what seemed like a green power pipe dream when it was announced seven years ago: A giant wind farm anchored in the waters off Cape Cod.

"This is important not only for Massachusetts but for the nation as a whole," said Jack Clarke, director of public policy and government relations for Mass Audubon, a conservation group that came out in support of the project after evaluating its impact on wildlife.

Mark Rodgers, communications director for Cape Wind, said the company predicts the $1 billion project could be operating by 2011, though opponents have said they will go to court to try to block it. The developer expects the turbines to produce about 170 megawatts of power a year, equivalent to almost three-quarters of the average electricity demand for the Cape and Islands.

The proposal from a once little-known company has endured years of environmental review, several rounds of political maneuvering by the likes of Senator Edward M. Kennedy and former governor Mitt Romney, and strong opposition from a group of homeowners on the Cape and Islands. They worry that the 440-foot-high turbines, visible on the horizon, would mar their views, depress property values, and deter tourists. But the project has gained momentum as the public's appetite has grown for renewable energy to help forestall global warming. The turbines would be placed about five to eight miles from the Cape coast.

The Minerals Management Service signaled its inclination to approve the project when it issued a draft environmental review in January, which concluded that it would cause little harm to migratory birds and fish and have a "minor" impact on tourism. The agency solicited comments on the draft report from the public and from state and other federal agencies, and they will be considered in the final environmental impact statement.

Last month, the US Fish and Wildlife Service forwarded a report to the minerals agency saying that the project would not jeopardize the survival of two bird species protected under the Endangered Species Act, piping plovers and roseate terns.

Aside from the final environmental review, Cape Wind cannot get its lease until the agency finalizes federal regulations governing offshore wind projects, scheduled for completion by the end of December.

At the state level, the Office of Coastal Zone Management must still approve the project, and Cape Wind is seeking a "composite" permit that will wrap several remaining local permits into one, quicker approval process, said Robert Keough, spokesman for the energy and environmental affairs agency. He said that these steps could be concluded "weeks" into the new year.

But the project is expected to face new obstacles, including the financial crisis.

"Now is not a good time to raise money for anything," said Ethan Zindler, head of North American research for New Energy Finance, a company that sells research to renewable energy investors. "But the good news about that project is that it is going to potentially provide a massive amount of clean energy in a very tight market."

Massachusetts' requirement that a certain percentage of the state's electricity come from renewable energy ensures wind power will have a market, said Zindler, and may help Cape Wind attract financiers despite the economy.

People on all sides predict legal challenges as well. The Alliance to Protect Nantucket Sound, which opposes Cape Wind, is already pointing to what it sees as flaws in the federal approval process. The group believes the outgoing administration has overlooked environmental and aviation safety concerns in a rush to approve the project. The environmental review may be issued before the Coast Guard and Federal Aviation Administration have completed their final studies of the project, but their analyses of Cape Wind's impact on navigation and air safety could be incorporated into the terms of the lease.

The Minerals Management Service "is trying to shortcut the review process and pressure other agencies to get this approved under the Bush Administration," said Audra Parker, the alliance's executive director. "We are prepared to do what it takes to defeat this project, and if that requires litigation, we will do that."

Others believe the decision is coming too late.

"The big picture failure to get this zero-emissions renewable generation online in New England is a real shame," said Seth Kaplan of the Conservation Law Foundation, a Boston-based environmental advocacy group. "It's hard to find a silver lining to that cloud that we have allowed this much time to go by."

From Cape Wind's perspective, the financial crisis aside, the wind is blowing in the project's favor. "We're very encouraged," said Rodgers. "With the incoming Obama administration, you are seeing that people link our energy and environmental challenges directly to our economic challenges."

Clarification: A Page One story yesterday about the Cape Wind energy project was unclear in describing the power the developer expects the wind farm to produce. It should have said the turbines' projected power output is 170 megawatts, when averaged over an entire year.