For first-timer, Boston by bike is an achievement 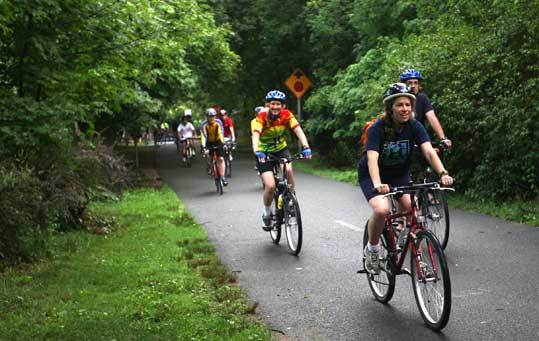 It was long. It was tiring. The traffic was frightening. But, oh, what a sense of pride and self-righteousness when we were done.

For one day, at least, I beat the cost of fuel and the guilt of contributing to rush hour: I finished the ride from Lexington to Boston last month on Bike Friday, a monthly event sponsored by the City of Boston as part of its Boston Bikes program to provide guided commutes-by-bike from the suburbs to Government Center.

As one of several groups pedaling into the city from different directions, cyclists from this region convened at Lexington Center to follow the Minuteman Bikeway to Alewife, then to Davis Square, through Cambridge, and on to Boston, ending with the rest of the rides at City Hall Plaza.

At the Hancock Street intersection in Lexington at 6:50 a.m. that Friday, I found four official guides and two police escorts marshaling the group. The leader collected signed waivers while I took stock of the dozen or so cyclists around me. Most of them appeared to do this or a ride quite like it every day; I suspected I was the only one who wasn't absolutely sure she could handle the challenge.

While waiting for our departure, I met Sean Stinson of Pepperell. Avidly committed to his green commute, he described his typical daily schedule to me: He leaves his home to ride along the Nashua River Rail Trail from Pepperell to Ayer, where he boards the commuter rail to Boston. He disembarks at North Station and walks a mile to his office at Genzyme in Cambridge.

Stinson admitted that his commute is long - he leaves his home at 5:15 most mornings and gets to work about 7:30 - but said it is gratifying.

"I'm getting exercise; I'm saving money by not buying a gym membership, since this replaces the need for a workout; and I'm not spending $4 a gallon on fuel to drive to work every day," he said.

We pushed off at precisely 7 a.m., after a short safety talk from our police escorts. A mile or so east of Lexington Center, three women caused momentary mayhem by leaping into the path and thrusting their signed paperwork at the lead police escort. All of us screeched to a halt as the officer pointed out the bike guide who was collecting paperwork. Clueless people posing a hazard, I mused: Maybe this wouldn't be so different from commuting by car after all.

Emerging from the Minuteman Bikeway at Alewife, we threaded our way along the brick-lined Somerville Bikeway to Davis Square. From there on, it was street riding; no more traffic-free bike paths. Things got hairy, in my novice opinion, approaching Harvard Square. Riding in the middle lane, surrounded by cars, I felt somewhat buffered by the fact that there were so many of us together - we had swelled to a pack of about 50 since leaving Lexington - but it still felt a little like taking a stroll among a herd of wildebeests.

As we continued through Central Square, I tried to make a mental comparison between bicycling and two other types of commuting: car and public transportation. If I were in my car then, I'd be hating the traffic just as much as I was on my bike, though it would be out of inconvenience, not fear. On the plus side, I'd be listening to "Morning Edition" and maybe sipping some good hot coffee. Instead I was squirting lukewarm water into my mouth and trying to keep my mind off the return trip, which I'd be doing alone, since all the other riders were real commuters who would spend the day working in the city. I needed to be back in my home office by midmorning.

On the other hand, if I were in a car I'd be thinking about how to find time for a good workout - something that wouldn't be a concern for me on this day. And as for public transportation? No traffic to worry about. Hot coffee and "Morning Edition" available. Public transportation was winning the contest so far, I had to admit.

At 8:32, our group rolled into City Hall Plaza, greeted by music, complimentary muffins, and assorted giveaways. I felt great about succeeding at the ride, but I didn't think I could do it regularly. True, the benefits were obvious: lower fuel costs, less pollution, a good daily workout, time spent outdoors - quite likely the only time I'd have outdoors at all, some days - and an indisputable sense of well-being. With a clean, accessible locker room for showering at work and an endless series of cool sunny days like the one July's Bike Friday fell on, maybe it would be possible.

But with the realities most people face of the occasional (or frequent) 10- or 12-hour work day and the vicissitudes of New England weather . . . maybe not.

Happily, I don't have to decide right now, since I work at home. Relieved to be back just under five hours after leaving my house, I booted up my computer and started scanning e-mails. Deadlines and phone messages beckoned, and that morning I felt pure gratitude for what was surely the best commute in the world: the one down the hall.

The next Bike Friday takes place tomorrow. To register or find out about future events, go to cityofboston.gov/bikes.

Nancy Shohet West can be reached at nancyswest@msn.com.